This Government is intent on undermining our public institutions. And nowhere is this more evident than with the ABC and NBN.

It’s not only an ideological thing (small government), but a practical measure aimed at tightening the Coalition’s grip on power — now and into the future.

The general rule is to underfund public services, wait for the system to break down and public dissatisfaction to peak, and then sell the agency off to wealthy supporters at fire-sale prices. These friends will then reward the people in power with party donations and comfortable stipends at the end of their political careers.

This is the rightwing way — and we have seen it happen all around the world, especially in America, where neoliberalism was spawned.

The Coalition are also masters of this technique.

Of course, underfunding is just one way to destroy a public institution. Another is to plant cronies, agents and sleeper cells inside the authority to undermine it from within and stifle internal criticism.

Both of these strategies can be seen at work in the Coalition’s version of the NBN.

In 2010, the Opposition Leader Tony Abbott brought Malcolm Turnbull back to the frontbench with orders to “demolish” the NBN.

"The Government is going to invest $43 billion worth of hard-earned money in what I believe is going to turn out to be a white elephant on a massive scale,” said Abbott at the time.

As Opposition Communications spokesperson, Turnbull relentlessly undermined the Labor Government’s fibre-to-the-home (FTTH) model as being a waste of public money.

With the election of the Abbott Government in 2013, Communications Minister Turnbull continued this work by implementing what he called his multi-technology mix (MTM) solution. This involved using a mongrel mix of fibres, including rolling out thousands of kilometres of copper wire, to transmit data to boxes at the end of the street.

.#ausread9November2018 @acccgovau intervenes to highlight just how bad the situation in #NBN #FTTN is. #Turnbull’s multi-technology mix (#MTM) model – will not be able to repay the loan by the due date @NBN_Australia has failed! Need for bipartisan rethink https://t.co/N4Um04vsrX

As has been extensively reported in IA, this misguided solution has been a disaster. The added complexity of using a variety of materials, including degraded Optus, Telstra and Foxtel networks, has led to poor performance, along with massive cost and time overruns. Expert after expert has said that the original FTTH would have been cheaper to implement, far more efficient and significantly more future proof than Turnbull’s cut-rate MTM network.

Ironically, the network appears to be headed for the “white elephant” status Tony Abbott predicted in 2010. There is now talk of it being sold off to private interests, perhaps Telstra.

Yet NBN Co has been strong in its support for the Government’s disastrous approach. This is because Turnbull seeded the NBN with friends and former business associates, such as in 2013 appointing to the board Justin Milne, a Turnbull business partner at Ozemail.

Interestingly, Turnbull also later appointed Milne to chair the ABC, where recent events show he performed the same role. Similarly, Turnbull used his influence within the ABC to stifle criticism of his NBN. This included getting the public broadcaster to sack technology editor Nick Ross for writing a balanced, comprehensive and well-researched article on Turnbull’s fatally flawed NBN.

Also notable is the fact that the ABC Q&A programme did not permit any questions to former Prime Minister Turnbull about his NBN debacle on last Thursday night’s special edition.

You can read the exclusive IA interview with Nick Ross following his sacking HERE.

The Coalition have also set about systematically undermining the ABC. Since Tony Abbott infamously declared on the eve of the 2013 Election that there would be no cuts to the ABC or SBS, successive Coalition governments have set about slashing money from the ABC budget. This pattern continues under the current Morrison Government.

They have not only done this through appointing Coalition cronies – such as Justin Milne, into key positions on the board – but through all board positions, with the sole exception of the staff-appointed director.

They have also done it through their choices of managing director.

For instance, former Prime Minister John Howard disastrously appointed a Liberal Party crony to head the ABC, Jonathan Shier, in 2000. His deliberate mismanagement was so great he was forced to resign by a less compromised board after less than two years.

Mark Scott was a former Liberal Party staffer in the Greiner Government. He was appointed by Howard as ABC managing director in 2006. He also worked assiduously, although more discreetly (as we have reported extensively on IA) to push the ABC towards the Right and promote the Coalition. (Inexplicably, Scott was reappointed as ABC managing director by the Rudd Government in 2011, further sowing the seeds of its own downfall.)

The sacking of managing director Michelle Guthrie and Justin Milne was well-documented this week by ABC Four Corners. In that programme, the interventions by Turnbull and Communications Minister Mitch Fifield were outlined. These included the clear intent by both to stifle criticism through complaints about senior ABC reporters and also an attempt to have at least one of them, Emma Alberici, sacked. Alberici’s sole crime was to validly question and critique the Right’s holiest of holies, trickledown economics, in the context of planned tax cuts to big business.

This is only half the story. The full version of this editorial was originally published as part of the Independent Australia weekly newsletter and is also available to subscribers online in the members only area. 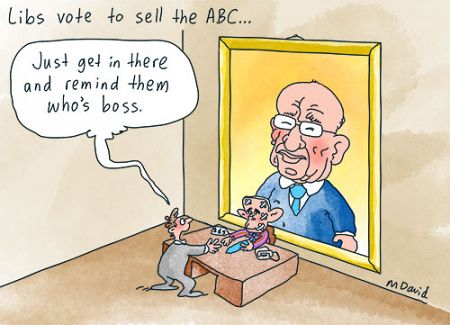