Back in November, as managing editor of Independent Australia, I appeared on ABC’s daily current affairs panel show, The Drum. On it, I was asked about Islamic radicalisation. I started saying I was far more concerned about the rise of the Far Right in Australia, but was quickly cut off. Even on the public broadcaster, pointing out the threat from Fascism and White Nationalism appears to be taboo. Only Muslims and people who look different from us, it seems, are allowed to be exposed.

Unfortunately, the threat from neo-Nazis in our midst is all but imaginary. For instance, you may have noticed “Antipodean Resistance” Swastika stickers appearing in your main street, or your university, or park — or even, as we read last week, in the Jewish nursing home housing your Holocaust survivor parents. This Antipodean Resistance boast 300 members, call themselves ‘the Hitlers you’ve been waiting for’, advocate armed “White Revolution”, and hold regular “radicalisation camps” all around Australia. They target Jewish people, homosexuals and non-white immigrants. In other words, they are terrorists — but you won’t find the Federal Police dedicating any resources to hunting them out.

You can read more about these dangerous fanatics HERE. 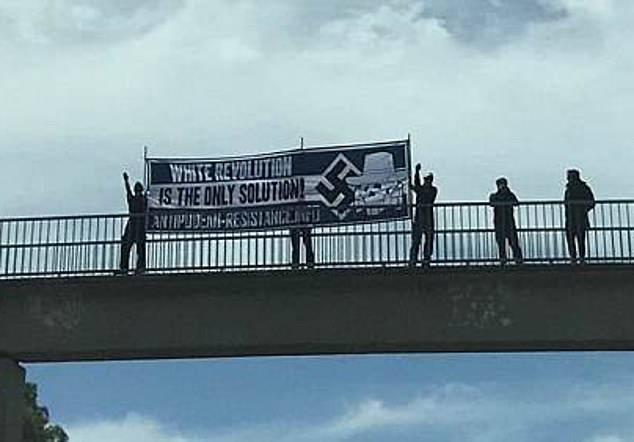 But they are just one of several groups espousing similar ideas, as we saw in Melbourne on Saturday, 5 January, in Melbourne. There, at a rally on St Kilda Beach organised by convicted violent criminals Blair Cottrell and Neil Erikson, far-right nationalists were seen performing Nazi salutes and carrying SS paraphernalia and swastikas. The rally was ostensibly about “reclaiming the beach” from so-called African gangs and these neo-Nazis were also seen violently attacking anti-racism protesters. However, it is notable that 5 January 1919 was the date the precursor to the Nazi Party, the German Workers Party, was founded in Munich.

A Federal Senator, Fraser Anning, used taxpayer money to fly from Queensland to attend this event and was photographed alongside Cottrell and Erikson. Senator Anning described the protesters as “ordinary working people who’d had enough”. This is the same Senator who, in his maiden speech to Parliament, praised the White Australia Policy and spoke of a "Final Solution to the immigration problem". Anning also falsely accused “the Left” of making the Nazi salutes − photographic evidence proved otherwise − and claimed African gang violence was “spreading rapidly to my own state”. This latter claim was quickly rebuffed by both the Queensland Police and the Queensland Premier.

So, now we find Nazi sympathisers have made their way into Australia’s Federal Parliament. It is not hard to imagine what our forefathers, many of whom lost their lives fighting to rid the world of their warped ideology, might think of these developments.

This is only half the story! The unabridged version of this editorial was originally published as part of the Independent Australia weekly newsletter and is also available to subscribers online in the members only area.

I hear people are afraid to go out in Melbourne because of Aryan gangs.