Eaten Fish is dying: What are we doing about it?

This week, the Doc is Mad as Hell about the Coalition Government’s lack of concern about an asylum-seeker on Manus Island who has been on hunger strike for 17 days and is close to death. In this Media Sauce, he explains why and how you should help.

I was wondering aloud why BLeak, who claims he is among the persecuted cartoonists of the world, would not draw a cartoon in support of his locked-up colleagues. His controversial racist attitude to Indigenous people has already been commented on in IA, but he appears not to have a fig for humanity in general either.

Enough about BLeak, on to the good guys

'Zunar is a Malaysian cartoonist currently challenging state-sponsored censorship on multiple fronts. He is subject to a travel ban; is facing multiple charges of sedition; and suffers continual harassment by police and supporters of the government.'

Secondly, Turkish political cartoonist and Courage in Editorial Cartoon Award winner Musa Kart. Musa has spent over 100 days in custody after he and several colleagues from Cumhuriyet newspaper were arrested and charged with ‘crimes on behalf of the Fethullahist Terror Organisation and the outlawed Kurdistan Workers’ Party (PKK)’.

The third locked-up cartoonist is much closer to home. His name is Ali Durrani, also known as Eaten Fish, winner of the 2016 Courage in Editorial Cartooning Award. Ali is currently held in an Australian refugee rendition camp in Papua New Guinea and has been on a hunger strike for over 17 days.

Who is Eaten Fish?

Ali Durrani is a young Iranian man in his mid-20s. He has been on Manus Island for nearly four years and has been told that his application for refugee-status has been refused.

Ali has been sexually-assaulted on Manus, most likely by detention centre guards and other asylum-seekers. As a result, he has severe mental health issues, which have impacted on his ability to properly argue his case for asylum.

You can read Ali’s story in his own words via his public Facebook page.

In a Facebook post, dated 16 February, Ali says he now weighs less than 47 kilos. What is happening to him is a national disgrace that shames our government and anyone who stands by as this happens. 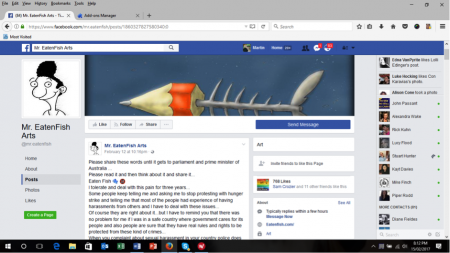 Ali is close to death

According to refugee advocates who are in touch with him, Ali is close to death.

Walkley Award-winning cartoonist and national treasure, First Dog On the Moon, is in almost daily contact with Ali and says it is “very strange” talking to someone who is effectively in “a concentration camp”.

First Dog told IA that despite his horrific ordeal on Manus Island, Ali has “surprisingly, grown stronger over time”.

“He has enormous resolve in the face of the brutal treatment he receives. He is one of the bravest people I know. But it has taken its toll on him.”

According to First Dog, Ali is very fragile, like all of the men on Manus. His mental health is fragile and, now that he’s on a hunger strike, things are “going downhill pretty fast”, First Dog says.

“I have asked him if he is ready to die -

and he says he is not willing to live like this -

I know that I am not ready for him to die.”

~ First Dog On the Moon

It seems, at this late stage, that Ali Durrani’s imminent death is perfectly acceptable to the Australian Government.

This seems a bit brutal, even for a portfolio managed by Sinister Dutton. So I checked in with the Department of Immigration and Border Protection to see if they were concerned, but all I got was an anodyne response:

Please attribute the following to a spokesperson from the Department of Immigration and Border Protection:

The Department does not comment on an individuals’ medical circumstances.

Appropriate medical care is available at the Manus regional processing centre including a mental health clinic currently staffed by psychologists, counsellors and a psychiatrist.

Clearly, the medical care on Manus is not appropriate or adequate, given Mr Fish is close to death.

I wasn’t satisfied with the response from the Department, so I contacted the sinister minister’s office directly, but you know what?

I got the exact same response, word for word that I got from the department, from the same email account.

Here’s the exchange, just so you can see what’s going on.

My email to a media secretary in the Minister’s office:

Good afternoon Staff Member, understanding that you won’t comment on the medical situation with Mr Durrani (which I have plenty of info about anyway from people in direct contact with him), can you please comment on the following.

I would like a response this evening if possible, if not by 12 noon tomorrow.

Best wishes from the desk of the Doc,

Please attribute the below response to a spokesperson from the Department of Immigration and Border Protection.

The Department does not comment on an individuals’ medical circumstances.

Appropriate medical care is available at the Manus regional processing centre including a mental health clinic currently staffed by psychologists, counsellors and a psychiatrist.

I asked the minister for a comment and I get the cut and paste response from a departmental officer.

Clearly, the Australian Government, in all its brutalist glory, will just let Ali Durrani die a horrible, slow, painful death.

Why? As a “deterrent” to other asylum-seekers.

Thinking about it like that makes me ashamed to be an Australian today.

When IA spoke to First Dog On the Moon, his comment about Sinister Mutton and the Australian Government sums it up brilliantly:

"We are governed by the worst of men."

~ First Dog On the Moon

If the Turnbull Government is merciless, what can you do?

I don’t know about you, but I cannot just let this happen. In this case, silence is consent.

As the MEAA head, Paul Murphy says on the Bring them here campaign page:

'... as journalists, writers, performers and artists, we cannot stand by and allow our fellow professionals to be treated in this way.' 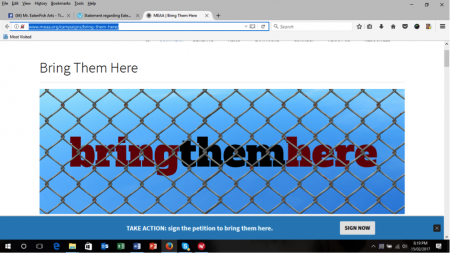 I am a 30-year veteran of the journalists’ union; so, my contribution to saving Eaten Fish is to write this story. But there’s more that I can do — and you too.

The MEAA campaign is being supported by journalists and cartoonists from around the world.

If you are a media worker, you can sign an open letter to Malcolm Turnbull and Sinister Mutton, demanding that the government bring Ali to Australia for urgent medical treatment.

'CRNI joins with IFEX, Australia’s Media, Entertainment & Arts Alliance, the International Federation of Journalists (Asia-Pacific) in once again calling upon the government of Australia to release a trio of Iranian nationals from their detention centre on Manus Island, Papua New Guinea most especially Eaten Fish, last year’s recipient of our Courage in Editorial Cartooning Award.'

Even if you’re not a professional cartoonist, you can join the online campaign to submit a picture in support of Eaten Fish. The CRNI is encouraging Twitter users to contribute simple cartoon fish to from a “virtual shoal” in the hope that this show of solidarity and support will lift Eaten Fish’s spirits. If you wish to contribute, use the hashtag #AddAFish. You should also be sure to copy in the Australian border force @DIBPAustralia.

I’m learning to draw and paint at the moment, so here’s my contribution. 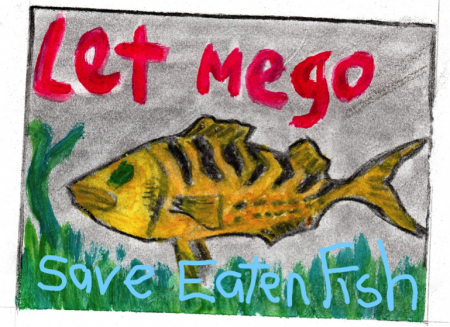 Get on your feet, take to the streets

Taking real action is more important than a symbolic protest on social media.

If you’re in Melbourne then you should join the rally to Save Eaten Fish at 2pm Saturday (tomorrow) at the State Library in Swanson Street.

The protest is organised by the Refugee Action Collective and they have compiled the latest information here. There is no excuse for not taking action. 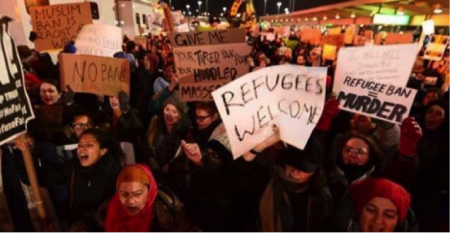 The government of Malcolm Turnbull has a black heart and its name is Sinister Mutton. Apparently, he hates this picture, so I don’t think we should be sharing it.

#qt who's got the lights turned off @PeterDutton_MP? #auspol pic.twitter.com/nS8z8ohQZM

Cartoonists use #AddAFish to support a detained refugee artist on hunger strike https://t.co/AYSQ29D7K9 via @mashable