Dutton survives — thanks to his own vote

Home Affairs Minister Peter Dutton yesterday voted to save his own job after a Senate Committee found he had misled parliament over the visas for Au Pair Affair. Political editor Dr Martin Hirst reports on a remarkably narrow escape.

IT WAS a very close vote on a motion to suspend standing orders in the House of Representatives on Thursday morning. Greens MP for Melbourne, Adam Bandt moved the motion so that the House could debate a no confidence motion in Home Affairs Minister Peter Dutton.

Labor Senator Louise Pratt, who chaired the Senate Committee investigating the Au Pair Affair, told Independent Australia she’s not disappointed about the vote and that the motion was only defeated because Peter Dutton voted to save his own job:

“I’m not disappointed at all. We know that the government is on a knife’s edge and that the only reason that they survived a vote of no confidence in Minister Dutton [yesterday] is that Minister Dutton voted for himself and that puts a lot of pressure on the Government.”

The Committee found that Minister Dutton had misled Parliament in relation to two decisions to grant incoming visitors visas to work as au pairs. One has become known as the Brisbane case and involves a former police colleague of the Minister: 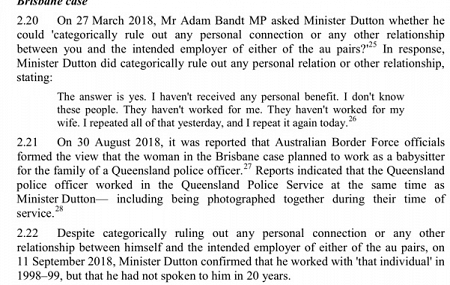 The second is referred to as the Adelaide case and involves the wealthy extended family of AFL supremo Gillon Maclachlan. In this incident, the Minister organised a visa in less than a day — and on a Sunday, too!

The numbers are so tight for the Morrison Government that the vote to suspend standing orders – and by implication to censure Dutton – lost narrowly: 68 to 67. Effectively, the Minister whose actions are in question got to decide the casting vote in his own favour.

That we have reached this point less than a month into the Morrison era is testament to how low the COALition is prepared to stoop in order to hang on to the Treasury benches.

The bar is set pretty low, but still Morrison and his band of merry pranksters was able to limbo under it, with the lanky and sour Dutton sneakily holding up one end to make it easier for the less nimble Government members to crawl under on bended knee.

There was much talk this week of one or more disaffected Liberal women crossing the floor to vote with the Greens, the crossbench and Labor to at least allow a no confidence motion to be debated.

Alas, the Government whip obviously got around and lashed everyone into shape — at least for long enough to hold the line on this issue.

Losing Dutton might be good for Australia, but it would have been a disaster for Morrison, who holds on by the thinnest of margins. His Government lives to hand jive another day.

It's good that Scott Morrison took the Fatman Scoop tweet down - he used the wrong verse! Fixed now 😘 pic.twitter.com/c1SJWrGxCw

Morrison is very glib when defending Dutton. At a lunchtime presser in the PM’s courtyard on Thursday, Morrison briefly answered a journalist’s question on Dutton by saying he didn’t believe that his Home Affairs Minister had misled Parliament and that the Senate Committee’s report was a Labor-Greens distraction.

He then turned sharply on his heel and almost ran back into the relative safety of Parliament House, leaving Education Minister Dan Tehan shuffling paper and looking sheepish at the podium.

According to Louise Pratt, the Prime Minister has “gone out of his way” to defend the Home Affairs Minister:

“Scott Morrison has gone out of his way to defend the indefensible as if to say: ‘There’s nothing to see here. There’s a lot of pressure on [him] because the life of the government depends on it.”

Senator Pratt says the Senate Committee had a lot of trouble in its dealings with Dutton’s department, which seemed to be doing everything within the letter of the law to obstruct the inquiry:

“There was a range of witnesses that we asked for that could have answered [our] questions, but instead they sent their higher officials who hadn’t come prepared to answer those questions. I got the sense that [the officials] were going to make it very hard for the Committee to extract the information.”

It seems that departmental officials were treating the whole inquiry process like it was an episode of the British sit-com,Yes, Minister.

Morrison’s defence of Dutton is a relatively low low in the history of ministers dodging a bullet for misleading Parliament. There was a tradition – going back a very long way – that Ministers would resign their portfolio if caught out in a lie or for misspeaking in the House or Senate.

Labor Senator @Louise_Pratt: "The Greens are moving a motion of no confidence in Peter Dutton, which Labor will support. I would call on the crossbench to consider the findings of our (senate) inquiry, which showed that Minister Dutton misled parliament." #auspol @SBSNews pic.twitter.com/2W5pq8y3as

Unfortunately, the COALition has abandoned principle on this matter and at every turn since 2013 Ministerial misconduct has pretty much been swept under the carpet. Those that have been forced to resign were the ones – like Stuart Robert, Susan Ley and Barnaby Joyce – who were caught red-handed.

The last 13 resignations – all of them in the last month – were because the Minister in question was in “dispute with the Prime Minister” according to a website that tracks these things.

One of those was Peter Dutton, who resigned from the Ministry following his defeat by Malcolm Turnbull in the first ballot for Liberal Party leadership. He was reinstated to the Ministry by Morrison after the second ballot a few days later.

Maybe now that’s a decision that the PM privately regrets.

It’s interesting to track ministerial resignations and in recent years they have become a good barometer of stability in government ranks. Not only have we had a revolving door on the Prime Minister’s office since 2010, we’ve also been very careless with government ministers. They have been dropping like flies for the past ten years.

In a decade between 1996 and 2007, the Howard Government lost nine ministers, all for misconduct.

Since the first Rudd Government (2007-2010), there have been 33 ministerial resignations or sackings, which accounts for more than a third of all such incidents (94) since Federation in 1901.

The first Rudd Government lost one – Joel Fitzgibbon – for improper conduct. Gillard (2010-2013) lost six. One was Rudd, the other five were Rudd backers, who resigned after Gillard’s victory in the leadership spill. The second Rudd government, which only lasted a few months, also lost six Gillard supporters for similar reasons.

The Abbott Government lost two between the 2013 election and the Turnbull challenge in 2015. Arthur Seenodonors was stood aside, but came back under Turnbull.

The second was Turnbull himself, who resigned to challenge Abbott.

The Turnbull Government lost 18 ministers — five for misconduct and another 13 who refused to continue serving in his Cabinet.

No wonder Morrison has been so keen to hold onto Dutton. If he goes, it could open the floodgates. Or maybe, it would be like rats deserting a sinking ship, or maybe more like lemmings going over the cliff.

The next round in this ongoing battle between the Senate and Peter Dutton will begin when Parliament sits again on 17 October.

Louise Pratt has given notice of a motion to require the Minister representing Dutton in the Senate to provide an explanation.

We can only assume Morrison and Dutton will dodge and weave again, looking to prolong the fag end of the ATM (Abbott - Turnbull - Morrison) Government.