Did ex-Victorian Liberal MP, Donna Bauer, who is now also a hopeful pre-selection candidate for the federal seat of Dunkley, both deliberately fabricate and plagiarise someone else’s work on Facebook as a shameless act of self-promotion?

If so, the implications are far reaching. At stake is Ms Bauer’s integrity, honesty and credibility — foremost. In addition, it necessarily further damages the Victorian Liberal Party brand and reputation which is in turmoil after what has been described as corrupt and illegal behaviour by the now disgraced former Victorian Liberal Party state director, Damien Mantach.

Mr Mantach was recently charged with the embezzlement of around $1.5 million in election campaign funds from the Liberal Party. How can the Liberals rebuild any notion and appearance of legitimacy following its devastating 2014 election defeat when a select few of its supporters, members and ex-parliamentarians continue to cause untold damage by adopting unbefitting behaviour for self-interest purposes?

On 16 September 2015, Donna Bauer uploaded a small Facebook post, completed with a photo, to her 2000 followers. Specifically, Donna Bauer claims she witnessed a "cute" mother duck and ducklings crossing a road in Patterson Lakes, snapped a quick photo and then took the time to sit down, draft, and upload a Facebook post describing what she had seen.

It appears to be completely fabricated, however. A quick Google search of 'mother ducklings' brings up the picture and article used by Ms Bauer, which clearly belongs to a 2008 report that appears in the UK’s The Telegraph and Daily Mail newspapers.

Even more damning is that one of her followers applauded Mrs Bauer’s great photographic skills.

Follower: God u get great photos, u suc. 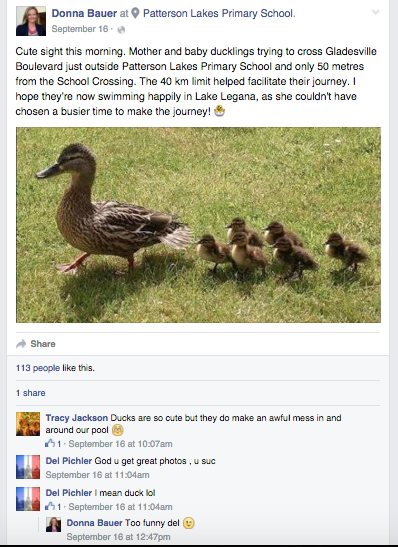 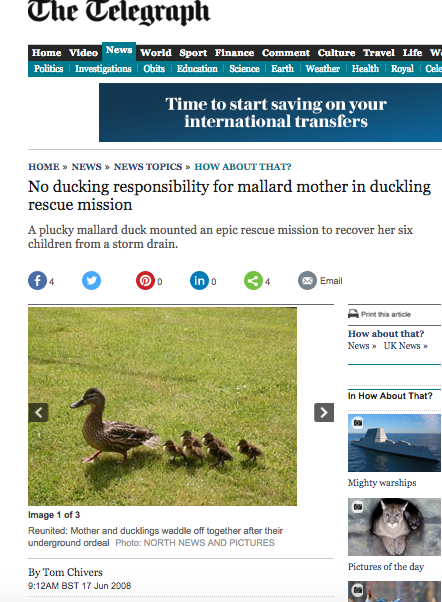 As well, numerous other followers also commented on Ms Bauer’s post. This should have been the moment when Ms Bauer credited use of the picture and potentially elements of her post to the original media outlet and author of the article to avoid deceptive and misleading conduct. The right thing to do would have been for Ms Bauer to delete the post with full knowledge that it never happened. It should have also set off personal alarm bells for Ms Bauer to question her motivation for deciding to knowingly go down this path — a path likely to further damage the Liberal Party’s reputation and her own.

However, this is not an isolated incident. Specifically, examples of similar dishonest behaviour also emerged elsewhere on social media suggesting a pattern of deliberate misleading conduct and behaviour. The most glaring being around seven months after she lost the seat of Carrum.

Ms Bauer continued to assert she was a:

'Member of the Victorian Parliament for the State Government of Victoria under ‘work’ on her Facebook page from 2010 – present.'

Under pressure from repeated calls to correct it she eventually did. This ill-fated declaration was clumsy because Ms Bauer was essentially claiming to be part of the newly formed Daniel Andrews Labor Government — she is a Liberal Member. As well, there are strong grounds to argue that falsely claiming to be members of parliament is contempt of the Victorian Parliament.

Similarly, also under her Facebook ‘work’ profile, Ms Bauer claimed to work for the City of Greater Dandenong as ‘Marketing & Communications Officer 2004 – present’.

The only way to interpret this is that during her time as an MP in the Baillieu and Napthine Governments from 2010 to 2014 when she was also moonlighting or working for the City of Greater Dandenong. However, this also appears not to be true following calls to council offices.

These examples cannot be passed off as mistakes or oversights. Ms Bauer implicitly knows the ethical and legal issues and ramifications of brazenly claiming as your own, someone else’s intellectual property or work. As well, we all know when it is time to amend key information on our social media apps and what we should and should not post. Ms Bauer’s actions were not silly mistakes or oversights.

Ms Bauer has and continues to be a prominent social media participant and identity and maneuvers and deploys large volumes of information on Facebook and Twitter from multiple accounts daily.

Many people might think her post is innocuous or harmless and not deserving of this level of scrutiny but the opposite is true. Social media is now accepted globally as a fierce domain in which political campaigns and careers are won and lost. Ms Bauer understands this and has herself incontrovertibly targeted people on social media.

Moreover, social media is working to expose and hold people to account when they act dishonestly by attempting to leverage social, economic and political gain and credibility based on deception. It is a space where ego and its pursuit of self-image by maintaining a self-brand become distorted where lies are effortlessly transformed into the truth — a platform where dishonesty becomes the new truth, where lies demand lies that are purposefully designed to feed the idea of self-importance.

Dr Wendy L Patrick’s 2015 article on the plight of wellness warrior Belle Gibson might provide a glimpse to Ms Bauer’s possible motivations. In her commentary on Ms Gibson, Patrick points to the idea that we,

‘ ... love heart-warming stories ... [that can work to] create emotional blinders that cause us to miss, misinterpret, or discount red flags.’

Perhaps it also reveals psychological dimensions and stresses seldom spoken about or recognised that intensify when people move from public to normal life — where ego, desire and popularity become intractable forces that must be sustained at any cost by exploiting family, friends, community and health issues.

Toma and Hancock's research into Facebook, suggests it holds as a useful instrument in individuals’ efforts to preserve self-worth and self-integrity. They argue that,

‘individuals seek psychological coherence, manifested as a desire to be perceived by others in a way that is aligned with self-perceptions.'

In this sense, Ms Bauer’s Facebook duck post can be considered a calculated scheme of deception and a strategy of manipulation that sustains her idealised self as a prominent community identity.

Shalvi, Handgraaf and De Dreu in Ethical Manoeuvring: Why People Avoid Both Major and Minor Lies, point out that people will consciously balance the potential for gain that will be generated from lies against the likelihood of getting caught.

As well, when caught, people will invariably seek to tactically ‘justify morally bad actions like lying’ by:

Nonetheless, lies are costly and when uncovered, the dogma of our moral character and status is discovered for what it really is. In the end, there was no rightful justification for Ms Bauer to post the duck story or to manufacture the impression on social media that she was still a member of parliament and worked for the City of Dandenong. We constantly teach our kids not to lie and get incredibly frustrated when they do.

To this end, Ms Bauer’s post necessarily raises serious questions and concerns about the credibility, truth and honesty of her past and present Facebook posts and tweets and critically, her moral and ethical character to serve the public as a politician in the future. Logically, it also raises question as to whether or not her term in the Victorian Parliament was fitting of the behaviour that exemplifies the values the public expect and codes of conduct demand.

Does her post constitute plagiarism and breaching copyright law together with an act of deception to her thousands of followers? The flow-on effects are tremendous for such a small post. For example, how truthful was her submission to the 'Joint Standing Committee on Electoral Matters: Inquiry into campaigning at polling places', in which she claimed alleged union intimidation.

Does the Victorian Liberal Party’s most recent 'Good Government for Victoria' report, which she helped draft, now lack credibility?

This is remarkably paradoxical given the report was designed to to re-invigorate the party towards an existential moment of truth following its defeat and ousting from government in the 2014 Victorian election, after only one term. Arguably, her actions only serve to drag down the Liberal Party struggling to regroup ideologically, tactically and spiritually. How does this bode for her new public relations business?

Subsequently, what appears to be blatant deceitfulness, not to mention illegal conduct, will undoubtedly cast a shadow over many areas and organisations with which Ms Bauer has been involved. These are all important questions that need answering because she is seeking pre-selection to become a federal member of parliament — in which trust, honesty and integrity are pre-requisites. This has all come about because of her decision to sit down, draft and then upload the duck Facebook post that clearly comes from a six-year-old article written and published by two prominent media outlets.

Again, she might seek to apologise to the original author and organisation seeking retrospective permission to use the picture. Yet all of these get-out-of-jail cards will invariably fall short as excuses for someone being caught out by their own omissions. The truth is undeniable — when you view her original post, she claims that she alone witnessed it, those were the ducks crossing the road in Patterson Lakes and that she took the picture.Her interactions with her followers substantiate this.

She and the most strident of her supporters might also claim her work in the community should be looked at foremost and that it only amounts to a silly mistake. However, at the time, it was arguably deliberate and simply shrinking the incident to a small mistake is unacceptable.

At the end of the day, she simply should not have done it. Ms Bauer’s post cannot be reversed or explained away. All politicians, past and present, or people who put themselves forward as community identities are subject to intense and increased scrutiny by the public. We all accept this to be true no matter who it is. This is particularly true in federal elections.

It is important that we ensure our federal candidates mirror and reflect the kind of values we believe in.