As a crisis and scandal ridden Liberal Party struggles to put our fires in so many different areas, speculation swirls over the future of Dunkley "Duckgate" duckie deceiver, Donna Bauer.

Following Duckgate, speculation has intensifyied in the Liberal Party surrounding the suitability of Ms Bauer as a pre-selection candidate for the South-East Victorian seat of Dunkley.

Party insiders are coming forward pointing to other actions by Ms Bauer they say are causing unnecessary and additional damage to an already struggling Liberal Party brand and casting further doubt on her suitability to replace long standing, but soon to be retiring, Federal Member for Dunkley and former Small Business Minister, Bruce Billson — known locally for his evangelical style.

Questions around Ms Bauer’s suitability come at a time when the Liberal Party of Australia, including its Victorian Division, is being damaged by the conduct and behaviour of its own members at the federal and state levels. We have been witness to the failed prime ministership of Tony Abbott in 2015 after less than two years in office, the "Choppergate" saga involving former Speaker Bronwyn Bishop, the cigar smoking episode involving Joe Hockey and Mathias Corman, Joe Hockey’s comments that poor people don’t drive cars (or don’t drive them very far) and, most recently, the departure of two Turnbull Government front bench ministers — Mal Brough and Jamie Briggs, along with Immigration Minister Peter Dutton’s SMS text message describing a female journalist as a 'mad fucking witch'. Mr Brough is currently under investigation by the Australian Federal Police, Jamie Briggs’ departure comes on the back of inappropriate behaviour and conduct towards a female public service employee and Peter Dutton’s text message follows his earlier faux pas about climate change and Pacific Island nations.

According to The Age political reporter, Heath Aston:

And given Peter Dutton’s conduct, one wonders whether that minister should also lose his portfolio.

Last year, the Liberal Party commissioned a report into the reasons for Napthine’s failure to secure a second term — Good Government for Victoria.

The report found a Party out of touch with young people, people in trades and small business, young parents and women, and a widely held view that the Liberal Party of Australia are 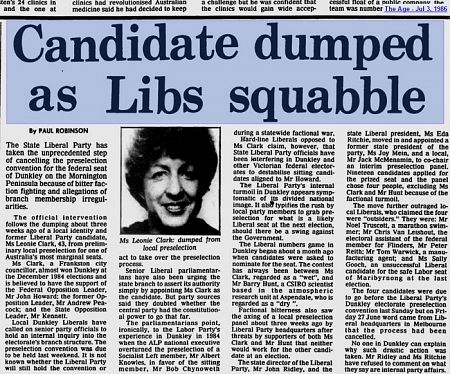 This “I don’t care about rules” approach would appear to makes a mockery of an agreed Liberal strategy to promote the Party as being one of fairness and progression. It is also behaviour that threatens to bring on a repeat of a bitter pre-selection battle fought out over the same seat some 30 years earlier.

In an article in The Age in 1986, reporter Paul Robinson documents the unprecedented step taken by the Liberal Party to cancel the ‘pre-selection convention’ for the Federal seat of Dunkley because of bitter, power driven factional party infighting.

According to Robinson, it was seen as an easy way to grab power via a supposedly safe Liberal seat and

'... typifies the rush by local party members to grab pre-selection…'

According to sources close to Ms Bauer, her belief that she is in the "box seat" allegedly pivots on her expectation that because the Liberal Party has, in principle, committed to promote more women, she is a "shoe in" and therefore can "snub the rules".

Currently plaguing Ms Bauer and likely to impact her pre-selection prospects is the “Duckgate” controversy.

An article published on this website by this writer shows Ms Bauer deliberately engaged in dishonest and misleading conduct via one of her Facebook posts. ‘Duck Gate’ also highlighted other possible instances of misleading information on Ms Bauer’s Facebook accounts which – perhaps tellingly – have now been all but removed from her social media accounts. 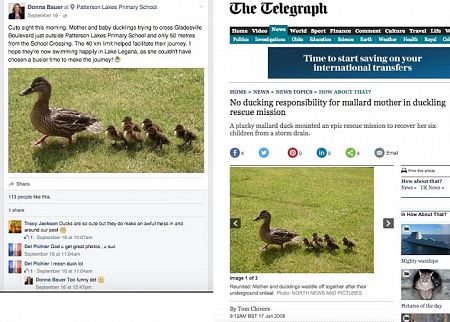 But perhaps most damaging for Ms Bauer is her apparent blatant disregard for – and breach of – Liberal party pre-selection rules. In an article in the Frankston Leader on 7 December 2015 Ms Bauer is attributed with saying that she intends to seek pre-selection for the seat of Dunkley.

'Party members are not permitted to make, or cause to be made, public statements regarding pre-selections....this includes briefing a journalist...the rule applies even if nominations have not yet been called for or closed.'

It is believed that an internal Liberal Party investigation may now be conducted given the very public nature of Ms Bauer’s alleged breaches.

In 2010, Ms Bauer was accused by Brian Tee, then State Upper House member for the South Eastern Metropolitan Region of Victoria, of "political corruption" during her time as Kingston City Council deputy mayor and South Ward councillor. The allegations concerned decisions taken by councillors, including Ms Bauer, in connection with Green Wedge Land. The conduct of Ms Bauer and others was referred to the Ombudsman for investigation.

Finally, as a witness in the Joint Standing Committee on Electoral Matters in 2015, Ms Bauer made some rather questionable written and oral submissions.

She claimed indisputable evidence of bullying, including

"... distressing incidents of ... attacks .... and the use of deliberate tactics by my opponents to denigrate and humiliate me due to my battle with cancer."

However, when pressed by the Committee, Ms Bauer conceded her evidence was just "opinion" and "interpretation" from reports and conversations she "overheard".

In a court of law, that evidence would surely be dismissed outright as hearsay evidence. And from the Committee’s own line of questioning and then Ms Bauer’s very own concessions, her evidence was, at best, unreliable at best and, at worst, misleading and mischievous.

As the Liberal Party edges towards a pre-selection process for the seat of Dunkley at the 2016 Federal election, are we going to see a repeat of pre-selection shenanigans that took place more than 30 years ago?

The Liberal Party brand has suffered a lot. The people of Dunkley need a representative who is "like them".  However, Donna Bauer has Duckgate, the 2010 allegations of political corruption, potential breaches of Liberal Party pre-selection rules and the questionable evidence presented to the Joint Standing Committee on Electoral Matters.

It will certainly be interesting to watch how the Liberal Party navigates and steers the Dunkley pre-selection process. Insiders say this will be a real stress test of the Liberal Party’s governance and ethics framework. If the Liberal Party is ready to realise a new progressive public brand, the Liberal Party must demand a higher standard of political representation and moral conviction from the people it seeks to put forward as candidates. And following the critical governance failures exposed by the conduct of former disgraced state director, Damien Mantach, the stakes could not be higher.