IN DECEMBER 2012, the developer Meriton wanted approval from Marrickville Council for a 20-storey project, Lewisham Towers. It was going to be tricky. Twenty storeys was double the site’s approved ten-storey height limit.

So Meriton offered the council $5 million for approval. The lone councillor who foiled the deal – by publicising it – was dragged through over a year of disciplinary proceedings before being cleared.

Meriton’s offer was completely legal. It was part of a voluntary planning agreement (VPA).

A VPA is an agreement between a developer and a planning authority (for example, a local council), under which the developer agrees to provide or fund specified public infrastructure.

It seems appropriate that a developer pay for public infrastructure required to service their development. But a VPA is different from a conventional Section 94 contribution, which allows just that. VPA funds can be used for purposes unconnected to the development in question. They can even be used for recurrent expenditure for public amenities.

According to a 2012 ICAC report, these factors give VPAs 'the potential to distort planning decisions'.

With most NSW councils facing infrastructure funding problems, [there's] an opportunity for a developer to make their non-compliant or controversial development more acceptable by proposing a generous VPA ... The perception could arise that a developer bribed a council to facilitate a favourable decision.

However, an incident in early 2014 raises the question of whether VPAs could be distorting council actions well beyond the original approval. 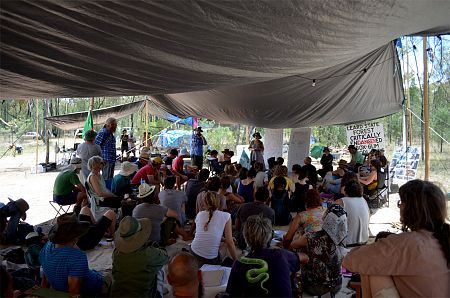 In January 2014, Boggabri Coal, a subsidiary of Japan-based Idemitsu Kosan was in conflict with a group of nonviolent protestors camped near Leard State Forest, NSW.

Over the 17 months of its life, the camp had won support from the surrounding community and locals regularly donated supplies like firewood, water and food. While some of the protestors engaged in "locking on", most gave police no justification for arresting them. (Locking-on to gates or machinery is a deliberate act of nonviolent civil disobedience to draw media attention to an issue.) The growing community protest was attracting public attention and becoming bolder in its media stunts.  Its activites focused on the two coal companies that threaten Leard State Forest: Whitehaven Coal  and Boggabri Coal.

Boggabri Coal asked Narrabri Shire Council to remove the protestors. Eleven days later, the council voted to evict the protestors from the campsite that had been manned peacefully for a year-and-a-half.

In a letter to the Leader, he said:

'In my 31 years as councillor, I have not seen any attempt by the Narrabri council to circumvent normal council procedure to achieve a political result as the actions that have surfaced in the last 48 hours.'

Here’s what happened. On 10 January 2014, Ken McLaren, Boggabri Coal’s general manager of operations, complained in writing to Diane Hood, General Manager of Narrabri Shire Council about the presence of the community protest camp:

'We trust that we can work with Council in this matter with a view to official discontinuation of the protestors' presence.'

Two business days later (14 January), the NSW Forestry Corporation suddenly closed Leard State Forest to the public. Police arrived at the camp at 8:30am and gave protestors 12 hours to pack up and leave. Anyone remaining would be liable for removal, prosecution and fines.

Protestors quickly sought legal advice and confirmed that the campsite was actually outside the official forest boundary, on council-owned road reserve. When police were informed, they agreed not to evict the protestors. The camp survived another day. 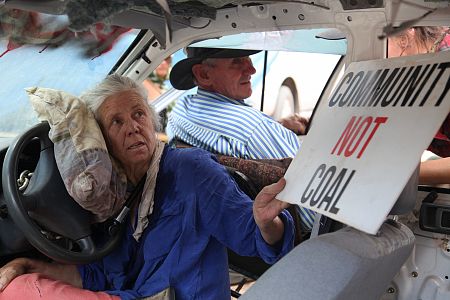 The reason given for the forest closures (high fire danger) was widely questioned. There was no total fire ban and a check of the Forestry Corporation’s website on 14 January revealed the only other state forest closed to the public was the Jack State Forest — home to a similar community camp opposing Santos' activities in the Pilliga.

Additionally, the closure did not apply to mine employees, who continued to enter and operate heavy machinery in both forests. Protestors witnessed flaring (burning off waste gas) within Jack State Forest. Large trucks with the words "combustible liquid" written on the side were seen driving into Leard. Forestry Corporation’s claims of RFS support for the closures angered local RFS volunteers, who claimed flaring and heavy machinery use posed more of a fire danger than the camp.

The campers saw the closure as a politically-motivated attempt to quash the protest.

The day of the camp’s reprieve, Diane Hood had a discussion with Gelina Talbot, Commander of Barwon LAC — the local police.

'... assistance from Narrabri Shire Council in respect of a number of persons who I believe are undertaking unauthorised camping and erecting unauthorised structures on Reserve Land.'

She describes her concerns as 'the same risks' that the Forestry Corporation used to justify the forest closure.

'.... request for RFS advice on closing road reserves to camping during the high fire danger periods.'

On learning of Hood’s request, Jim Casey, then state secretary of the State Fire Brigade Employees Union, called the closure of the state forests 'politically-motivated' and suggested 'Council is using the RFS in the same manner'.

A week after his initial letter, Ken McLaren of Boggabri Coal wrote again to Hood, finishing with:

'... we urge Council to investigate every possible avenue available to the authorities to enforce the removal from the area of these camps and persons.'

Hood compiled a business paper for an extraordinary meeting of Narrabri Shire Council, held on 21 January, in which she included all the letters plus an outline of possible legal avenues for the Council to evict the camp.

At the meeting, a majority of councillors voted to instruct Hood to

'... commence action under relevant Acts and Regulations, to issue fines and/or give notice to cease camping activities on road reserves without the appropriate approvals.'

On 23 January, three councillors, Bevan O'Regan, Lloyd Finlay and John Tough, lodged a motion to rescind the 21 January decision and give time for the protestors to apply for approvals. On 28 January, the rescission motion was defeated.

Soon, eviction and impounding notices were placed on all tents and other structures in the camp, giving a deadline of 5 February for removal. The protestors complied, moving to private property several kilometres away. The move had a noticeable dampening effect on the protest's visibility and effectiveness.

For a year-and-a-half prior to Boggabri Coal's request, council had not sought action against the camp.

In the business paper for the 21 January vote, Hood acknowledged that:

'The inspection of the camp did not reveal any evidence of public nuisance [and the camp] does not appear to be obstructing or encroaching on the road.'

However, 11 days after Boggabri Coal wrote to Hood, 'with a view to official discontinuation of the protestors’ presence' and five days after they urged 'the authorities to enforce the removal of these camps and persons', the Council voted to do exactly that.

These events could be explained several ways. But it’s difficult to avoid wondering whether the $8.7 million contribution from Boggabri Coal to Narrabri Shire Council – via a 2012 VPA, according to the project approval conditions – could be a factor in the Council's actions. Not to mention the continuing 7.5c per tonne of coal extracted and the annual 25,000 tonnes of free gravel.

It’s not hard to see how it could happen.

To put the total VPA contribution in context, the combined political donations declared to the Australian Electoral Commission (AEC) in 2013/14 by the NSW Liberals, Nationals, Labor and Greens was $5,042,022.

It’s clear that many political donations slip under the radar, but at least some of them must be declared openly on the AEC register, which is easily searchable on the Democracy For Sale website. Of course, such semi-transparency doesn’t stop donations from influencing political decisions, but public knowledge of who’s paid whom is essential to limiting corruption.

VPA contributions aren’t technically political donations — they fund councils, not specific councillors or parties. So they’re not listed on political donations registers. They’re also not subject to councillors’ “Declarations of Pecuniary or Non-Pecuniary Interests” — even though the payment per tonne of coal gives Narrabri Council a financial interest in the continuing productivity of the mine.

Councils are required to give public notice of, as well as a 28 day inspection period for, proposed VPAs. After that, they must include a progress report on VPAs in each council annual report. However, once the initial 28 days has passed, unless you’re willing to trawl through every council annual report, or submit potentially costly GIPA requests, it’s very easy not to know the scale or source of VPA contributions.

We’ll probably never know why Narrabri Council really decided to evict the protestors. But from a citizen’s eye view, VPAs appear to be a poorly understood source of money for political influence — an opaque but legal avenue for companies to contribute to council coffers and consequently “distort” decision-making in favour of the company, at the expense of the public interest.

Which raises another question. How many NSW councils does this affect?

Thanks @Thom_Mitchell great article on the battle to save Leard Forest from $WHC Whitehaven #coal #Leardblockade https://t.co/pKAneeuezw