Democratic renewal, vested interests and the subversion of the public interest?

The problem of vested interests and their corruption of public debate must be addressed. It is urgent if we are to have democratic renewal, restore some faith in our public institutions and develop sound public policies. John Menadue reports.

THERE ARE many key public issues that we must address such as climate change, growing inequality, tax avoidance, budget repair, an ageing population, lifting our productivity and our treatment of asylum seekers.

But our capacity to address these and other important issues is becoming very difficult because of the power of vested interests with their lobbying power to influence governments in a quite disproportionate way.

Lobbying has grown dramatically in recent years, particularly in Canberra. It now represents a growing and serious corruption of good governance and the development of sound public policy.

In referring to the so-called public debate on climate change, Professor Ross Garnaut highlighted the "diabolical problem" that vested interests brought to bear.

Ken Henry, a former secretary of Treasury, says he

"… can't remember a time in the last 25 years when the quality of public policy debate has been as bad as it is right now.”

He was followed as secretary of Treasury by Martin Parkinson, who has warned about "vested interests" who seek concessions from government at the expense of ordinary citizens.

The former ACCC chairman, Graeme Samuel, has cautioned that:

"A new conga line of rent-seekers is lining up to take the place of those that have fallen out of favour.”

‘Industry lobby groups have become less inhibited in pressing private interests at the expense of the wider public interest. They are ferociously resistant to reform proposals.’

The 0.01 Per Cent: The Rising Influence of Vested Interests in Australia http://t.co/O9qMm9Gk2g

These problems are widespread and growing

Some accounting firms, including three of the majors who undertake lobbying are not obliged to register. Charitable, religious and non-government organisations do not have to register. On top of these "third party" lobbyists, there are the special interests who conduct their own lobbying, such as the Minerals Council of Australia and the Australian Pharmacy Guild.

These lobbyists encompass a range of interests including mining, clubs, hospitals, private health funds, business and hotels that have all successfully challenged government policy and the public interest. Just think what the Minerals Council of Australia did to subvert public discussion on the Mining Super Profits Tax and the activities of Clubs Australia to thwart gambling reform, or the polluters over an Emissions Trading Scheme and the Carbon Tax.

I estimate there are over 1000 lobbyists, part time and full time and of all shapes and sizes operating in Canberra. Secret lobbying is pervasive and insidious. It must be curbed and made transparent.

With journalism under-resourced, the media depends increasingly on the propaganda and promotion put into the public arena by these vested interests. The Australian Centre for Independent Journalism at UTS found in a survey of major metropolitan newspapers published in Australia in 2010 that 55 per cent of content was driven by public relations handouts and 24 per cent of the content of those metropolitan newspapers had no significant journalistic input whatsoever, relying heavily on public relations handouts.

Many of the so-called economic experts we read, hear and see on our media are in the employment of the banks and accounting firms with their own self-interested agendas.

With over 60 per cent of metropolitan newspaper circulations in Australia, News Ltd is a major obstacle to informed debate on key public issues like climate change and our role in Iraq. Essential Media found that the ABC and SBS were the most trusted media in Australia. Not surprisingly the least trusted were the Murdoch papers; The Australian, Herald Sun, The Telegraph and the Courier Mail. 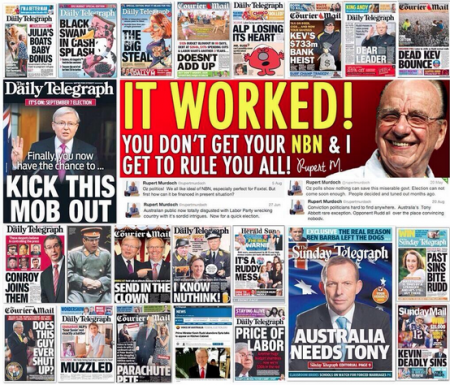 The wealthy private schools with their lobbying and political clout are obstacles to needs based funding which is necessary for both equity and efficiency reasons.

Much of the policy skills in Canberra departments have been downgraded and "policy" work is contracted out to accounting and consultancy firms. Policy work within the government is now undertaken more in specialist organisations such as the Productivity Commission rather than in the departments. Departmental policy capability has been seriously eroded. That is the real story behind the problems of the pink batts scheme.

Inexperienced and young ministerial staffers are much more likely to listen to vested interests. Recently we had a staffer in the heath portfolio coming from a lobbying firm.

What can be done to assert the public interest against these powerful vested interests?

Federal lobbyists have to be registered with the department of Prime Minister and Cabinet, but this is inadequate. They should also be obliged to promptly, publicly and accurately disclose the discussions and meetings they have had with ministers, shadow ministers and senior public servants. That same rule should apply to vested interests like the Minerals Council of Australia that lobbies directly on its own behalf.

A clear lesson to be learnt from the subversion of the public interest by the AMC is that giving in to rent seekers doesn’t appease them. It just makes them and others much bolder. The government is seen as a craven "patsy".

All proposals by special interest groups should be accompanied by a public interest impact statement prepared by an independent and professional body. That statement should be made public. This public impact statement would be attached to representations from the vested interest group. Many of the major private consulting firms should be excluded from this process as many of them have shown themselves to be compromised in the interests of their clients.

Tax benefits for "think tanks" like the Institute of Public Affairs which are secretly funded and act as fronts for vested interests should be denied. [Editor's note: See Sandi Keane's article 'The IPA and Waubra Foundation's charitable tax status rorts'.]

Departments such as Health which are so influenced by special interests should have different governance arrangements. The traditional minister/department model in Health is a happy hunting ground for vested interests that significantly influence outcomes in health. The Reserve Bank, composed of independent and professional persons, has shown the benefit of such governance arrangements in keeping vested interests at bay and promoting an informed public debate. We need such an arrangement in the health field particularly.

No minister or senior official should work with a vested interest group that they have been associated with for at least five years after retirement or resignation.

Adequate funding of the Australian Broadcasting Commission to assert the public interest and promote public debate is now more important than ever. The ABC, despite its shortcomings is still the most trusted public institution in the country.

Abbott fears #qanda scrutiny. That's why he's boycotting the program. Meanwhile, most Aussies trust ABC, but not him http://t.co/iPjihFVuw7

A federal Independent Commission against Corruption and in each State is required to examine allegations of corruption.

The problem of vested interests and their corruption of public debate must be addressed. It is urgent if we are to have democratic renewal, restore some faith in our public institutions and develop sound public policies.

This article first appeared in 'John Menadue - Pearls and Irritations' and is republished with John Menadue's permission.

No, not good enough: Paying back the $5000 helicopter flight does not fix Bronwyn Bishop's problems - Michael Gordon http://t.co/4qEbhB7gZK

Prefer your news independent of vested interests? Subscribe to IA for just $5.