The Economist’s Intelligence Unit (EIU) recently published their annual ‘Democracy Index’, a comprehensive report on the state of democracy around the world. It warns that democracy is in decline after three decades of growth and of the emergence of populist “strongmen”.

Even in Australia, we cannot afford to hide behind our proud democratic record; we cannot just show up at the polls, we need to engage.

ACCORDING TO THE EIU Democracy Index, there are only 20 “full democracies” in the world — Australia and New Zealand are the only members of this exclusive club in Australasia. 14 of them are in Europe and the United States – the self-appointed defender of world democracy – is no longer regarded as a full democracy.

The Economist divides the world's nations into four groups. Beyond the full democracies, the next group is “flawed democracies”, followed by “hybrid regimes” – typically countries with pretend elections – and finally “authoritarian regimes”, where there isn't even any pretence. At the very bottom of the list is the ironically-named Democratic People's Republic of Korea — or North Korea, the fiefdom of my namesake, Kim Jong Un (no relation). 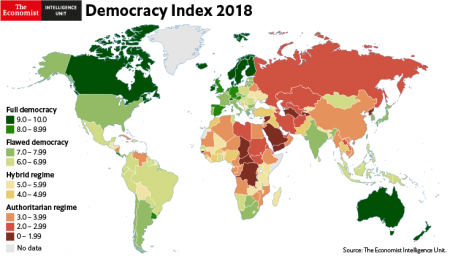 First published in 2007, the Democracy Index has waxed and waned over the years. Countries move up and down the list as dictators are removed and others take control elsewhere, new constitutions are written, others ignored. Back then, there were 28 countries considered full democracies — it peaked at 30 in 2008 and now stands at 20.

According to the EIU Democracy Index, only 4.5% of the world population lived in a full democracy in 2018. Learn more abou the current state of global democracy : https://t.co/rqyHqV6gUl #DemoIndex pic.twitter.com/G98VomNMkc

Their findings largely echo those of U.S.-based Freedom House who have their own “Political Freedom” and “Civil Liberties” indices. The (not so) catchily named V-Dem (Varieties of Democracy) – based in Sweden, but with researchers spanning the globe – recently released their own annual report, echoing similar sentiments shrouded in the secret language of academia. V-dem's data gathering is extensive, varied and unique and their rankings go back to the French Revolution, although I don't think Voltaire would have cared much.

The common thread of all three reports is how authoritarian regimes are on the rise, as evidenced most recently by the election of Jair Bolsonaro as president of Brazil, the world's fifth most populous country. Bolsonaro is against secularism, opposes gay marriage, deplores homosexuality, is an outspoken racist and climate change denier, and suggests torture is a legitimate practice.

He fits in neatly with the likes of The Philippines' Rodrigo Duterte, Turkey's Recep Erdogan, Hungary's Viktor Orban and the U.S.'s Donald Trump — all democratically-elected leaders with limited regard (and understanding in Trump's case) of the institutions that they have been elected to lead.

We can only hope that the democratic checks and balances in the U.S. Constitution are enough to stop Trump before he declares himself emperor, but in the case of Brazil, Philippines, Hungary and Turkey, the democratic pillars are on much less solid footings.

The democratic recession may not be over, but it has at least stalled. My write-up of the 11th edition of the EIU's Democracy Index #DemoIndex https://t.co/fuJEAL6oCF

With the exception of Turkey, the aforementioned countries all have free elections, defined by everyone being free to vote and anyone can stand for elections without fear or favour, elections are held regularly, and are fairly-monitored secret ballots.

Like most of the countries in the “flawed” group, they all have high scores in this category. Even some of the countries that are classified as “hybrid democracies” often have fair and sound electoral processes.

Although many countries can do much better, the polling booth is generally not where democracy falters.

This category is measuring how, once elected, executive government is free and able to govern based on the authority vested in it by the elected body (such as Parliament and Congress) with reasonable transparency and not unduly influenced by other institutions (like church or military) or by corruption.

It also includes an assessment of the trust that voters have in political parties and the government based on surveys, where possible. Needless to say, the trust is in decline almost everywhere, although that may not be a bad thing for the long-term survival of democracy, as it also fuels participation.

This is the only measure that shows a sustained upward trend. Despite the ultimate disappointments of the “Arab Spring”, it demonstrated that when given hope, people in dysfunctional countries rose up and made their voices heard. History has shown us that this is often how change eventually happens: the first revolution fails after a fiery start, the embers keep on burning and people power eventually prevails.

Participation is measured on factors such as voter attendance (hence the U.S. scores low), membership in political parties, and preparedness to partake in political rallies and demonstrations. France, a democracy laggard in other respects, scores high here, even before “des gilets jaunes”.

‘In a context of disillusionment with democracy in practice and in principle, and of declining civil liberties, the rise in political participation is remarkable. Clear disenchantment with formal democratic institutions is not preventing the population from participating in them.’

The other driver of the political participation index is the still slow but steady increase in the number of women elected. That said, we've got a long way to go when top score is measured at more than 20 per cent of representatives. It's clearly not just the Australian LNP that have yet to get that memo.

In 2018, Eastern Europe's overall score in the Democracy Index improved only marginally: it was driven by substantial improvements in the scores of Armenia, Estonia, and Macedonia and offset by the dropping scores in Russia and Georgia. https://t.co/y18YtMRgrI #DemoIndex pic.twitter.com/YN0FvD48h6

This is the area of most concern and where the cracks to democracy invariably first appear. It covers basic human rights, including the freedom of media, freedom of association, freedom from discrimination, the independence of the courts and degree of secularism.

As we have seen in Turkey over the past decade, Erdogan has used his majority to erode democratic rights by removing Parliament's control over the executive, neutered the courts and generally eroded civil rights. He has curbed press freedoms, prosecuted journalists and persecuted minorities, defined as anyone who either doesn't agree with his views or is not of the “correct” Islamic faith.

It is a similar story in Hungary, where Victor Orban, who clearly got so tired of being in opposition that when he finally became Prime Minister for the second time he had sufficient majority to make constitutional changes to prevent amendments to legislation enacted by his government, including weakening the role of the courts. The Hungarian Constitution protects freedom of speech in theory, but state-owned media and new laws introduced over the last few years have, if not completely silenced opposition voices, significantly curbed their capacity to report freely.

Australia and many of the other “full democracies” score a perfect ten in the Civil Liberties category, suggesting it is a somewhat defective measurement as no country this side of Utopia can claim to be squeaky clean on human rights.

Our treatment of refugees may technically not be deemed “undemocratic”, but they are certainly inhumane. And as the EIU report was compiled before the draconian cybersecurity legislation was approved, I'd suggest it is a score we will not maintain when the next report is published in 12 months time.

Two sides of the EIU Democracy Index 2018 spectrum: Norway is again at the top and North Korea at the bottom. Learn more about the state of democracy in our latest report: https://t.co/zv1fSiy78C #DemoIndex pic.twitter.com/X17IJ7FC8W

We should be proud of – and thankful for – being a “full democracy”. It's a privilege a majority of the world's nations don't enjoy and mostly never have. It is easy for us to forget that most countries don't have a culture of free elections, a well-functioning government, a high degree of participation in the public discourse and strong protections for civil rights.

Establishing a strong democratic political culture takes generations, but it can be quickly dismantled.

India is the world's largest democracy and does have a relatively strong political culture, maybe the most valuable legacy of British colonial rule. As does our nearest neighbour, Indonesia. Both countries have their own challenges in maintaining that status as they have elections coming up this year.

India's Prime Minister Modi has been criticised for heavy-handed tactics against a fractured opposition and corruption is on the rise in a country that, despite its economic growth, is a very long way away from according equal rights to all its poor and all its minorities. A re-elected and emboldened Modi may well go down a less democratic path.

Indonesia has come a long way since the fall of Suharto in 1998, but it remains a country divided by religious fervour and dogma, still a fair way away from a secular democracy with equal rights for all.

China, the world's most populous country – and arguably most powerful – scores a predictable zero on electoral processes and not much better on civil liberties, but relatively high on the political culture scale. The EIU attributes that to the Chinese people having little desire for a democracy — a form of government they have never experienced and thus have little reason to believe in. Many like what they've got.

In Australia, we may believe that improveme,nts in our national fortune are no further away than the next election. But that is a fallacy, as our democracy is also under threat by politicians putting their self-interest first, heavily influenced by lobbyists, special interest groups and donors, increasingly blurred lines between the legislature and the executive, and a Senate that no longer serves as a house of review, but as a chamber of obfuscation.

We cannot afford to be complacent. It is not a far stretch to think of Peter Dutton and others of his ilk as people who share not just some of the beliefs of an Erdogan, Orban or a Bolsonaro, but also their ambition.

The huge chasm of distrust between the electorate and our representatives is growing, and will only be narrowed by increased and sustained participation of engaged voters.

The US will decide, post-Mueller, whether Trump’s presidency is terminal. The UK will decide whether to tear up a half a century of European integration. And Australia faces a general election.

Kim Wingerei is a former businessman turned writer and commentator, and author of ‘Why Democracy is Broken: A Blueprint for Change’. You can follow Kim on Twitter @kwingerei or on his website, kimwingerei.com.

#eiu #democracyindex2018 Newly released EIU Democracy Index 2018.  Australia maintains its overall score from 2017, many of the Top 10 Full democracies are, except Finland which improves by 0.11 overtaking Australia to No.8.
See full white paper here (https://t.co/els5ECSfrp) pic.twitter.com/of5hJ6SEa3

Banking Royal Commission: The work has only just begun