Overlooking the real enemy: Why Dastyari is small beer

The Turnbull Government campaign against Sam Dastyari used the same tools Australian politicians have utilised for well over a century, writes John Passant.

Senator Sam Dastyari will leave the Senate in early 2018.  This, however, is a mere distraction from the main issue, the China scare campaign Turnbull and his accomplices in the bureaucracy, media and secret police are running.

Fear of the Chinese has been a major racist constant in Australian society since at least the time of the goldrushes in the 1850s. It was a major justification for the White Australia Policy, one of the first Acts passed by the new Parliament in 1901.

After Mao’s nationalist victory in 1949, the yellow peril became the red and yellow peril. I can remember Menzies and his acolytes exploiting it. Diagrams with a big red arrow and the dominoes falling all the way from Saigon to Sydney emerge from my memories.

Turnbull is using the same tactics that Labor and the Liberals or their predecessors have used for well over a century. What has changed is the rise of China as the second most powerful country on the globe, with an economy that will challenge the U.S. in the coming years for top dog imperialist status.

If China’s economic rise continues, it will eventually replace the U.S. not only as the dominant economic power but the dominant political and military one too. It took 70 or so years of U.S. capitalism growing and expanding before it became, after World War II, the major imperialist power. But even before that it had expanded in its own region. Indeed, the U.S. was built on the theft of land from Native Americans, from Mexico and from others. It invaded its neighbours too.

We can see the same pattern with China today. Tibet and the South China Sea are the two most obvious examples.

American influence spread throughout its region almost from the founding of the Republic and was well entrenched in the early 1800s, with declarations like the Monroe Doctrine in 1823, telling the Europeans that North and South America were the domain of the United States. Similarly, the One Belt, One Road Initiative is meant to entrench China as the most dominant player in its immediate region, expanding to the shores of Europe. Chinese investment in Africa is meant to both return wealth to China and to bring those countries into China’s orbit.

These initiatives might also, the Communist Party leadership hope, address an ongoing problem for Chinese capitalism — the systemic problem of overproduction. China hopes through its territorial and economic expansion to solve the capitalist crisis that is threatening in the medium term to engulf it — the overproduction of capital and goods.

How does Australia fit into all this? Australia is a capital importing nation and has been for its entire history. This just means it imports more capital investment than it exports. It also means that our economy is dependent on foreign investment for its continued development and growth.

On the other hand, China is our biggest trading partner. We sell it a lot of minerals and buy a lot of manufactured goods from it.

So where does Dastyari fit into all of this? China has become the imperialist rival to the United States. Like the U.S., it looks to win the support of other countries. Duchessing politicians in other countries is one way of doing that.

Dastyari is an obvious example. This list of his China connections is informative. The success of the Chinese strategy is obvious from the support Dastyari expressed for China’s South China Sea imperialist expansion.

Dastyari is not alone. Here is a list of the known contributions Huang Xiangmo – the man at the heart of Dastyari’s downfall – or his companies made (note that 11 of the 13 are to Liberal organisations or politicians): 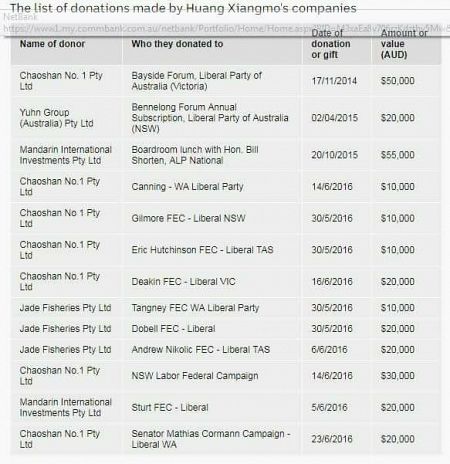 Then there are Foreign Minister Julie Bishop’s links to Chinese donors. There is also the Julie Bishop Glorious Foundation, which Bishop denied any knowledge of. And what about former Liberal Party Trade Minister Andrew Robb, the man who negotiated the China Australia Free Trade Agreement? One day before the 2017 Federal election, he began an $880,000 a year part-time consultancy job with Ye Cheng, another Chinese billionaire. Nice work if you can get it.

In November, Malcolm Turnbull was forced to deny that a $40,000 donation from a Chinese businessman bought access to him. There are many more examples of Chinese ruling class attempts to influence powerful Australian politicians. One includes the same Dastyari-linked Chinese businessman making donations to the Liberal Party at the same time as his company has an application for a redevelopment at Eastwood, which, given it is over $20 million, will be considered by a member of the Greater Sydney Commission, which the Prime Minister’s wife Lucy Turnbull heads.

The Chinaphobia Turnbull is deliberately unleashing, including newly installed Home Affairs overlord Peter Dutton going so far as to call Dastyari a "double agent",  undermines Australia’s attempts – outlined in the White Paper Foreign Policy – paper to walk both sides of the China line, while at the same time remaining firmly in the U.S. military camp.

Amid all this bash, the Chinese for their poor attempts at buying our politicans, we need to get a grip on reaity.

It is not with China we hold military exercises.

It is not China we follow mindlessly into wars, with the disasters in Afghanistan and Iraq being just the last two examples.

It is not China with a secret spy facility at Pine Gap.

No, it is, of course, the United States.

Dont miss this. "The Base: The inside story of Pine Gap's support for US wars". On Sunday or download it here... https://t.co/PP9rBo2QxL pic.twitter.com/pPjqMMeEN5

Our relationship with the U.S. gives us an umbrella for the expansion of Australian imperialism in the region.

Australia does a thousands times more to Papua New Guinea and Nauru than what Turnbull et al are complaining China is trying to do to us through the likes of Dastyari. Barnarby Joyce is even threatening New Zealand as part of this process.

PM🎩 took gifts from Chinese firm then pushed for them against security agencies' advice.

David Uren @australian:
"Turnbull was once seen as an agent of foreign influence." ‼️

This is "an offence no less" than anything done by Sam Dastyari #auspol pic.twitter.com/0w8mzFbKkO

Whilst Turnbull continues to beat the living daylights out of Sam Dastyari about his loyalty to this country, Rupert Murdoch gets a $30 million reward for ripping it off. #auspol #thedrum #abc730 #Bennelong #TheProjectTV pic.twitter.com/ba68AaslGU