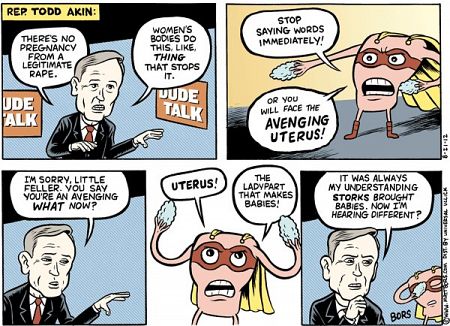 US Congressman Todd Akin is a Republican, the son of a Preacher man, and a fave of the Tea Party — but that is no excuse for saying the following in an interview on St Louis KTVI yesterday, when asked his views on abortion and rape:


"If it's a legitimate rape, the female body has ways to try to shut that whole thing down.”

Does it really, Todd? Is that how it goes?

And just how many 'ways' are there to try to shut down that 'whole thing'?

Or do you mean 'that hole thing' as in Courtney Love, without the love.

Can't bear to say the words, Mr Akin? And what exactly are those 'ways', Congressman?

It is horrifying to note that Akin is a man who has already spent 12 years as a congressman and is now running for the Senate.

Has he been to a Taliban or Al Shabaab male bonding love-in? Or to an Aussie Rules after game party?

Next he'll be demanding four male witnesses to the rape.

Was he indoctrinated in this tripe at the Covenant Theological Seminary where he strangely earned a Master of Divinity.

For heaven's sake, this dangerous and repugnant loon squats on the Congress Committee on Science, Space and Technology.

OpenCongress tells us that Akin is active in the Boy Scouts Movement.

And, wouldn't you know it, he's against same sex marriage.

This is what OC says about his stand on that issue:


Akin opposes same-sex marriage and called the 2004 decision by the Massachusetts Supreme Court an act of "judicial activism [that is] undermining the sanctity of marriage " and argued that a state-based law "seeks to usurp the legislative authority of elected representatives" and called for a U.S. constitutional amendment. A month later, apparently rethinking his position on federalism, he supported a state-level ban on same-sex marriage in Missouri.

When I read the scorching headlines about Todd Akin's offensive and derogatory remarks, I thought his name rang a loud bell.

Laura Helmuth on Slate was right on the case:


Akin’s past includes praising a militia group linked to anti-abortion extremism in the 1990s and voting against creating a sex-offender registry in 2005. Back in 1991, as a state legislator, Akin voted for an anti-marital-rape law, but only after questioning whether it might be misused “in a real messy divorce as a tool and a legal weapon to beat up on the husband,” according to a May 1 article that year in the St. Louis Post-Dispatch (via LexisNexis).

Of course, Akin is not alone in his views. Todd's views are akin to those of a couple of Australian judges, I recall.

One judge actually stated that if a woman wanted to prevent a rape, all she had to do was to keep her legs together.

And I recall another judge giving a rapist a lesser sentence because his victim was a prostitute and thus used to being penetrated — so it was considered to be less of a trauma to her.

All of this is a continuum of blaming the victim. It makes pregnant rape victims feel confused.

There is the notion that if you're not engaged in consensual sexual intercourse, then your reproductive 'juices' will shut down and protect you from becoming pregnant.

Tell that to the millions of women and girls who are raped with impunity each year, including those civilians who are the victims of military rapes.

It is frightening to note that Todd Akin also sits on the Armed Services Committee and the Sea Power and Projections Committee.

This morning Akin, is reeling from the fallout of his cruel and malicious bile — his electoral chances slip away in favour of Democrat incumbent Claire McCaskill, who has wasted no time in publishing Akin's remarks on her website.

McCaskill is going in for the kill. And with good reason, given her background. From her website:


After graduation, Claire was off to Kansas City where she first worked as a research attorney for the Court of Appeals. She then became one of the few women prosecuting criminal cases as an assistant prosecutor in the Jackson County Prosecuting Attorneys Office. Claire spent four years in the court room, trying cases involving kidnapping, sexual assault, child abuse, and homicide. She specialized in arson prosecution, becoming one of the nation's experts in this difficult area.

She served in the Missouri House of Representatives from 1983 to 1988, where she was a leader on criminal justice issues. She earned the Outstanding Legislator Award from the Missouri Association of Prosecuting Attorneys in 1987. She was also the first woman to give birth while serving as a legislator when her son Austin was born in 1987.

In 1992, Claire broke another barrier by becoming the first woman elected Jackson County prosecutor. Her office was the largest prosecutor's office in the state, handling thousands of felony cases on an annual basis. During her term, she put more criminals behind bars than any other Missouri prosecutor, established a special Domestic Violence Unit to combat domestic violence and child abuse, created one of America’s first Drug Courts, and established new and effective ways to combat the serious problem of meth in the greater Kansas City area.

President Barack Obama seized the chance to cut Akin down to size. The BBC reported:

It doesn't make sense to me either. Or to many of us, male or female. We haven't come a long way, Baby.  No doesn't mean No. It apparently means 'if' and 'maybe'.

And according to the likes of Todd Akin, you can be a little bit pregnant. If you are raped. 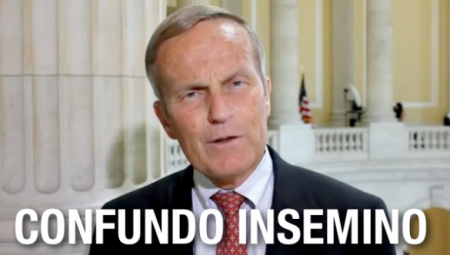