Motives behind the Coalition's intention to build a gas-fired power plant appear to be driven by ties to fossil fuel power companies, writes Richard Gillies.

THE GOVERNMENT’S recent announcement that it will build a gas-fired power plant if the private sector does not replace AGL’s Liddell coal-fired power station is possibly the strongest evidence we have ever had that the Liberal-National Coalition exists only to benefits its donors.

In the 1990s, state branches of the Coalition wholly privatised the energy industry in Victoria and South Australia in moves which increased electricity prices. Today, the Coalition wants to renationalise part of the electricity sector in a move which will increase electricity prices. In the 1990s, the cost of renewable power was greater than fossil fuel-derived power. Evidently, privatisation did not threaten the profits of companies involved in gas mining.

Today, by the Government's own admission, wind and solar are the cheapest options for power generation. Thus, private investors are favouring renewable energy over fossils fuels and the profits of companies which mine gas could be suffering as a result. It seems that when the market favours their donors, the Coalition embraces free-market economics.

Toxic emissions from burning coal can cause serious health damage to not only the environment but to all humans, including the unborn.

When the market does not favour their donors, the Coalition performs a complete ideological U-turn and endorses public ownership of power-generating infrastructure. It has been a PR masterstroke by the Liberal Party to portray their plans to use public money to build a gas-fired power plant as a threat. Even “Left-wing” media outlets such as the ABC, The Guardian and The Age are adopting this narrative.

A publicly-funded gas-fired power plant would be a wonderful outcome for Australia’s power companies. AGL, operator of the Liddell power plant which the Government intends to replace, has gas mining operations, as do several other power companies. Therefore, part of AGL’s business model has been to build power plants, extract gas and then burn that gas in those plants to produce electricity.

In the past, this has been very successful as it was a cheap way to produce electricity. It is still viable to burn gas in existing plants. However, rather than building new fossil fuel-powered plants, it is now more profitable for AGL to build wind and solar farms. By using public money to build a gas-fired power plant, the Government is providing AGL and other gas mining companies opportunities to profit from their gas mining activities without needing to invest in the expensive infrastructure required to convert that gas to power.

These opportunities would not exist without the Government’s intervention. Rather than the Government “standing up to” power companies, it is handcuffing taxpayers and giving our wallets to the power companies. No doubt Energy Minister Angus Taylor will be rewarded by the gas industry for his help in mugging Australian taxpayers when he leaves politics, as previous energy ministers have been. 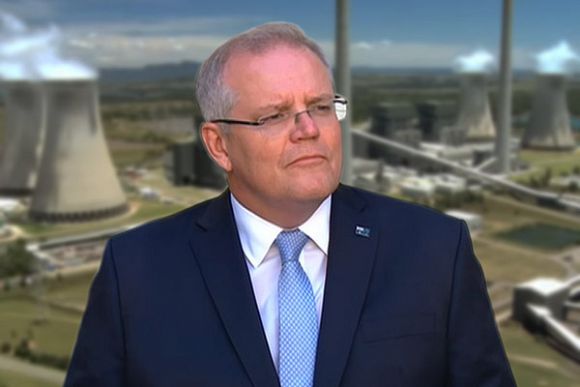 The Federal Government will continue to deny Australians the right to clean air as long as it stays partnered with the fossil fuel industry.

Taylor has been arguing that gas-derived power is necessary to stabilise power supply because of the intermittent nature of solar and wind power. It is true that a single wind farm will provide power erratically. However, there are about 100 wind farms operating in Australia distributed over an area of several million square kilometres. When a wind farm near Melbourne is not generating electricity, a farm near Sydney or Brisbane may be. The total amount of power that is generated by all of these turbines at any time is actually very reliable.

The situation is somewhat analogous to rolling dice. Imagine rolling a single die and if the result is less than three, the lights in your house do not work. This would not be a very reliable system as your lights would only work about 67% of the time. However, if you roll 100 dice and you need the average of these rolls to be three or more, your lights will work 99.85% of the time.

According to the Australian Energy Market Operator, the national energy market which operates New South Wales, the Australian Capital Territory, Queensland, South Australia, Victoria and Tasmania can already handle up to 75% renewable power. While Angus Taylor claims that gas is needed to complement the intermittent nature of renewable energy, the reality is that we are decades away from the point where intermittency of power supply caused by too much renewable energy will be a problem.

The gas-fired power plant which the Government is “threatening” to build may close before we need it — if we ever need it. If the Coalition behaved in a way that was consistent with their values, they would not intervene in the energy sector. If the Coalition abandoned their values to lower power prices, they would invest in renewable energy. The reason for the Liberals rejecting the philosophy on which their party was founded while increasing power prices, to the benefit of power companies, may be that they are receiving advice on policy from people with strong connections to the gas industry.