This overwhelming ownership (and management) of Liberal-aligned persons in Australian media has resulted in obvious bias in Australia's media content, which is hindering democracy.

Between Eastern Australia Agriculture,  Jam Land, Parakeelia, Helloworld, Foxtel, the Great Barrier Reef Foundation, Wesfarmers, Southern Strategy, Leppington Pastoral Company, countless gifts to mining companies and others, the Coalition Government has distributed billions of dollars to benefit their friends, their donors and themselves.

Labor, it seems, does not allow such corruption. When Kevin Rudd was Prime Minister, Joel Fitzgibbon held meetings between his brother, head of the health fund NIB, Mark Fitzgibbon and the Department of Defence. No agreement was made between NIB and the Government — meaning Joel Fitzgibbon’s brother did not benefit from these meetings. Despite no actual corruption occurring, Kevin Rudd still demoted Joel Fitzgibbon for this.

What about Craig Thomson?

In 2008, Labor MP Craig Thomson was accused of defrauding the Health Services Union of $28,000. Before he was even tried by a court he was suspended from the Labor Party. The media reported on this issue relentlessly, while all but a few outlets are interested in investigating the misuse by Coalition politicians of amounts tens of thousands of times larger than the $3,500 sum for which Thomson was found to have misused his credit card. 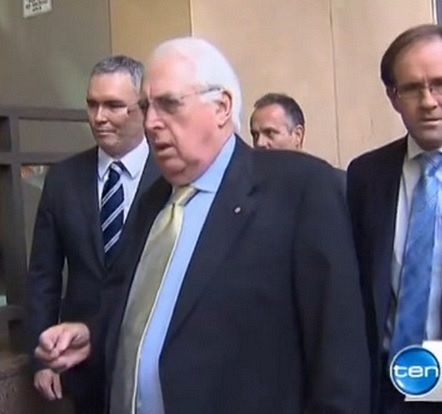 Craig Thomson walks free after getting off almost all the criminal charges against him on a 'technicality' — that is, not being guilty. Peter Wicks from Wixxyleaks reports.

What about Sam Dastyari?

In 2016, it was reported that former Labor Senator Sam Dastyari accepted a $44,000 donation from a Chinese company. Sam Dastyari later resigned. Of course, a Coalition politician bested this when a month later when, Andrew Robb, a Liberal member of Parliament, started a job paying $880,000 a year at a Chinese company. Sam Dastyari’s treatment by the Australian media was several-fold more severe than Andrew Robb’s — even from supposed "left-wing" media outlets such as the ABC and the Sydney Morning Herald. 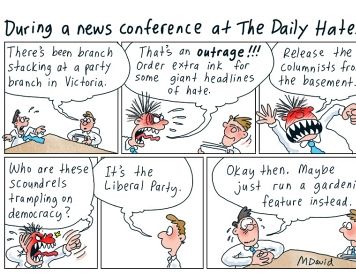 Manufacturing outrage towards Labor, apathy towards the Coalition

The number of articles in the Australian media containing the words “corruption” or “corrupt” and “federal government” or “Canberra” since Kevin Rudd first became prime minister can be searched (via open web-based application programming interface Media Cloud). Sixty-two Australian media outlets were analysed and these include nearly all of Australia’s most-read newspapers and most visited news websites. Despite the Coalition being demonstrably more corrupt and more tolerant of corruption than Labor, the media focused much more on corruption in the federal government when Labor was last in power.

Labor spent a lot of money in its attempt to stimulate the economy during the GFC. Despite this, former PM Tony Abbott inherited an improving budget which was on track to be in surplus by 2015. The Parliamentary Budget Office confirmed this. However, the budget deteriorated severely after the Coalition formed government. The  Liberal government, prior to the coronavirus pandemic, had also accrued more debt than Labor did under both Kevin Rudd and Julia Gillard. Despite the Coalition’s appalling record on managing the national budget, reporting of the national debt and deficit decreased drastically just after Tony Abbott became Prime Minister.

Modern monetary theory is a theory that proposes, among other things, that national debts are not a problem, or at least a much less significant problem than other economic theories suggests. The graph below shows how reporting on modern monetary theory has changed with time since Kevin Rudd first became Prime Minister.

Former PM Julia Gillard was punished by Australia’s media for implementing a carbon tax after saying "There will be no carbon tax under the government I lead”, five days before the 2010 Federal Election.

Prior to the 2013 Election, Tony Abbott said there would be "No cuts to education, no cuts to health, no change to pensions, no change to the GST and no cuts to the ABC or SBS". Abbott also promised, “No one’s personal tax will go up”. He reneged on all these commitments except the one relating to the GST. Tony Abbott then rebranded his lies as ‘non-core promises’. This set the standard for Coalition politicians and they have continued to lie ever since with little critique from the mainstream media.

The graph below shows how reporting on political lies and broken promises has changed with time since Kevin Rudd first became Prime Minister.

Through disproportionate reporting on government issues, the media have been instilling in the Australian electorate that lying, corruption and fiscal mismanagement are only notable when Labor are in power.

The day after Peter Slipper resigned from the Liberal National Party to become an independent, Andrew Bolt appeared on Channel 10 stating that “A lot of rubbish will now come out about Peter Slipper and it will all be to Julia Gillard’s detriment”.

What followed, among other “rubbish”, were allegations of abuse of travel entitlements from 13 years earlier, during Slipper’s time as a Coalition politician. Peter Slipper’s relevant travel habits were on the public record for more than a decade and he was later cleared of all charges.

This epitomises the allegiances of the mainstream media, who will call into question the integrity of a Coalition politician only when it can be used to damage Labor. 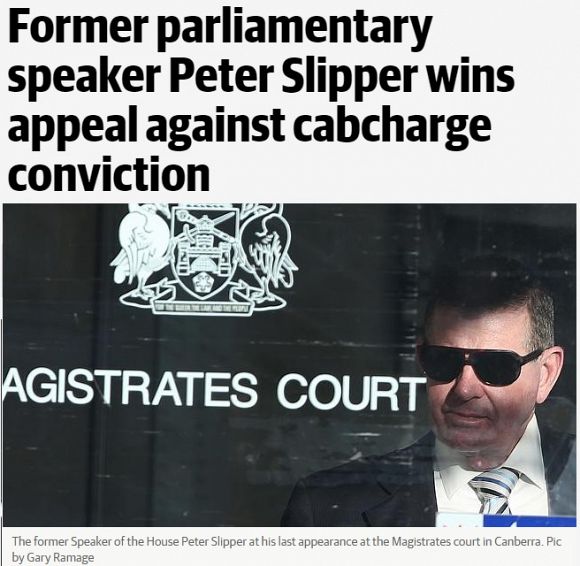 Peter Slipper wins his appeal against a conviction relating to $900 worth of cabcharge vouchers, while the Federal Police continues its investigation into Mal Brough. The Ashbygate Trust reports.

Australia’s largest media organisations stand to benefit from Coalition governments. The Coalition has an ideological commitment to ensuring that large companies pay less tax, among other favourable policies. Conversely, Labor led an inquiry into tax avoidance, which resulted in the Australian Tax Office collecting billions of dollars worth of taxes owed by large companies. Foxtel is one of Australia’s worst offenders for multinational tax avoidance.

Furthermore, the primary customers of Australian media organisations are also large companies, many of whom are also tax avoiders. Altogether, Australia’s largest media organisations and their customers, are subject to enormous financial incentives to ensure the re-election of Coalition governments regardless of the record levels of corruption now occurring.