Coalition's "clean" coal plan revealed to be an "idiotic" fantasy

IT'S PROBABLY not surprising that Coalition ministers and MPs were cradling the lump of coal brought to Question Time on Thursday by Treasurer Scott Morrison as though it were a treasure from Aladdin’s Cave. After all, their own plan for cheap and clean coal is steeped in as much fantasy as that favourite childhood tale.

Over the past few months, the Coalition has been promoting “clean coal” and supposedly modern coal plant technology as a solution for Australia’s power crisis (high prices and high emissions), all the while attacking renewables — and wind energy in particular.

It reached idiotic proportions on Thursda,y after Engie chose not to switch on its Pelican Point gas plant and supply customers, including many of its own, with power in the midst of a major heatwave (temperatures at 47.8°C in Port Augusta), forcing rolling blackouts that affected 90,000 customers.

The Coalition then chose to blame wind energy and the theatre culminated in the supply of a lump of coal to Parliament House that, as The Guardian’s Katharine Murphy pointed out, illustrated little more than their own stupidity.

“What idiocy is this?” she asked.

New blog from me. Scott Morrison brings coal to question time: what fresh idiocy is this? https://t.co/MaMNP8fbbP #auspol

The idea of “cheap coal” has already been undone by two separate assessments by Bloomberg New Energy Finance and the Melbourne Energy Institute. Both of whom pointed out that the costs of this “ultra super-critical technology” would be nearly double that of new wind or new solar.

"It's impossible to imagine a

investing in such a project."

Now, it emerges, it wouldn’t do much for emissions either. It turns out that the Government estimates of an emissions intensity of 700g/kWh were based on old estimates and have been superseded by new analysis from the Government’s own research institutions that shows emissions from USC will actually be above the current Australian average of 820g/kWh, not below.

The revelation comes from Dylan McConnell, now of the Climate and Energy College, who points out that the estimates touted by Prime Minister Malcolm Turnbull, Energy Minister Josh Frydenberg and Treasurer Scott Morrison are based on a 2010 report, since updated.

McConnell says the latest report from the CO2CRC report and analysis from a 2016 ACIL Allen report prepared for the Australian Energy Market Operator, indicates that the emissions from ultra supercritical black coal plants would be around 800grams/kWh.

This does not include so-called scope 2 and scope 3 emissions, which are indirect and fugitive emissions and which would push the emissions from this technology above the current Australian average. 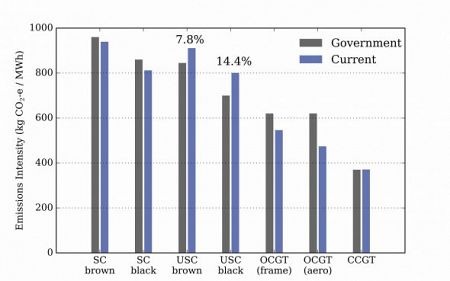 “This so-called ‘clean coal’ is no better than the average emissions intensity of the market and insignificantly better than regular coal. It defies belief that we are even talking about building one [a new coal plant] in 2017."

McConnell says this means the clean coal technology would make it impossible to meet even the Coalition’s modest target of 26-28 per cent cut in emissions by 2030, let alone deeper and longer-dated targets.

According to McConnell’s calculations, replacing all the current coal power stations with this USC technology would deliver only a 17.5 per cent cut in emissions from the electricity sector and would lock in those emissions for 30-50 years.

Nationally, the spending of more than $62 billion on these new coal plants would lock in not just much higher energy prices but also achieve just a 5 per cent cut in national emissions by 2030.

Australia’s signing on the Paris Climate Treaty obliges it – according to the Climate Change Authority and other independent analysis – to reach zero emissions well before 2050.

The Coalition’s push to build more coal – and its attacks on renewable energy targets ––have already been discredited by the fossil fuel industry itself, apart from the coal miners looking for a market for their product.

AGL repeated on Thursday that there was no way it would build new coal plants, citing the costs and its commitment to emissions reduction; and the main fossil fuel generator lobby has also conceded that such plant would be impossible to finance.

The Australian Industry Group has pointed out that such a plan would impose huge costs on consumers and manufacturers.

So why is the Coalition pushing it? Judging by its decision to bring a lump of coal to Parliament House and promote it as the answer to climate change, energy prices and energy security, it is possibly because it has completely lost the plot.

Its antics have appalled observers, climate experts and political rivals, particularly as millions of people suffer from a heatwave in the midst of a summer setting record breaking temperatures — all surely brought about by climate change and the burning of fossil fuels.

And Morrison’s embrace of a lump of coal has set up a storm of protest on Twitter, for instance check the following live feed from Twitter:

Tweets about lump of coal

“Instead of focusing on fantasies and bringing big lumps of coal into Question Time yesterday, which the Treasurer bizarrely did, they should focus on the sort of energy policy that big energy users, the electricity industry, the Energy Markets Commission, the Chief Scientist and so on are recommending that they look at introducing, and that is an emissions intensity scheme."

(Well, that’s not quite true, as Finkel was neutral on it and further analysis of the AEMC numbers undermined the case for the EIS, but underpinned the case for a high renewables target.)

This article was originally published yesterday in RenewEconomy and has been republished with permission. You can follow Giles Parkinson on Twitter @GilesParkinson.

No, @KellyODwyer doesn't want that lump of coal anywhere near her unborn child thanks. @ellinghausen picture. pic.twitter.com/A1MIHGay1J

Don't get fooled by COAL-ition claptrap. Subscribe to IA for just $5.