Every month there is more evidence that Australia’s local economy is deteriorating — this month it's wage rises, as Alan Austin reports.

AUSTRALIA'S WAGE EARNERS continue to be dudded by the Coalition Government and big business, as their share of the nation’s colossal income steadily declines. Meanwhile, export values, corporate profits and executive salaries and perks continue to surge.

The average wage rise over the full year to the end of September was just 2.23%. That’s according to the wages data for the September quarter recently released by the Australian Bureau of Statistics (ABS). With inflation currently running at 1.67%, this represents a real wage increase of a puny 0.56% over the year to September. The population the ABS monitors includes high-income salary earners who we know are reaping huge wage rises. Thus we can be sure many low-income earners – probably the majority – are experiencing real wage reductions.

The green chart below shows wage rises over the 22 years for which the ABS has provided data. Average growth was 3.56% from 1998 to 2013. Then came the current Coalition regime with its focus on serving first and foremost the top end and, particularly, foreign corporations. Average wage growth for the last six years, to September, is just 2.20%. 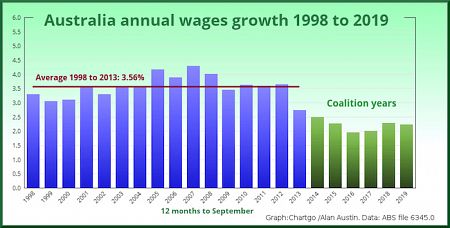 In the 22 years for which we have data, there have only been six years with growth below 2.5%. They are the last six years. The slight uptick in 2018 has not continued. Wage growth in 2019 has been well below last year’s, and is currently the third lowest on record. The only lower years were 2016 and 2017.

Relative to comparable economies, Australia’s wages growth is the worst it has ever been. After allowing for inflation, the average wage rises for the 33 comparable economies at tradingeconomics.com is currently 3.12%. Australia now ranks 27th out of those 33 countries. (See blue chart below.) 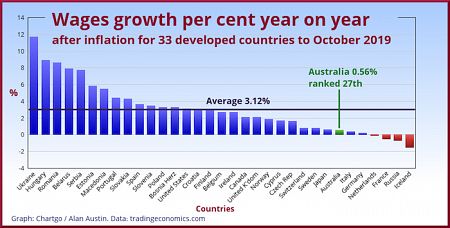 There is no sign of any relief for workers under the current economic settings. The last time IA looked at wages, in August, Australia’s real wage rise was 0.82% and its global ranking was 23rd among the same group of 33 economies. So both the rate of wage rises and international ranking have slumped further in the last quarter.

Some sectors have been affected much worse than others. Of the 18 industries that the ABS identifies, workers in retail and in construction have gone backwards the most over the last three years. This will not surprise regular IA readers who are aware of the severe recession in those sectors since the Coalition’s policies have taken effect. Real wages have also declined over that period in mining, scientific and technical services, rental and real estate, and administrative services.

Sectors with the best pay outcomes have been health care and education, where state governments are the dominant employers. Even these have seen average real wage rises of just 0.86% and 0.59% per year, respectively, over the last three years.

The Coalition and its spruikers in the mainstream media and corporate sector want voters to believe things are tough in Australia because of “global headwinds”. The opposite is the case. This is why these wage outcomes – and the other collapsing economic indicators in Australia’s domestic economy over the last few years – are so appalling.

Trading economics shows the quarter-on-quarter growth in gross domestic product (GDP) for all 36 OECD member countries. These are updated every three months. We have the results for the September quarter for 30 of those countries already. Of these, only Iceland has recorded a negative quarter. That contrasts with three countries which went backwards in the June quarter — Germany, Mexico and the UK. All three of those economies have recovered well in the September quarter.

The average annual GDP growth is a healthy and sustainable 1.98% for those 30 countries, which is significantly higher than the 1.85% for the June quarter.

We can look also at other indicators in comparable countries showing robust growth — trade, jobs, profits, government revenue, national income and wealth. There are no global headwinds. Government ministers and their craven enablers in the mainstream media who claim times have been tough worldwide are trying to deceive us.

IMF's signal of global economic 'headwinds' pales in the cyclonic vortex of Morrison's incompetence & inaction - no fiscal stimulus; no innovation; no action on climate; no action on drought; only neoliberal dogma, deliberate cruelty & christian fascism. https://t.co/Z7DXBz4vgD

Australia’s overall levels of wealth and income are at extraordinary record highs. The stock exchange hit a new all-time high last week. Corporate revenue and profits are still surging. The average increase in company gross profits over the last three years has been a thumping 14.4%.

Export values hit a new all-time high in September, the 13th new record high in 20 months. (See pink graph, below.) Australia’s trade surpluses have been at record high levels for the last nine months straight. And Australia recorded its first current account surplus in 44 years in the second quarter of this year. 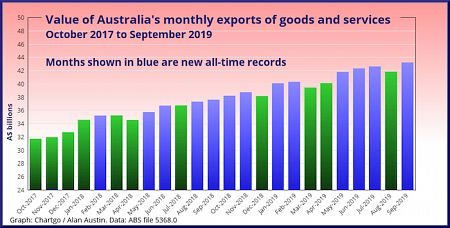 Clearly, the global economy is expanding, the local export economy is booming and the big foreign corporations which are extracting Australia’s resources are enjoying one of the greatest bonanzas of all time.

Australia’s doom is that a disproportionate share of the benefits of Australia’s extraordinary trade and commerce is going straight offshore. The little that stays in Australia goes mostly to the top income percentiles.

This is a damning indictment on both the competence and the values of the Coalition Government. This is not what was promised.