JOHN MENADUE: Coalition spin versus the facts on boat arrivals

Tony Abbott and Scott Morrison did not "stop the boats". John Menadue summarises how the boats were, in fact, stopped and who was responsible.

FROM SEPTEMBER 2015 – almost four years ago – Peter Hughes and I have pointed out repeatedly that former PM Tony Abbott and Prime Minister Scott Morrison triggered the surge in boat arrivals from September 2011. They did not stop the boats, as they claim, from December 2013 when Operation Sovereign Borders (OSB) commenced.

The facts Peter Hughes and I have set out have not been challenged. They have not been disputed in any way. But the mainstream media continues to accept Coalition spin on boats.

Perhaps our mainstream media have trouble with tables. So I decided to set out the facts in graph form, below. 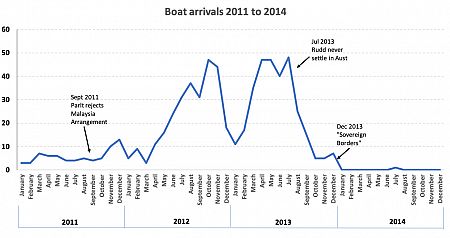 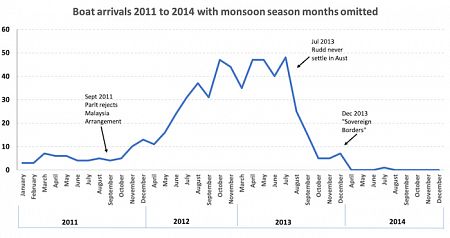 Source for graphs: Department of Immigration and Border Protection, Submission to the Select Committee on the Recent Allegations relating to Conditions and Circumstances at the Regional Processing Centre in Nauru, May 2015. (Submission 31), Data on Attachment H, following P 87.

There were three critical "decision months".

The first was September 2011, when the Coalition in the House of Representatives, with the help of the Greens MP and Independents, rejected amendments to the Migration Act which would have enabled the Gillard Government to implement the "Malaysian Arrangement". It was necessary to amend the Migration Act in light of a High Court decision.

Under the Malaysian Arrangement, 800 boat arrivals would initially be repatriated to Malaysia and Australia would accept 4,000 refugees from Malaysia who had been orderly processed in Malaysia, in cooperation with the UNHCR.

With the collapse of the Malaysian Arrangement, when boats were arriving at four to five per month, there was a steady and then rapid increase in boat arrivals until July 2013, when 48 boats arrived.

The second critical "decision month" was July 2013. In that month, the Rudd Government announced that any people arriving by boat would never be settled in Australia. As a result, boat arrivals fell dramatically from 48 in July, to seven in December 2013, when OSB commenced.

The third critical "decision month" was December 2013 when, with great fanfare, Operation Sovereign Borders commenced. But when OSB commenced, the job was almost done as the graphs show. Boat arrivals were by then only a trickle. Tony Abbott and Scott Morrison were involved only in cleaning up a few loose ends. The job was substantially done by the time OSB commenced.

I hope that with these easy to follow graphs, our mainstream media can, at last, understand three things:

The mainstream media has fallen for the Coalition’s spin on boats for almost four years. Perhaps the graphs will make it easier for journalists to understand. I am not confident. It is hard to admit that you have been conned.

Did Scott Morrison really stop the boats? https://t.co/JlMGwm33v2 @IndependentAus Morrison along with Abbott, prob most dishonest PM ever #auspol

John Menadue is a commentator, businessman and former diplomat. You can follow John on Twitter @johnmenadue. This article was originally published on John Menadue's blog 'Pearls and Irritations' under the title, 'The facts on boat arrivals that the media won’t face'.