Chevron: Buying the right to kill whales in the Bight

Chevron is accused of trying to influence decisions on its proposed Bight exploration — something that will surely have catastrophic effects on marine life. Sue Arnold reports.

WITH RECENT REVELATIONS that Chevron has been donating big money to the major parties before and after a Senate Inquiry into the Great Australian Bight, the giant resource company stands accused of trying to influence decisions on Bight exploration.

Chevron intends to start drilling up to four wells to search for oil and gas in the Bight next year, raising the ire of major environmental organisations, who fought hard to keep BP from drilling in an area which is an important nursery for Southern Right Whales, as well as to the tuna industry and tourism.

Although these organisations have focussed on the potential damage an oil spill could create, the very large elephant in the room (in this case, the ocean) has remained firmly locked in the political closet.

Ocean noise is a major threat to marine ecosystems and marine life. Shipping, seismic exploration, oil and gas production, commercial and military sonar, dredging, pile driving and coastal infrastructure contribute to a smorgasbord of anthropogenic sounds in the ocean.

Underwater noise impacts are major issues in the U.S., Canada and Europe. Many workshops and scientific conventions have been held, as scientists and regulators struggle with the ramifications to oceans and investigate mitigation measures. In December 2016, the Society for Marine Mammalogy held a week long convention in San Francisco, with many presentations and workshops focussed on underwater noise. Conference rooms, where noise issues were discussed, were packed out with scientists, noise experts and researchers.

Noise from seismic surveys and shipping has a devastating impact on the marine environment. Acoustic signals can travel long distances, depending on the state of the tides, wind, seabed and other parameters. Cornell University marine bioacoustics expert Christopher Clark says the cumulative impact of noise in the urbanised ocean environment seriously compromises whales.

He uses the following example:

Imagine a space ship is over your village and it’s sending explosions down to every ten seconds, driving everybody crazy. The choice is you either leave or die.

The acoustic world is ten per cent of what it should be. The whales social network is destroyed, their world seriously compromised, their immune and reproductive systems impacted by stress created by noise.

The use of sound for communication and detection in the marine environment is important for survival of marine animals. Marine animals depend on their hearing sensitivity to retain cohesion in groups; for echolocation among marine mammals; to locate and capture food; for detection of predators; for sensing their physical and biological environment; and for avoiding dangerous situations, including anthropogenic threats. There’s great variation in hearing sensitivity among animals, due to evolutionary diversification of anatomical structures involved in hearing and selection pressures on the way different animals utilise sound.

Anthropogenic noise can disrupt communication between cows and calves. Temporary and/or permanent deafness can result in long term effects to behaviour and survival.

Death caused by noise pollution can only be described as horrific. Lungs, air sacs and brains haemorrhage.

Fish can suffer injuries to internal organs and the inner ear that lead to mortality. Early stages of egg development and larval fish are particularly vulnerable.

In the light of considerable evidence presented and discussed internationally at workshops and conferences dedicated to the issue, the refusal of the major parties to discuss, much less develop, policy and legislation which address these impacts can only be described as a gigantic step into the Dark Ages. 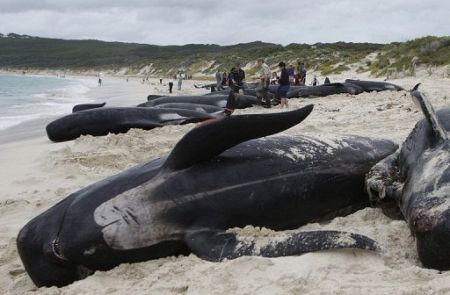 While an oil spill would be disastrous in the Bight, noise from seismic drilling, ships and infrastructure associated with exploration is a daily assault with potentially cumulative impacts on marine life.

The streamlining process was initiated to create a "one stop shop" for offshore petroleum and greenhouse gas activities in Commonwealth waters. It’s purpose? To ensure faster approvals and remove unnecessary duplication in regulatory processes, while maintaining the integrity and standards of the environmental assessment process.

Under the streamlined arrangements, impacts on the following matters protected under Part 3 of the EPBC Act will be assessed solely through the National Offshore Petroleum Safety and Environmental Management Authority (NOPSEMA):

NOPSEMA’s Advisory Board is dominated by former oil and gas industry executives with no experts on the marine environment or anthropogenic pollution.

These whales are suffering because of human created noise pollution. That has to stop. https://t.co/LO6JtoNpmw

Hunt’s decision no longer necessitates referrals for assessment under the EPBC Act by the industry and ignores Australia's international obligations to protect listed whale species (blue whales, in particular) thus making the whale conservation legislation, incorporated in the EPBC Act, irrelevant. In giving approval to the streamlining, the Federal Government is violating its obligations under the Convention on Biodiversity, Convention on Migratory Species and the United Nations Convention on the Law of the Sea (UNCLOS), which list anthropogenic noise as an internationally accepted marine pollutant.

States shall take, individually or jointly as appropriate, all measures consistent with this Convention that are necessary to prevent, reduce and control pollution of the marine environment from any source, using for this purpose the best practicable means at their disposal and in accordance with their capabilities, and they shall endeavour to harmonise their policies in this connection.

Summing up the Australian situation:

Cash for oil? Chevron donates thousands to Labor, Liberal as it pushes oil drilling in the Great Australian Bigh https://t.co/bYIdHd7Lsu

What this means is that if animals die beyond the three nautical mile limit and wash ashore, there is no way of knowing where the animal actually died. This then gives the Commonwealth and state governments an opportunity to argue over who is responsible.

In August 2016, ABC Radio National interviewed Michael Jasny, a lawyer from the U.S. Natural Resources Defense Council and an experienced expert on underwater noise. Jasny was critical of Australia’s response to the issue, highlighting the weak guidelines and inadequate response.

With the likelihood of Adani proceeding in the Galilee Basin with its Carmichael mine, combined with an exponential increase in shipping to and from liquefied natural gas (LNG) terminals in Gladstone, the impacts of underwater noise on the Great Barrier Reef have not been addressed.

Underwater noise can prevent coral larvae from attaching to a reef. Yet there has only been lip service paid to the totality of these impacts to the Reef in the Federal Government’s North-East Shipping Management Plan.

Ocean noise is up there with ocean acidity and warming seawater as a major threat to the world’s oceans. With no political party or mainstream media willing to raise the issue, Australia’s marine environment will continue to be a free-for-all for the resource industry.