Can #Fizza Turnbull make it to the end of the year?

Doc Martin perlustrates the tea leaves from his morning cuppa and predicts a foreboding future for Fizza this year.

THE SIGNS are not good for PM Malcolm Turnbull as 2017 slowly recovers from its Christmas hang-over and bingeing.

Already, the advance guard for the Trump faction of the Coalition is out and about, wining and dining and whining with the ready-made racists of the notorious anti-Muslim Q Society.

Cory Bernardi and George Christensen accepted invitations to speak at a Q Society fundraiser months ago, but over the slow-news holiday period, a couple of lazy journalists thought they’d revive the story — you know, just for the lulz.

Like most such stories, it first got a run in The Australian over a month ago, where it was treated as good news about mates helping a friend who happens to be an anti-Islam bigot. 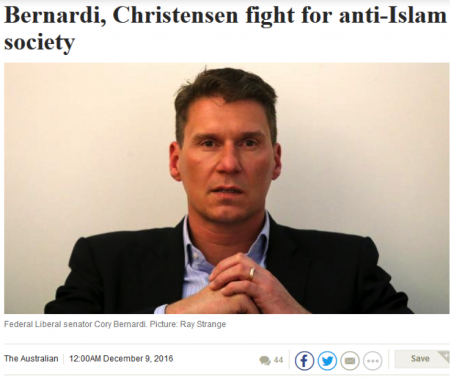 According to The Oz’ Chip le Grand, Bernardi and Christensen are stepping up to help the Q Society and three office-bearers to fund a defamation defence.

'[S]elf-styled conservative warriors Cory Bernardi and George Christensen will ­appear at a fundraising dinner to help an anti-Islam organisation and three members of a rival ­political party defend themselves in defamation ­proceedings.'

Why The Guardian decided that the first day of the new year was a perfect time to publish their own take on this story is a mystery to me. Perhaps it really is the silly season and the editor hoped that we’d forget that we’d actually seen this story somewhere else some time ago.

However, in a textbook case of cascading media coverage, once The Guardian story appeared on 1 January it was repeated (with only minor amendments) for the next 48 hours across Fairfax papers (3 January), on Sky news (3 January) and on the News.com.au website (3 January).

The simple summary of the story is that three leading members of ‘Australia’s premier Muslim-critical organisation’ are being sued by Mohammed El-Mouelhy, the head of the Halal Certification Authority. El Mouelhy claims he was defamed in two videos produced by the Q Society. The case is being heard in the NSW Supreme Court and has been running now for nearly 12 months. It is estimated that the Q Society will run up over one million dollars in legal costs to defend itself and its members. 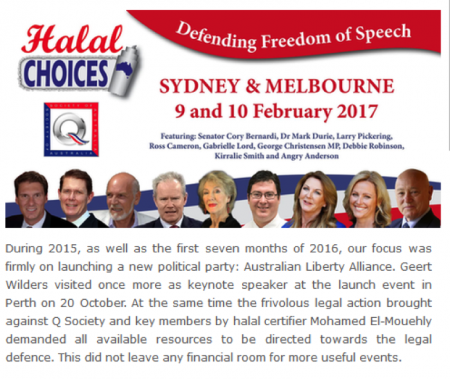 Cory Bernardi and George Christensen are familiar allies of the Q Society and Senator Bernardi has previously used parliamentary privilege to attack Mr El-Mouelhy’s reputation with vigour. I’m not suggesting that Mr El Mouelhy is a saint – or the Islamic equivalent – and this piece is not really about him. He is a convenient scapegoat for Islamophobia and probably does nothing to help his own cause if only a fraction of what Cory Bernardi says about him is true.

The point to be made about the willingness of Bernardi and Christensen to join a platform with half-mad cartoonist Larry Pickering, past-it performer and serial racist Angry Anderson and sundry other bigots to defend the Q Society’s honour is that it is really a jibe at the prime minister. It’s a giant “F*ck you” proudly displayed with a stiff middle finger and aimed squarely at Turnbull’s leadership.

Bernardi has recently returned from a study tour to the United States – paid for by taxpayers – where he spent most of his time drinking the Donald J. Trump MAGATM kool-aid. The Senator was so bent out of shape by his unbridled imbibing that he came home with his own embroidered MAGA cap and a plan to “make Australia great again” by starting his own political party for fellow Right Wing Nut Jobs. 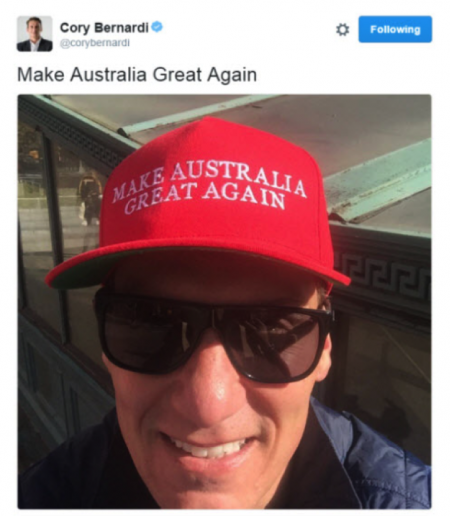 The kool-aid tastes better with MAGATM

So far, the party is hiding in plain sight, under the umbrella of Bernardi’s Conservative Leadership Foundation which is the vehicle for his right-wing, Christian, small government and free enterprise values. His natural allies are the likes of the Q Society, which (coincidentally) has its own political "party brand", the Australian Liberty Alliance (ALA).

However, despite claiming he wants to unite conservatives, Bernardi has moved to colonise the party space occupied by the ALA. Late in 2016, he launched Australian Conservatives as an "initiative" associated with his CLF structure. So far, this "initiative" looks like it is a fund-raising vehicle for sucking cash from the pockets of unsuspecting Rubes who like the idea of a red, white and blue Australia.

SILLY SEASON! Tony Windsor urges Bernardi to defect and says Malcolm Turnbull should "piss or get off the potty" https://t.co/7tWsHCs1yg

Bernardi has been denying that he wants to leave the Liberal Party and establish his own organisation since a National Press Club (NPC) speech in June 2014 — that’s a long time to have to deny something, so maybe we can’t believe him.

Here’s what Bernardi said over two years ago at the NPC:

I am absolutely delighted to be a conservative voice within the Coalition team. I’ve said that repeatedly over many, many weeks now.

Yet so many people found it so hard to believe.

But since then, Bernardi has been acting and talking like he is setting up his own party. So much so that only last week he was criticised by his once firm friend, Tony Abbott, as a wrecker and a splitter. And, coming from the expert wrecker and splitter, that’s quite the backhanded compliment.

The chatter about a split among the conservatives is not going away. Speculation about what Bernardi and Christensen might be up to really escalated in the post-Christmas torpor that is the Australian political silly season but neither man has done anything to dampen down the murmurs and rumours.

If anything, they’ve added fuel to an already smouldering bush fire.

Christensen’s defection from the Queensland LNP could be a potential tipping point for Turnbull’s leadership if the coalition loses George’s vote in the House of Representatives. Perhaps this is why Bananaby Joyce has been talking up the donut-shaped Queenslander’s chances of hooking a seat at the Cabinet table in Turnbull’s almost inevitable new year reshuffle (expected any time soon).

As The Sydney Morning Herald reported on 30 November 2016:

Mr Joyce said he appointed Mr Christensen to the key role of chief Nationals whip after the July election because he believes he has "great potential" to advance in politics.

I think at some stage in the future he is more than capable of running a portfolio and doing it well, Joyce said.

Is the tuckshop king ready for a cabinet post? Who'll bring the cakes?

But the tuckshop king might have deliberately cruelled his own chances of promotion by taking to Facebook to launch his own broadside at the Fizza, just before Christmas. 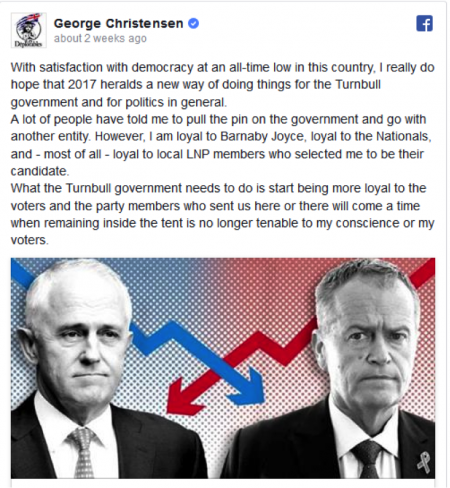 The tuck shop king has a Christmas message for Fizza, and  it's not "ho, ho, ho".

Christensen wrote that he is ‘loyal’ but who knows for how long, or to whom the tuck shop king is ultimately beholden. The social media post certainly had the desired effect of causing the media to (once more with feeling) drag out the ‘Christensen threatens to split’ headlines, which no doubt caused the Fizza a certain amount of holiday heartburn.

It’s not a good start to the political year for Turnbull to be facing an almost certain challenge at some point, perhaps even by mid-year according to some online betting sites. The Fizza starts 2017 as a lame duck leader who is beholden to the conservatives in his own party and must contend with almost constant sniping from his predecessor, Tony Abbott, who is genetically incapable of keeping his trap shut, particularly about thing he knows nothing about — such as the best site for Australia’s embassy in Israel.

This comment, like many other Abbott pronouncements on foreign and domestic policy, is not important for the content so much as the target. In this case, Two-Punch is virtue signalling his support for the Trumpist position in Australian politics.

Yep, Turnbull heads into 2017 already grumpy and unhappy. He is unpopular among voters and the majority of his own party is only just tolerating his leadership. An active and growing minority is doing everything it can to unseat him. It’s a matter of when, not if. When your bitter enemy is the one calling for party unity against his own former allies, you know you’re not the one who’s running the show.

Even the PM’s horoscope is not very inspiring. He will certainly have his "ups and downs"; his stress levels are likely through the roof already, and his leadership is a ‘one day at a time’ proposition.

Even the Fizza's horoscope lacks optimism for the year ahead

This post was inspired by a new year tweet from Opposition Leader Bill Shorten, who is really not very inspiring at all.

My offer still stands - let's work together to deliver an Australian head of state.

Seriously Bill, where have you been for the last few weeks? No doubt having seasonal drinks with Kimberley and Bill, and the gang, but mate, you are behind the times. The republic is not going to win you any friends in 2017 but standing up to Turnbull and getting a bit of mongrel into your strides will help you look like a fighting Labor politician.

The Fizza is bleeding to death, but the wounds are not from any damage you’ve inflicted, they are cuts from the slings and arrows of critics within his own party.

This year is yours to win or lose Bill, don’t fuck it up. Your destiny awaits you.

Does Bill have the bottle to fulfill his destiny in 2017?

Doc Martin is IA's political editor. You can read more by Dr Martin Hirst on his blog Ethical Martini and follow him on Twitter @ethicalmartini.

Have you seen the man on the left lately? Needed in Australia to help citizens with some opposition #notmydebt #auspol https://t.co/ViarqhBEJd

Beat the media Murdochracy! Subscribe to IA for just $5.