Campbell Newman is doing what conservatives always do in Australia, says Bob Ellis, cynically changing the rules to retain their grip on power. 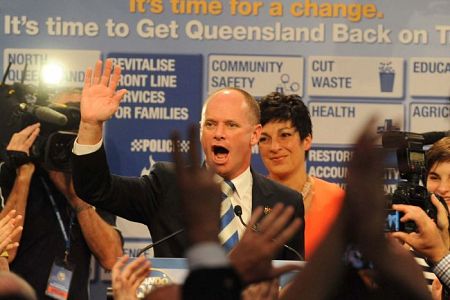 Queensland Premier Campbell Newman: yet another conservative cheating to try to win.

USUALLY, when the tories are in trouble, they change the rules of the game — or that's what they do in Australia anyway.

In 1952, they tried to outlaw the ‘Communists’ and to define as ‘Communist’ anyone two Federal ministers agreed was ‘Communist’, to gaol him, and confiscate his property. In 1975, they replaced dead Labor Senators with ‘Independents’ who, by delaying Supply, encouraged the Governor-General to break precedent and sack Whitlam. In 1965, they instituted the ‘Birthday Ballot’ by which eighteen-year-old males born on a certain day were sent off to be poisoned in a war we lost in Vietnam.

In 1996, they tried to privatise the ABC; then, being unable to do that, relentlessly reduced its money and appointed an idiot, Jonathan Shier, to run it, and grovelling Boards to corrupt its coverage of politics. In 2001, they contrived after 9/11 a fraudulent war, declared the day before the election was called, and whose ongoing slaughter put the election campaign on page 17.

In Queensland, for thirty years they had a gerrymander, and could rule with 26 per cent of the vote, two-party preferred and, in the ‘Moonlight State’, a gambling-and-prostitution racket of Boardwalk Empire proportions, which resembled Chicago or Atlantic City in the 1920s.

In New South Wales in the 60s and 70s the Premier, Robin Askin, personally ran an illegal gambling den, and with state policemen kept television reporters – but not customers – out of it.

What Campbell ‘Hanging Chads’ Newman is now up to is of this order. He wants to resurrect the gangsterdom of the Joh and Russ Hinze days with new laws permitting big political donations, and he wants to make sure only the right people vote.

He will do the latter by incremental stages. He will first bring in, if he can, the ‘non-compulsory vote’, and, by having a January election, make sure students between addresses, teachers out of town, academics travelling overseas, nurses, truck drivers and shiftworkers, don’t make it to the polling booths in the time available. He will also reduce the number of polling booths, so workers with jobs to go to queue round the block, and halve the number of pre-polling days, as Florida did this year.

He will then, as Florida does, deny the vote for the rest of their lives to anyone who has been in gaol, and, as in Florida, make sure Blacks and students and schoolies go to gaol for brief periods on minor charges (drugs, disorderly behaviour, demonstrating) and never vote again.

He will then use the low turn-out and long queues as a reason to bring in voting machines, which, as in Florida in 2004, will be rigged to favour him.

Or this is my view of what he is up to.

A former army man, he is keen on secret plans for sudden raids on unsuspecting enemies, as when he kept secret his plan to sack nurses, firefighters and twenty thousand civil servants till after he was elected. He had secret plans before he was elected to alter, disrupt, disable and corrupt the democracy in ways he is unveiling now.

And he may get away with it.

Queensland has had an ungerrymandered vote for only twenty years of its history, and its gangster-developers have not died out as a species, nor its racecourse racketeers, nor its election riggers. And ‘Hanging Chads’ has plans, or I believe he has plans, to bring back that world.

But he is a poor tactician; a good staff officer, probably, who would never in his original trade have been a conquering general. Outflanked already by Katter, Palmer, and the Gillard resurgence – and, as it happens, the Brough-Pyne-Ashby-Slipper cock-up whose tentacles may encoil him soon – he has already lost his tribe’s affections and two-thirds of his electoral majority to judge by the polls; and he will have lost all of it by April Fools’ Day if he is not careful.

So he has to do what he is doing to survive, by changing the rules of his democracy. And I believe he can’t. The secrecy he needs to prevail is no longer, post-Assange, the way of the world, and he is, I believe, now doomed, and, like Rudd, he will not see out his first term.