Victorian Labor joins Labor states of SA, ACT and Qld in trumping the Turnbull Government on renewables with a new RET of 25% by 2020 rising to 40% in 2025. RenewEconomy's Giles Parkinson reports.

The outlook for Australia’s four remaining big brown coal generators looks bleak following the Victorian Labor government’s decision to set a 40% renewable energy target for 2025. At least one may be forced to close by 2020.

The influx of another 5,400MW of mostly wind and solar capacity is sure to significantly reduce the amount of brown coal generation needed. But the impact could be even more dramatic because of the inherent inflexibility of the ageing brown coal power stations.

These graphs from Dylan McConnell, from the Melbourne Energy Institute, illustrate the problem that brown coal will face.

The first is the current state of the market, and the generation patterns of this past week. Brown coal remains supreme, untroubled by the relatively small contributions from wind energy. 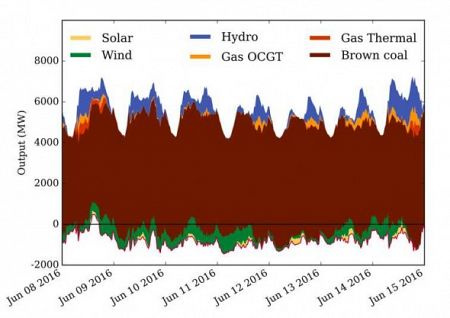 The second graph, however, tells a different story. It assumes that Victoria meets its 40% target in 2025, takes a best guess at the mix of wind and solar that gets the state there, and then shows what would have happened if that capacity had been in the system in the past week. 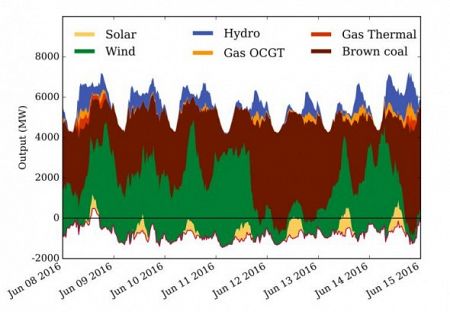 As is clear, the supremacy of brown coal is severely challenge, and on windy days only around half the capacity is required, often much less.

McConnell writes in The Conversation this week that an increase in market share of renewables, from roughly 14% today to 40% in 2025, will necessarily come at the expense of market share for existing power stations. And in Victoria that means brown coal, Australia’s most carbon-intensive power source.

‘The question now is can the brown coal generators collectively survive such a reduction in market share? And if they can’t, who drops out, and when? Or perhaps brown coal can be progressively phased out without too much pain.’

Market analysts are pointing the figure at Hazelwood, the most polluting power station in Australia and quite possibly the world. Hazelwood owner Engie signalled last month that it was a possibility, given the company is partly owned by the government, which is taking a leading role in enacting the Paris climate agreement.

However, Macquarie analysts suggest that the generator could be closed by 2020.

AGL, meanwhile, has said only that its principal brown coal asset, the Loy Yang A power station, could stay operating until its anticipated phase out in 2048.

McConnell says that if brown coal generators are shut down, it will be good news for Australia’s national climate change mitigation commitments.

‘At average Victorian emissions intensity, by the time the 2025 Victorian target is fulfilled, the new renewable generation in Victoria would be avoiding the emission of some 18 million tonnes of CO₂ per year.’

McConnell also noted that exporting brown coal to other states is not likely to be a winner. Links to Tasmania and South Australia are limited by capacity, and while both states are looking to build new links, this is primarily to export more renewable energy rather than import coal. NSW, however, may remain a key market.

This article was originally published in RenewEconomy on 17 June 2016 and has been republished with permission. You can follow Giles on Twitter @GilesParkinson.

It's the end of an era – Scotland's last coal-fired power station has now shut down! https://t.co/zmQiDILUKM pic.twitter.com/roTkjLBU1w

“...communities around Australia are impatient to see new projects get up in their region.” https://t.co/fDKddhSZK2 #renewables

If you support renewables, don't support COAL-ition. Subscribe to IA for just $5.