Documents now coming to light show the Iraq war was primarily about dividing up the country’s oil wealth amongst the US and the UK. George Said reports. 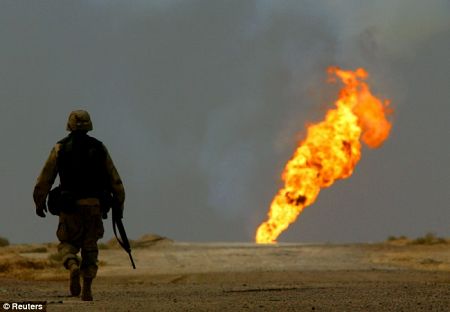 British government ministers lobbied the Bush administration on behalf of BP for a share of Iraq’s oil reserves in exchange for British military commitment to US planned efforts to remove Saddam Hussein.

Baroness Symons, the then Trade Minister, told BP of their expected windfall gains in Iraq in November 2002, five months before the invasion.

According to the UK’s The Independent newspaper, Greg Muttit obtained this information after five years of a campaign to gain access through freedom of information legislation. Muttit will publish his book Fuel on the Fire next week.

This shows the hypocrisy of Western governments’ denials of the truth. They claimed they had no self-interest in invading Iraq. Weapons of mass destruction were the excuse.

After the war, the 20-year contract described as the biggest in oil history involved half of Iraq’s oil reserves; that involves 60 billion barrels. The benefit of the war was a mere $US658 million a year profit from Rumaila in southern Iraq. Rumaila is the fourth largest oil field in the world.

Baroness Symons became an advisor to Merchantbridge investment bank, which profited from Iraqi post-war contracts to undo the damage done to that country. She is a consultant for Consolidated Contractors Oil and Gas, a Labour Life Peer and a former General Secretary of the FDA Trade Union.

Tony Blair, since he stopped being Britain’s Prime Minister, reportedly made 20 million English pounds through business deals. He has accepted consultancies with JP Morgan and the Kuwaiti Royal family. He has advised one of the biggest investors in Iraq’s oil rich Kurdistan region; he serves as a Middle East peace envoy.

In Iraq the civilian deaths as casualties of war stands at 105,000 according to Wikileaks.  The Iraqi coalition military fatalities are 4765. Only the minions have died and many more minions maimed, widowed and orphaned.

In his memoirs, Bush reveals he gave serious thought in John Howard's position on the contentious 2003 war in Iraq. In January 2009, Bush at a ceromony in Washington awarded John Howard "The Man of Steel" with the Medal of Freedom.