Two men involved in a secret Brisbane City Council agreement, which provided one of them with a multi-million dollar profit, have since been linked in the sale of a three-bedroom house for a reported $5.45 million. Steve Bishop reports.

Bevan Lynch, the chair of Brisbane City Council's Urban Futures Brisbane Board, was instrumental in creating a council infrastructure agreement that resulted in a company owned by LNP donor Ian Douglas Ferguson Macallister being able to sell 227 hectares of land for $68 million, plus GST, in 2014.

At the time, according to the Courier Mail, Mr Lynch had been trying to sell 'his Hamilton Hill property' since 2013.

Land title records show that the title of 20 Eldernell Terrace, Hamilton, was transferred from Janene Margurite Lynch, Mr Lynch's wife, to Ian Douglas Ferguson Macallister and Joy Elizabeth Macallister, with the transfer being lodged on 8 August 2016.

It is understood that in early 2015, despite favourable publicity, the property had failed to sell at a recommended $4.8 million.

As reported by Independent Australia on June 2, Mr Lynch and Mr Macallister were brought together by Brisbane Lord Mayor Graham Quirk in order to solve "issues" regarding land owned by Mr Macallister's company, Institutional Investments Pty Ltd, at Upper Kedron.

The eventual purchaser, Cedar Woods Pty Ltd, reported in a submission to the State Government that attempts by Institutional Investments to sell the land to several major developers had failed because of perceived problems with the Council's local plan. 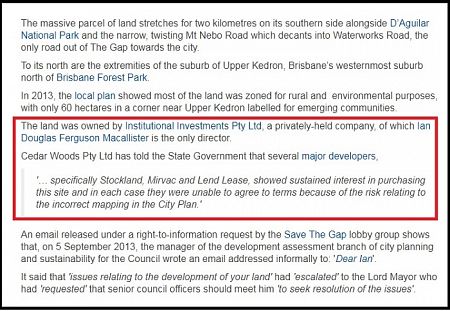 Mr Lynch was a central figure in finding a solution.

On 5 March 2013, a Council official emailed Mr Macallister, with a copy to Mr Lynch at his company MLDesign, saying:

'The Lord Mayor has requested that Bevan Lynch, John Jordan and Richard Sivell meet with you to seek resolution of the issues...I have spoken with Bevan and he advises that he will be in contact with you shortly...'

'John and Richard, when can we meet to review and discuss an environmental corridor we can live with on the McAllister [sic] Upper Kedron land, regards, Bevan.'

On the same day, he emailed others involved in the discussions:

Having been advised of a plan to create an infrastructure agreement as a solution to the planning problems, Mr Lynch emailed Mr Jordan and Mr Sivell on October 8 2013:

'I will now meet with the owner and his consultants and ascertain if they are agreeable to proceed on this basis.'

Mr Lynch was asked by Landpartners Ltd, a Brisbane surveying and planning consultancy, when the agreement would be ready. He responded on November 5:

'I cannot give you a time for the agreement to be drafted as we are not able to utilize any standard document as we are creating a unique agreement...'

The agreement was eventually signed in February 2014, enabling the land, previously unsaleable to three major developers, to be sold for $68 million plus GST.

The house at 20 Eldernell Terrace, Hamilton, was mortgaged to Janene Lynch for nearly 20 years, but phone records give a listing for Lynch BT and JM.

The Courier Mail reported on 9 October 2015:

Prominent Brisbane architect and urban planner Bevan Lynch has been trying to sell his Hamilton Hill property for two years.

Now on his third real estate agency, he hopes to get a few offers when expressions  of interest close on Monday.

Lynch bought the Eldernell Terrace property nearly 20 years ago and has tipped a bucket load of dough into the home, which has a 2500-bottle wine cellar and fantastic city views.

The article reported Mr Bevan had noted that market watchers had been bandying around values between $4 million and $5 million for the home. 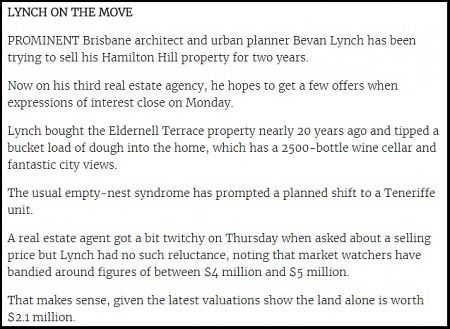 Rosemary Ahearn, an agent for Ray White Ascot, had achieved impressive publicity for the property in 2015 but had failed to find a buyer.

Oldlistings.com.au says the property was last listed in November 2015.

More than six months later Mr Macallister bought the home. Two men who had been unable to sell their properties had helped solve one another's problems.

Neither Mr Lynch nor Mr Macallister responded to invitations to comment about the sale. 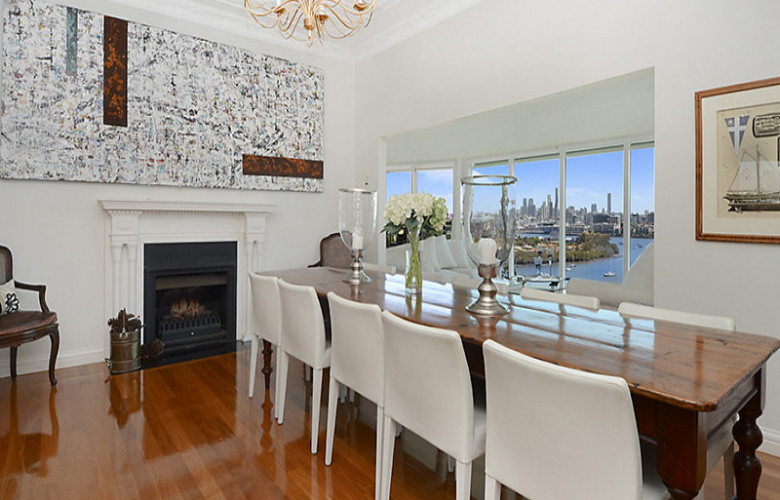