BONUS EDITORIAL: Scott Morrison set to do the Bowen tango

In Canberra yesterday, the Federal Opposition Treasury spokesperson, Chris Bowen, gave his Budget-in-Reply speech to the National Press Club. It was a quietly impressive performance.

In his address, Bowen revealed he had recently become Australia’s second longest serving shadow treasurer since the position was created in the 1960s. It was “not a position I hankered for”, he said in his low-key way, to scattered chuckles from the crowd, “but in this game you take what you can get”. His methodical presentation and comprehensive response to questions from the floor suggested quiet confidence, competence and a steady prudence — attractive qualities for a future steward of our money. His understated delivery reflected the frills-free approach of his much-derided leader, Bill Shorten.

Bowen’s performance was a sharp contrast to the carnivorous, bumptious display from Treasurer Scott Morrison in his Budget speech last week. As reported here, Morrison’s smug motormouth presentation in a post-Budget interview on ABC 7.30 revealed he thought this was the one that would “bring home the bacon”. However, three subsequent opinion polls gave not even a dead cat bounce to the Government. As the week went on, even Morrison’s predatory smile began to look a little forced as the usually blue mainstream media gave his Budget for the rich and multinational an off-key raspberry chorus.

Why do you allow people to negatively gear 10, 20 properties if your concern is for police officers and nurses and teachers, @barriecassidy asks @ScottMorrisonMP #Insiders #auspol #Budget2018 pic.twitter.com/BY82FiaK8g

This all culminated in an irritable and shouty Morrison in front of an increasingly incredulous Barrie Cassidy on ABC Insiders on Sunday. By the end of this topsy turvy interview, Morrison’s permanent leer looked more like a rictus grin. This arrogant and erratic Treasurer looked like one who knew his days were done. By Monday, at a townhall meeting in a Brisbane swing seat put on by (who else?) Rupert Murdoch’s Sky News, Morrison seemed close to sane. Barely buoyant, as if much of the hot air had leaked out of a massively overinflated windbag.

It is a sign of how serious the mainstream media take Morrison’s “ten year tax cut plan” that, by today, discussion of it has almost disappeared. Theoretical tax cuts set for years after a Government is almost certain to have been displaced have trouble inspiring enthusiasm in even its most ardent supporters.

Instead of the Budget, much of the media appear focussed on the Opposition after four Labor MPs (and one crossbencher) resigned last week over citizenship concerns. Apparently, these by-elections represent an opportunity for the Government after notoriously unreliable pollsters Reachtel claimed one of the Labor MPs was behind in her Brisbane seat.

"And the ReachTel survey is telling us that Longman residents don't like the LNP's policies but plan to vote for..." https://t.co/tj3mdlUCZZ

In the seat of Longman, trumpeted Murdoch’s The Australian (who else?), a

‘… Reachel [sic] poll published in The Weekend Australian showed the LNP was ahead of Labor 53-47 per cent on a two-party-preferred basis, with the seat on track to be the first that is regained by a sitting government in a by-election in nearly 100 years.’

Sure, sure. The truth is the Liberal Party are not even standing candidates in the two Western Australian by-election contests. The thought that the ALP is behind in Longman by the same amount the Coalition is trailing Labor in Queensland simply defies credulity. Susan Lamb will almost certainly win in Longman, just like Labor will win in the other three by-elections in which it has incumbency.

The Government’s best chance may be in Mayo in South Australia, where they have selected incoherent IPA fluffer Georgina Downer (the daughter of fishnet Alexander) to take on sitting Nick Xenophon party (whatever it is called these days) MP Rebekah Sharkie. Even there the Liberals will almost certainly lose given overexposed Georgie’s well-publicised views on such things as abolishing penalty rates and reducing the minimum wage to $5 an hour. Some publicity is not good publicity and dull-brained Downer is a shocker.

In fact, the by-elections are a threat to this beleaguered Government. For one thing, they are a referendum on Morrison’s Budget — and all indications so far suggest it will be as popular as syphilis. Moreover, they are a referendum on the Turnbull Government. A shaky Government of no achievement, facing a hostile takeover by the Right, in which one of its rare female frontbenchers has just been disendorsed and the PM is too weak to save her. If, as seems likely, voters return all the incumbents with increased margins, it will be a disaster for Turnbull and may spell his end.

Because the only thing going for this Government is steadfast support from Australia’s uniformly dry mainstream media. But such was the lukewarm response to last week’s Budget, it appears as if even this rather subdued claque is losing interest. Election after election has shown Rupert Murdoch, in particular, loves to back a winner. If Murdoch sees the writing on the wall after the by-elections, his waiting assassins will be set into motion and the career of Australia’s puffed up Napoleon will be over — probably via a spill to one of the lurking rightwingers, like Dutton, or after an overdue early election.

Notable that Peter Dutton, Graham Quirk and Tim Mander were all present at preselection vote where Jane Prentice was was booted?

Could guarantee those blokes would have had a hand in helping to punt her I'd say UGH! https://t.co/cweFU4u8kS

Either way, this Government is in its last days. Write it on the wall: Chris Bowen will be reading out Australia’s next Budget. The reckless reign of the Liberals will be over. Intemperate blowhards like Scott Morrison will go back to signing off such incandescent tourism slogans as “Where the bloody hell are ya?” Malcolm Turnbull will retire with his ego to his Cayman Island millions. And quiet and unfashionable Bill Shorten − and his downbeat team − will begin to mop up all the mess they’ve left behind. 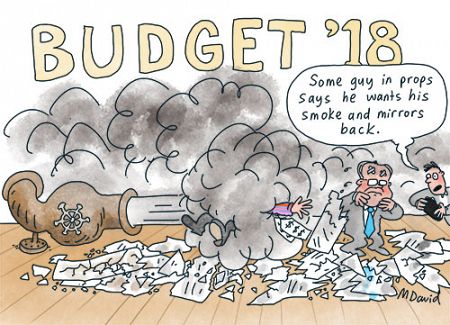 This editorial was originally published as part of the Independent Australia weekly newsletter. These editorials are usually only available to subscribers. It takes less a minute to subscribe to IA and costs as little as $5 a month, or $50 a year — a very small sum for quality journalism and many great extras.

I'm just not sure this is going to cut it as an effective response...