"Where was he when I was trying to get health care in ’93 and ’94," stormed Hillary Clinton. Literally behind her, according to the photographic evidence. Jon Queally from Common Dreams reports. 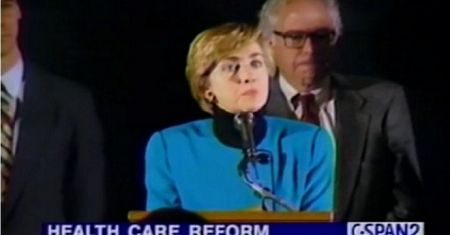 Where's Bernie? Oh, there he is! Then Congressman Bernie Sanders (I-Vt.) standing right behind then First Lady Hillary Clinton during a press conference on healthcare reform in 1994. Oops! (Photo: Screenshot/C-SPAN)

ANOTHER QUESTIONABLE SALVO aimed at detracting support from rival Bernie Sanders may have come back to wound Hillary Clinton on Saturday after comments about his stance on healthcare reform efforts in the 1990's was countered by a flood of evidence that revealed exactly "where he was" on the issue.

Mrs. Clinton accused Mr. Sanders of distorting her record and said the Vermont senator, who has made a single-payer health care system a signature part of his campaign, had not always been such an advocate on the issue.

"I don't know where he was when I was trying to get health care in '93 and '94," a fired up @HillaryClinton says of Sanders.

She said she has "a little chuckle to myself" when she thinks about the current debates over health care. "I don’t know," Mrs. Clinton said. "Where was he when I was trying to get health care in ’93 and ’94?"

The answer: “Literally, standing right behind her,” a Sanders spokesman, Mike Casca, said on Twitter, posting a photo from a 1994 news conference that shows Mr. Sanders next to Mrs. Clinton when the then first lady spoke about the White House’s proposed health care overhaul.

And just to clear up any lingering doubt, should there be any, here's video footage from the 1994 news conference:

Subsequently, Casca sarcastically tweeted out this photo to Clinton spokesperson Jennifer Palmieri, which revealed more evidence about "the mystery" over where Sanders stood (or in this case, sat) during the healthcare reform battles of the era:

secretary clinton and bernie are sitting next to each other in this photo. what does it all mean, @jmpalmieri?! pic.twitter.com/XUQpF1uEjk

'As Clinton has discovered recently,' wrote Peter Wade at Esquire on Saturday,

'... the Internet age means instant fact checking. Whether she is talking about Bernie's record or Nancy Reagan's efforts (or lack thereof) to help those with HIV, the Internet fact checkers have their fingers poised over the keyboard ready to correct any claim.'

for the record, she did know he was there: “i’m grateful that congressman sanders would join us today from vermont.” https://t.co/B2cvs4UNth

This story was originally published by Common Dreams on 12/3/16 under the heading 'Clinton Healthcare Hit Backfires as Evidence Shows Sanders 'Literally' Right Behind Her' and has been republished under a Creative Commons licence.