With a budget rejected by the public, backbenchers skittish about dismal poll numbers and uni students revolting, what does Tony Abbott do when an old-age pensioner tells him she needs to work on a phone sex line to survive? He smirks and winks. Bob Ellis comments.

Bad numbers add up to imminent end of Abbott experiment

The change in Abbott’s and Hockey’s fortunes (and it’s now likely they won’t both be in the same job in September) is a measure of how influential two sets of numbers – Newspoll and Nielsen – have lately been.

Talk of displacing one or both of them is on the rise and forty or fifty Liberal and National members are worried – frantically in some cases – about losing their seats, especially in Queensland.

These polls are very influential.

Many people, having read them, change their voting intention to keep up with the crowd, the fashion, the zeitgeist, the prevailing winds. They are, perhaps, the most potent weapon in the arsenal of politics.

And so it was last August when ReachTel’s and Lonergan’s machines, ringing on Thursday night eighty people for every one that took the robocall, found Rudd, Swan, Clare, Burke, Bowen, Murphy, Melham, Dreyfus and Bradbury would lose their seats and a younger generation of Labor leaders be swept out of history.

Murphy, Melham and Bradbury did lose their seats, but the others did not, and the confected panic about them consumed, in many headlines, the wave of confidence Rudd’s return had momentarily stirred, and made the idea of him losing − Rudd losing, Rudd the unbeatable − in the public mind a certitude.

ReachTel and Lonergan were thus propaganda bunker-busters and big lies – or premeditated inexactitudes – and their publication lost Labor four or five seats, one of them certainly Forde, which Beattie with better initial published polling might well have picked up.

ReachTel and Lonergan ring landlines when no young people are at home, and so were able to exaggerate the anti-Labor swing last year. This year, however, the old people are voting Labor too, and the news on the landlines is nearly as dire as it would have been on the mobile phones of the under-forties rung in the pub or the mall or the car driving home on Thursday night.

Nearly as dire. But not quite. Morgan, ringing mobiles, last weekend found Labor on 57.5 per cent, numbers that would lose Pyne, Hockey, Cormann, and, probably, Abbott their seats. And a momentum like the Rudd-Swan-Burke-Bowen-Dreyfus figures of last year gives, this year, the present Government no great hope of re-election.

Re-election this September, probably. Abbott’s cowardice (he now foresees assassination in Deakin University) in the Senate will not save him. Palmer will keep upping the ante till he calls an election.

Clive Palmer will even vote to uphold the carbon tax.

He has said he will do so if Abbott does not cancel a lot of things and he will keep his word. An election would give him three or four seats in the House, and 10 in the Senate, and there is no point, any more, in Palmer waiting two-and-a-half years to overthrow a gang he so detests, who misspent the millions he gave them and now deride him as a drongo.

The Newspoll-Nielsen Effect will put Abbott, next week, sixteen points behind Shorten as preferred Prime Minister. There is no precedent for this in countries that do not, usually, change government by army coup. Once the prime minister begins to refuse to go to public meetings (Abbott is famous for his feisty defiance of bellicose crowds in the past; no more, it seems), we will truly have a government ‘in the bunker’ as few Down Under have been before.

And all because Murdoch couldn’t control Nielsen, and had to supply, with gritted teeth, a plausible Newspoll, showing Abbott losing forty seats.

Tony Abbott is a winker

The wink Abbott gave when he heard a dying 67-year-old woman was a phone sex worker – though unremarkable as a reaction given he forgot the camera was on and he was talking to Jon Faine — was politically indefensible, and, like General Patton slapping a sick soldier, will bring him down.

No more than 41 per cent of women will vote for him after this – ever – and he will have to resign.

I give him thirty days. 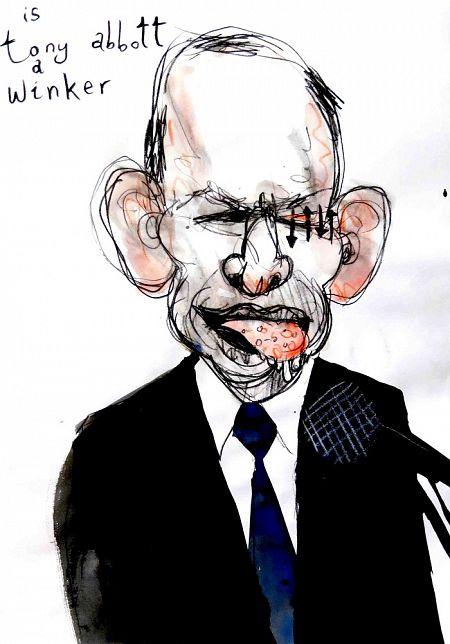