If the Turnbull Government is serious about investing in the nation’s future, it needs to abandon its aversion to historically minor public debt and deficits, writes economist Philip Soos.

CHARTING THE long-term trends of Australian public debt at the Federal and state/local levels demonstrates that, contrary to the political and media commentary claiming it is at record levels, the opposite is the case. This data is rarely shown as it immediately falsifies the misleading mainstream narrative, despite the frantic attention dedicated to it.

The long-term trends in public debt

The most common measure of debt is as a proportion of GDP. The ratio was far larger pre-WW2 and today a fraction of its former size. Federal debt peaked at 104% in 1946, while the state/local ratio peaked at 123% in 1932. In total, public debt reached a peak of 170% in 1932. Post-WW2, the ratios fell swiftly through strong GDP growth and the rise in taxation offsetting the need for debt.

Federal government net debt – adding in what others owe to it – is much lower than gross debt. It was a net creditor between 1972 and 1976, and again from 2006 to 2009. The balance of debt, however, is only part of the story. In 2016, net interest payments were 0.7% of GDP and 2.8% of government revenues. Low interest rates today mean repayments are significantly lower than in previous decades. 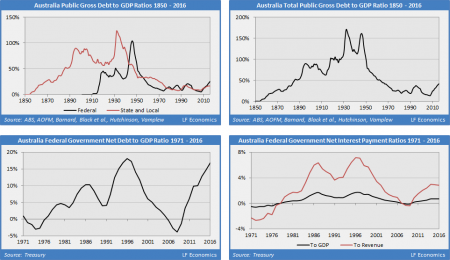 Even if the public gross and net debt to GDP ratios continue rising, this may not result in higher net interest costs, given the decline in interest rates. Indeed, the nominal public bond yield in 2016 is the lowest on record, meaning that it is cheaper than ever before for governments to use debt finance to invest.

The combined balance sheets of all levels of government (Federal, state, local and multi-jurisdictional) provide the most accurate overview of public finances. As of 2015, total public asset values outstripped liabilities, for a net asset balance of 52% of GDP. Total net debt is only 20% of GDP, though the net financial worth ratio was -48%. The total public sector balance sheet data demonstrates Australian governments are in a strong economic position. 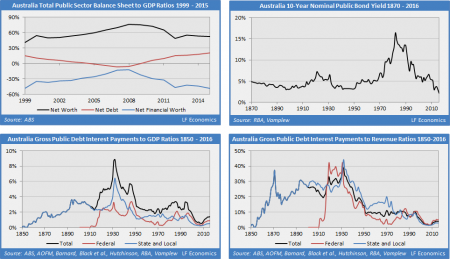 The trends in gross public interest repayments to GDP and revenue illustrate a significant decline over the long-term. Between WW1 and the Great Depression, interest payments consumed a hefty 40% of public revenue; today, it’s a tenth of that.

The federal budget balance has spent more time in deficit than out of it, with a peak deficit equal to 4.2% of GDP in 2010. Historically, surpluses occurred during periods of strong economic growth, including the development of real estate bubbles. If not for Federal and state/local deficit spending, GDP growth for 2016, quarter two (2016Q2) would have been close to zero.

No matter how Australia’s public debt is measured, it is at near-record lows today. Governments at the Federal and state/local levels had a much more difficult time fiscally pre-WW2 than today. Research indicates there is no evidence for a specific public debt to GDP threshold that undermines economic growth. Yet there is a never-ending barrage of commentary about the need to transition back to surplus.

Persistent government surpluses will eventually cause a breakdown in the economy as it extracts income from the private sector, especially when a continuous current account deficit is run. The private sector can only grow through increased indebtedness. Those calling for public surpluses are saying that households and businesses need their savings to be run down, become increasingly indebted to banks and accumulate fewer net financial assets.

The Howard Government provides a recent example. From 1996 to 2007, most annual budgets produced a surplus, while the current account remained in persistent deficit. The result: private debts ballooned, particularly in the household sector, where Australians are or close to the most indebted in the world.

Two major reasons for opposing deficits are absent: firstly, inflation is very low and falling, with the GDP deflator close to zero and/or negative over the last several quarters; and secondly, stories about "crowding out" are incorrect due to the falsified neoclassical banking theory of financial intermediation.

This long-term data is rarely shown or referenced as it demonstrates the mainstream commentary about the "budget emergency", "peak debt", "bankruptcy", "running out of money", "record deficit" and so on is blatantly false. The Government has fabricated budget panic to ram through unpopular measures, intentionally and adversely targeting low-income earners.

This hysteria is provoked and amplified by elites and their economists to:

Opposing public debt and deficits is mistaken. The estimated deficits of 2.3% and 2.0% for 2015-16 and 2016-17 respectively, combined with a historically low public bond yield, indicate these are quite small. They are certainly sustainable despite the unsubstantiated assertions they pose economic risks.

Compared to the pre-WW2 era, governments of today are a picture of fiscal responsibility and prudence, whether LNP or ALP. Australia’s experience suggests high levels of public debt are not detrimental.

A more sensible approach is for government to engage in moderate and persistent deficits, with the stock of public debt tracking nominal GDP as the economy grows larger. This reduces reliance on increased private sector indebtedness to drive economic growth and wards off the threat of asset bubbles.

The private sector has neither the capacity nor credit rating to rejuvenate Australia’s ailing and second-class infrastructure, much of which is a national disgrace. If government is serious about investing in the nation’s future, it needs to abandon the aversion to historically minor public debt and deficits.

Philip Soos is the co-author of Bubble Economics: Australian Land Speculation 1830-2013 and co-founder of LF Economics. You can follow him on Twitter @PhilipSoos.

But... but the vested interests told me Oz housing was affordable due to low interest rates... (even @Domaincomau doesn't believe that). pic.twitter.com/2nH890Ans8