Rosie Williams wants access to all the budget data on budget night in a useable format for her BudgetAus database, but the Government won’t allow it. Why not?

HAVE YOU EVER wondered how much Australia spends on welfare, border control or the university sector?

Is 35 per cent of the budget spent on welfare too much or is $4B spent on border related programs too little?

Most people, including those considered qualified to hold opinions on the merits of these programs, could probably not give you a figure. Most of us do not even know what kind of figure the total budget expenses amount to, although given the uncertainty in the government’s own forecasting apparently neither do they!

We hear figures in the millions and billions bandied about — but what does this mean to the average person? For such a literate nation it is surprising how little we know about our own national spending.

Less than a year ago now, I decided to learn database programming and, for this, I needed data that I could use for free. I came across theopenbudget.org, created during last year’s GovHack event. The data set was in no way complete, and I wanted much greater functionality, so I spent weeks and then months manually re-creating the data in ways that would support the kinds of search queries used in BudgetAus — the kind that can answer my original questions.

Having completed a functioning database, I then realised BudgetAus is likely to be the first time the complete Federal budget has been put online in a database for use by the public. 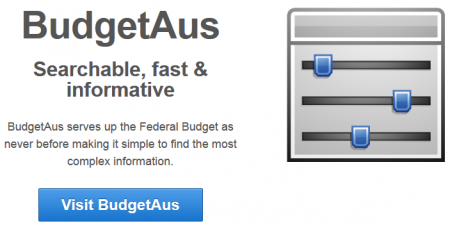 The reason a database is useful is because it is necessary to allow user-driven queries and calculations. For example, you can find all the programs relating to housing or the environment and tally them up across the Portfolio Budget Statements without manually going through 20 or so PDF’s with a pencil and calculator.

Few people have that kind of time to do such research manually, so we have just satisfied ourselves with the statements put out by government, like: ‘The government will spend $3B over 5 years on x’.

This gives us no insight into how that program fits into the budget as a whole, so we are left none the wiser if this is good or bad fiscal policy. You can’t make judgements about fiscal responsibility without considering programs in the context of the entire budget.

Australia appears to have come very late to the concept of budget transparency — it being an election promise of Lindsay Tanner back before the 2007 election. Upon Labor’s election, Tanner put Andrew Murray onto the task (called ‘Operation Sunlight‘) of getting all the government departments to coordinate, evaluate and report at program level for the first time.

It may come as a surprise to many ‒ it sure did to yours truly ‒ to find out that this basic level of government accountability is quite a new thing for our nation and, without it, a site like BudgetAus.net would not even be possible.

The government has begun an initiative to make its data available for re-use, in sites like BudgetAus. Data.gov.au is a growing catalogue of data sets to which public servants have been asked to contribute. The Australian Federal budget data may eventually find its way onto such a site.

The point of making data available in multiple file types is because data sets, by definition, are large and unwieldy. Putting the budget data in by hand — as I did took over two weeks, working 6 days a week in sweatshop-like conditions, before having to be re-done with every change or correction.

Yet according to The Australian Government Information Management Office’s Pia Waugh (who is in charge of Data.gov.au), there is no technical reason why this data can’t be distributed in reusable formats right now — well, no technical reason anyway. Having spent most of the year building BudgetAus.net, I naturally thought that going live with the new budget data on budget night would be an appropriate goal for the project. You can follow the story of my efforts to get access to budget data in re-usable formats in budget lockup on my blog.

As can be seen, getting Treasury to support efforts at budget transparency is an uphill battle. Personally, I think the Government is taking the wrong approach. Given the competing demands on the budget, which is now causing them all kinds of havoc, educating the public about what is realistic to expect when so many competing demands are in play can only assist their cause.

It is only when we see all of the programs listed by size, or run queries to compare changes in programs between budget years, that people can see what is actually going on. I leave people to draw their own conclusions from those queries, but the point is that the public are entitled to have this information, to be able to drive their own research and the right to engage at this level with the national budget.

Giving BudgetAus access to the requested file types on budget day can only further this engagement. I urge the government to reconsider their position.