By putting refugees out of sight, it makes it much easier for the Abbott Government to depersonalise them and encourage their demonisation by the public at large, writes Lyn Bender.

ARE YOU TIRED of hearing about refugees and boats? I certainly am.

In 2009 I was weary of the subject when I wrote in the Fairfax press:

“Its déjà vu as those people cry for help.”

In those days, refugees were being referred to as people — albeit derogatively, as ‘those’ or ‘these’ people.

But imagine how tired the refugees are becoming of this endless groundhog day of persecution that I wrote about in 2012.

But of course as I said, we’re not racist we are just trying to “stop the boats”.

This is the latest catchcry in the long litany and tedious recital of formulaic answers to a seldom addressed question: just why exactly are we persecuting those fleeing from persecution?

There have been some brief moments (historically speaking) of displays of grief at the plight of refugees, especially the innocent children.

Joe Hockey, when in opposition, emotionally stated in Parliament that no unaccompanied minor would be sent offshore unless it was over his dead body. But political life moves on and now that Joe is the treasurer in the new Abbott Government, he is conspicuously silent on the fate of refugee children.

According to reports, it seems his Government can countenance refugee children on small boats being pushed back to Indonesia and experiencing the terror of ‘warning shots’ being fired across the bows from giant Australian Naval vessels. The government has denied these in its ‘refuse to comment’ style.

“When we have something to say then we will have something to say,”  said Scott Morrison, signalling the end of the regular government briefings that have become infamous for their lack of substance. This is secrecy with a purpose, he claims, rather than a failure to inform and be accountable to the Australian people.

But some of us have longer memories than may be encompassed in the latest press briefing. Many will remember the Howard years that bear an uncanny similarity to current news reports.

I was employed at the now closed Woomera Detention Centre for six weeks in 2002, during a period that included the activists protest demonstration and Easter break outs of ‘detainees’.

I was one of several health professionals who told the hitherto purportedly hidden story of the suffering of refugees in detention. The most ironic aspect of this was the fact that people seemed to have not known about conditions in the centre. Although night after night I had watched the ABC for news of Woomera and the refugees from my old Defence Force accommodation flat in the Woomera township. This would be my relaxation, after exhausting days that involved attending to regular suicide attempts ‒ some by children as young as 10 ‒ hunger strikes and acts of self harm on a daily basis. I was keen to know what information was getting out.

On the day I left, I told my story to the ABC and continued to tell the story for over two years. In fact, I am still telling the story.

The Rudd Government’s decision to wind back the Howard solution was seen as the end of a nightmare for asylum seekers in Australia by myself and others. By 2007, we all knew.

But it seems that we have, again, forgotten.

Oh the power of the oft repeated slogan and the arousal of fear and threat. According to Prime Minister Tony Abbott we are now on a war footing in the battle of the boats. This is worded as though we are at war with people smugglers — not precisely as a war on refugees.

But even though the slogans are subject to slight variations, the repetition continues. We are back to the Howard era of stop the boats. But in stirring up fear and loathing of these hapless people, politicians are finding that they have a tiger by the tail and have begun to back themselves into a corner. Having framed ‘the problem’, they must now find the (final?) solution.

Such a standoff   and showdown occurred between the Howard Government and the MV Tampa, in 2001. This Norwegian vessel rescued 430 people at Australia’s request — only to be told that Australia would not accept the refugees and that they were now the ship’s Captain Arne Rinnan’s problem.

As the old saying goes:

‘Those who are ignorant of history are doomed to repeat it.’

That is the thesis of Milton Mayer in his book entitled: They thought they were free – the Germans 1933-1945. Secrecy, surprises, and small incursions into the established realms of freedom, all became cumulative. These methods were intended to make people   become used to the idea that decisions were so complicated they must happen in secret. This was said by the Nazis to be in the interests of national security. Does this sound familiar?

Mayer warns that we must resist the end in the beginning, but that to do this we must know the end.

How many of us are aware of the steady erosion of protections and rights that may be occurring by stealth under this Government?

While there may be dispute about the exact wording and a criticism of Neimoller’s initial support for Nazism, who amongst us cannot feel a frisson of recognition. We are often silent at the plight of others and the injustice served on them.

There are various levels of knowing and not knowing. We may be genuinely unaware, or ignorant, or preoccupied with our own needs, or not informed of a crucial detail. We may conveniently swallow lies when the truth would be confronting or uncomfortable. We may not want to know, so we convince ourselves that something is not happening. As extreme brutality sets in we become fearful for our lives if we intervene. Then we must keep the secrets.

The fear and compliance extracted under a brutal dictatorship is depicted in the brilliant novel by Marcus Zusak, now a film: ‘The Book Thief’. It has been based on the stories told to Markus by his parents, around the dining room table, of living under  Hitler in Nazi Germany. As a child of parents who fled the Holocaust, I too heard many stories about why people flee and those who didn’t want to believe ‘it would be so bad’.

But due to the refugees, being hastily shipped out to offshore endless detention, or pushed back to Indonesian waters or shot at, we are not getting many stories of the ‘boat people’ Except from the Jakarta Globe, and other Indonesian sources and news media, we are not getting the human stories that will foster and promote our own humanity.

It is therefore much easier for the Abbott Government to depersonalise refugees and thus to encourage the populace at large to demonize them.

They have repeatedly been referred to as not waiting their turn and as being ‘economic refugees’.

In a recent survey, a staggering 60 per cent of Australasians want the refugees to be treated more harshly as many do not believe that they are real refugees!

And if you think it’s a big stretch, or long bow, to play the fascist card, consider the following:

But the enormous moral question is: if we stop the boats are we stopping persecuted people from flight and endangering their lives?

The 1951 UN Refugee Convention was framed to avoid the very circumstance of return to a dangerous destination.

Jews attempting to flee Germany in 1938 were denied refuge and sent back to Europe at the risk of death. The St Louis, an ocean liner filled with refugees, was denied landing rights in Cuba and America and eventually the captain had to reluctantly turn back to Europe.

‘… await their turns on the waiting list, [which incidentally was years long], and qualify for and obtain immigration visas before they may be admissible into the United States.’

Does that sound familiar?

The common refrain of many Germans after the Second World War was: “we didn’t know”. Or the famous Nuremberg defense, of “we were just following orders”.

When the concentration camps were liberated, some of the local German people were made to help with the mass burial of bodies or to file past the corpses and thus to confront the truth and reality of their nation and the leader they were deemed to have supported. In the movie Band of Brothers, the reality of the trauma of seeing the truth before ones eyes is conveyed without extreme narration. The shock and trauma of the liberators has been dramatically depicted and made less stark. But years later, liberators and prisoners can recall the exact details ‒ smells and sights ‒ which is a mark of severe trauma.

We are all diminished by the violation of humanity, whether we are silently complicit, choose not to know as citizens, or fail to inform and disclose the truth as the media or the Government.

For those who say, it’s too complicated and I don’t have time for politics, they leave their own rights and the freedoms of all unguarded. It seems many would pay more attention to buying a car, or house insurance, or a trip, than in selecting a Government.

We could aspire to be more like the Danes, who saved most of their 7,000 or so Jews. So, how were the Jews of Denmark saved, when they were readily rounded up in other parts of Europe? When other countries such as France’s Vichy regime literally handed Jews over for deportation. Why did the Danes embark on non-collaboration with the Nazis in the rounding up of the Jews for Deportation? Is there a lesson to be learned here.

This question is examined by Bo Lidegaard in his book Countrymen.

He concludes that for the Danes there was no us and them — there was just us. 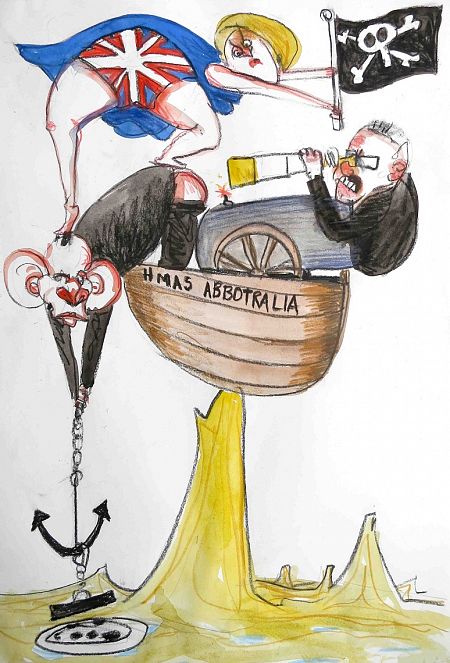