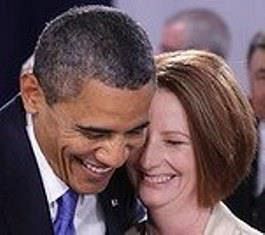 Julia Gillard has said much of how reforms the Rudd Government “languished”. Has everyone forgotten that every piece of legislation had to be endorsed by the Coalition, Barnaby Joyce or Steve Fielding to pass into law?

Julia Gillard has only managed to deliver Labor's policies once it was clear that support in a new "Green" Senate became inevitable.

At the 2010 election, Mark Latham advised people that, given the choice between Julia Gillard and Tony Abbott and unable to cast a "Langer Vote", voters should cast a blank ballot paper. Many did.

With 20-20 hindsight, I can see what he was getting at. On the 24 May 2010, Australia expelled an Israeli Diplomat for supplying real Australian Identities to create false Australian passports for Mossad assassins. On June 4, President Obama called off his visit to Australia, which had been scheduled for June 20. And then, on June 24, a well-orchestrated coup d’état rolled Kevin Rudd and installed Julia Gillard.

Of course, we are assured all of these events are just a coincidence — I am sure Julia Gillard's condemnation of Julian Assange on December 2 is not.