At a time where labour shortages are causing headaches for businesses, migration levels remain much lower than pre-pandemic levels, writes Dr Abul Rizvi.

WITH INTERNATIONAL borders now open for almost six months, there are new patterns of people movements (both long-term and short-term) emerging that will have longer-term implications.

While aggregate movements have steadily increased, we are still a long way from pre-pandemic levels.

The capacity of the Department of Home Affairs (DHA) and Australian Border Force (ABF) to efficiently manage international people movements as we return to pre-pandemic levels must be in considerable doubt. It is reasonable to expect massive further gridlock in the visa system and at our major airports over the next six to 12 months at least. That will be exacerbated by the huge budget cuts that were baked into those two agencies in the March 2022 Budget.

Given the dire situation of the Commonwealth Budget, there must be considerable doubt whether much of this can be rectified in the October 2022 Budget alone. The challenges are huge and will take years to address.

The opening of international borders has accelerated the movement of Australian citizens in particular.

Total net Australian citizen movements since November have been negative 181,470, with particularly large negative movements in March (negative 26,940), April (negative 70,550) and May (negative 46,220).

The movement of NZ citizens is returning more quickly.

The net movement of NZ citizens over the past 5 months has been a positive 7,790. These are also likely to be mainly people on holidays. Long-term and permanent movement of NZ citizens to Australia is likely to remain subdued given the much lower unemployment rate in NZ (3.2% compared to 3.9%) and much higher participation rate (71% compared to 66%).

Movement of Chinese citizens has been particularly slow to return. This is likely a mixture of ongoing covid restrictions in China as well as diplomatic tensions.

The net increase in the movement of Chinese citizens in February 2022 was mainly the arrival of students starting the 2022 academic year. There has been little to no return of Chinese tourists. 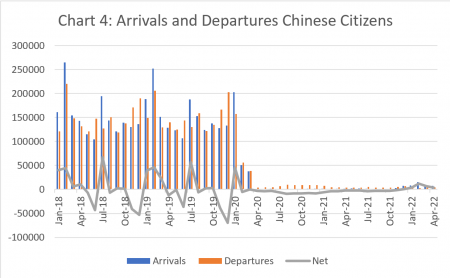 By contrast, the movement of Indian citizens has returned very rapidly.

With Nepal now our leading source of overseas students, the movement of Nepalese citizens is almost up to pre-pandemic levels and will likely exceed this in the next few months.

The total net movement of Nepalese citizens since December 2021 was a positive 21,800.

The war in Ukraine and the Australian Government’s response to facilitating visitor visas for Ukrainian nationals has seen a sharp increase in the arrival of Ukrainian citizens to levels well above anything we have seen in recent years.

Surprisingly, there was also a negative movement of skilled permanent residents in April 2022. Overall, since December 2021, the net movement of skilled permanent residents has been a positive 5,600. This is likely to rise over the next six months as the balance of the migration program shifts offshore and there is a 30,000 expansion of the skill stream even if the overall program is held at 160,000.

The movement of permanent family migrants is also around half of pre-pandemic levels.

The net movement of permanent family migrants since December 2021 a was positive 190. Given the likely smaller family stream in 2022-23, this is likely to increase only very gradually.

Movement of humanitarian and other permanent migrants

The steady increase in movements in this category is likely dominated by resident return visa holders visiting family overseas.

Re-opening of international travel was eagerly anticipated by the International Education industry.

We are likely to see a significant increase in arrivals in June 2022 ahead of the next semester.

The movement of skilled temporary entrants, given the state of the labour market, remains relatively subdued. This is likely the combined effect of poor visa design and slow visa processing. Addressing this will need to be a priority for the new Government.

The movement of visitor visa holders appears to be returning particularly slowly.

This will partly be because tourists from China, our biggest source country for international visitors, is still heavily restricted. Visa processing gridlock in the Department of Home Affairs will also be contributing. We may not see a substantial increase in visitor visa arrivals until December 2022.

At the end of May 2022, international movements had recovered only partially and remain a long way from pre-pandemic levels. This is creating labour shortages at a time there is still very substantial fiscal and monetary stimulus in the economy.

A key issue will be the extent to which the growing level of people movements in 2022-23 contributes to the rapid increase in net migration forecast by Treasury. This should be assisted by a rapid increase in overseas students, increasing reliance on Pacific Island farm workers, a shift in the balance of the migration program towards offshore visa grants and a larger humanitarian program.

The gradual withdrawal of fiscal and monetary stimulus is likely to coincide with a return towards more pre-pandemic levels of people movement.

There is a risk that a sharp slowdown in economic growth would result in newly arrived migrants finding it difficult to secure employment, noting these migrants face a four-year wait to access social support.

This would be another issue for the new Government to juggle.