It has been another dismal year for Australia’s economy despite the global boom continuing apace. Alan Austin reviews the year just ended.

The year 2019 has been excellent for most economies, both developed and developing. Although President Donald Trump is exaggerating mightily when he claims the U.S. economy is now the ‘best in U.S. history’, the global tailwinds have pushed his economy and most others along nicely.

Exceptions include Venezuela, North Korea, Bolivia — and Australia. We now have considerable data to assess how well – or how poorly – Australia fared through 2019. (Data sources are linked. Where we don’t have December data, we've used November’s.)

That compares with 911,300 before this Government came to office. That was too high then, but this has now surged by almost a quarter.

Seniors forced back to work

The unemployment rate actually rose through 2019 from 5.01% to 5.07%. That’s not much, but it happened while other countries created jobs at a rapid clip. 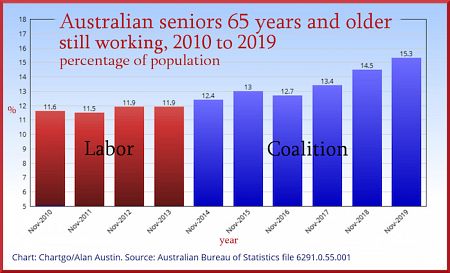 Total retail turnover in Australia, including online sales, reached just $328,891 million in the 12 months to November. This sounds a lot but is an increase over 2018 of a puny 2.74%, one of the lowest annual rises on record. Growth over the last three years has averaged 2.82%, which is the lowest ever by a fair margin.

With inflation at 1.7% and population growth at 1.6%, the retail sector is now in recession — going backwards year on year in real terms per capita.

Australia has been a beneficiary of the trade wars with China increasing exports to and imports from Australia. Thanks to former Prime Minister Malcolm Turnbull, who apparently impressed the erratic U.S. President, Australia has escaped trade sanctions.

Hence exports have risen strongly in recent years, including 2019, during which new records were set five times. 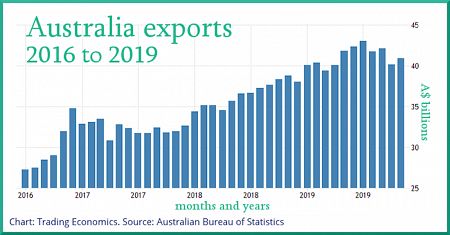 Overall trade – exports minus imports – has been in healthy surplus for the last three years, reaching new all-time highs three times in 2019.

The fact that Australia has benefitted so greatly from the current international boom in trade, investment, jobs, wages and government revenue makes the failures of its domestic economic policy all the more bizarre and disgraceful.

The total number of residential dwellings – houses and apartments – built in the 12 months to November 2019 was just 172,626. That is 43,250 fewer than the year before, a decline of more than 20%. This is the fourth straight year of declining construction. 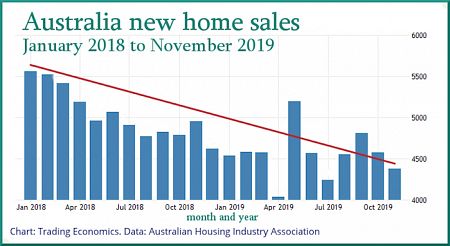 Since World War II, the value of housing loans available has increased every year. This has enabled most Australians to realise their dreams of homeownership and comfort in retirement.

Under this Coalition Government, the increases have fallen to the lowest on record, despite the worldwide growth in incomes, investment and homeownership.

Even through the global financial crisis the lowest rate of growth in home loans was 4.4%. That was in early 2013, as the world began to recover from the crisis. This gradually lifted, reaching 4.9% in September 2013, when Labor lost office. It continued to rise thereafter, peaking at 7.5% in late 2015.

Then in 2016, as the Coalition’s pro-big business policies took full effect, this began to tumble. By February 2019 it hit 4.2%, the lowest since this Reserve Bank file started in 1977 [RBA D1, column C]. It has now fallen for 20 straight months, plummeting to a disastrous 2.9% in November.

Personal debt, including maxed-out credit cards and payday loans, increased alarmingly in 2019. Personal credit in November [RBA Table D2] was a staggering 166.7 billion. That’s up $18.3 billion, or 12.4% over November 2018. 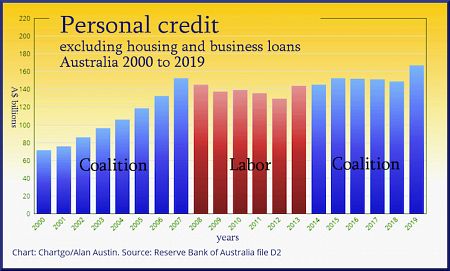 The budget deficit in November was -$13,848 million. That compares with -$12,497 in November 2018 and -$690 million at the end of the last financial year. A surplus next June seems improbable unless there is an extraordinary surge in revenue or – more likely – massive cuts to programs.

Net worth deteriorated from a record -$425.7 billion to a new low of -$559.8 billion over the year to November. This is by far the worst annual deterioration in history. Even throughout the global financial crisis, the declines were not this bad. In 2013, Labor’s last year, net worth increased by $43.2 billion. That this is still declining today during the international recovery is appalling.

Value of the Aussie dollar

Australia’s Reserve Bank tracks the value of the Aussie dollar against 19 currencies every day. These are the main global currencies, Australia’s major trade currencies plus near neighbours.

The Aussie fell against 18 of these through 2019, some of them quite disastrously, impoverishing all Australians. The South Korean Won was the only exception, where parity was maintained.

Calendar 2019 proves yet again that the Coalition is simply not capable of delivering the economic outcomes achieved by earlier administrations or in comparable countries today. Most economists and other independent observers know this. Thanks to systematic distortions and outright lies by the Coalition parties and the mainstream media, most voters do not know this.