Asia must follow Japan in fighting against Chinese regional aggression

With China's political aggression rising, Japan has sided with those standing up to the economic superpower and setting an example among Asian nations, writes Minho Lee.

OVER THE PAST DECADE, China has expanded its campaign of aggression, causing nations in the Asia-Pacific region and beyond to band together to promote economic and political security. Typically, Japan has refrained from publicly opposing China, especially while the country was under the leadership of former Japanese Prime Minister Shinzo Abe.

However, after a recent U.S.-Japan summit, Japan joined the United States in voicing opposition to China, marking a notable shift in the country's foreign policy agenda, aligning the East Asian nation with others like Australia, India and the United States. Given the destabilising power China's expansionist policies are having, more countries must join this effort to safeguard the region's economic, political, and security infrastructure.

Japan and China share centuries of cultural and trade history that have influenced the two nations' contemporary relations. As China transformed from a developing economy into a global superpower, Japan has managed to carefully approach bilateral relations with China while maintaining positive ties with the U.S. However, the two regional powers have had their fair share of disputes, including long-standing historical issues and concerns surrounding China's expansion in the South China Sea. 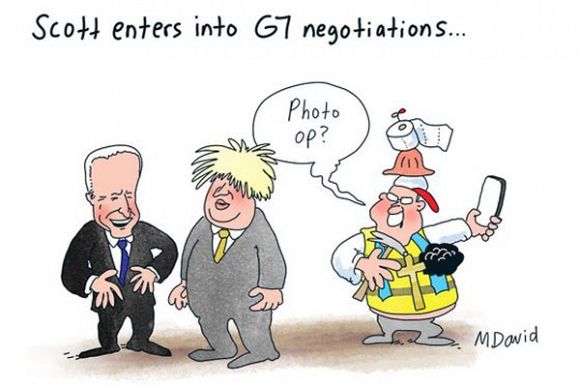 The meetings of the G7 and NATO have left no doubt as to the growing strength of a united front that is being built to reduce China’s influence in the world.

During his presidency, former Prime Minister Abe noted that both Japan and China had a shared responsibility to ensure peace and prosperity in the region and worldwide. Despite ongoing tensions, Abe shared that he was committed to building and furthering Japan-China relations. In fact, when the COVID-19 pandemic first hit and many countries began shutting out Chinese travellers, Abe was reluctant to ban visitors from China because of the foreign policy implications it would have.

However, Japan has recently established a new position regarding China. In April, Japanese Prime Minister Yoshihide Suga and U.S. President Joe Biden released a statement after the two met in Washington. The statement emphasised the importance of the U.S.-Japan alliance for ‘peace and security’ in the Indo-Pacific and cast China in a negative light. The statement is notable as it is the first time Japanese and American leaders have mentioned Taiwan in a joint statement since 1969. It touches on internal Chinese affairs, including China's policies on Taiwan, Hong Kong and Xinjiang.

This shift comes as China ramps up its policy of geopolitical aggression. One of the most well-known geopolitical conflicts that feature China is in the South China Sea. China considers the South China Sea a critical component of its maritime territory and an essential part of its Maritime Silk Road, part of China's Belt and Road Initiative. However, China's expansion in the South China Sea has fuelled tensions with other nations, which also claim territory in the disputed region, including Taiwan, Brunei, Malaysia and the Philippines. China has also sparked tensions in the Taiwan Strait by increasing a military presence in the area.

China has also engaged in numerous territorial disputes with regional neighbours like India. In January, India and China decided to build infrastructure along the border in the Himalayan region, resulting in numerous fatalities. China has also imposed a series of economically coercive measures against countries that have implemented policies that undermine Chinese interests. For example, in 2010, China blocked salmon imports from Norway after the Nobel Committee awarded the Peace Prize to Liu Xiaobo, a renowned Chinese human rights activist.

More recently, China disrupted the flow of Australian products such as coal, beef, copper, cotton, sugar and wine after Australia prohibited Chinese companies, Huawei and ZTE, from participating in the development of its 5G network. Prime Minister Scott Morrison accused China of interfering in Australia's domestic affairs, calling for an independent inquiry into the COVID-19 pandemic. In early May, China indefinitely halted ongoing economic talks with Australia, expanding diplomatic tensions.

Japan's latest shift marks the country's desire to align itself with those seeking to protect the status quo which is currently under threat by Chinese aggression. On 9 June, Japan expressed support for Australia's campaign against China's policy of economic coercion, claiming that China's moves have jeopardised the state of international order. As Japan, Australia, India and the United States strengthen their efforts to undermine China's growing power, they are calling on other Asian nations to follow Japan's lead. The allies flagged China's economic and geopolitical aggression as a threat, which is set to destabilise other economies in the region.

In order to safeguard regional economies and security infrastructure, it is essential for governments to take a firm stance against China much like what Japan, Australia, India and the U.S. have done. As Chinese aggression threatens to undermine democratic markets, it is imperative that Asian nations follow Japan’s footsteps and take action before it is too late.

Minho Lee is a political and economic analyst specialising in the Asia-Pacific and Southeast Asia.

Asia must follow Japan in fighting against Chinese regional aggression

19 June 2021, 4:30pm With China's political aggression rising, Japan has sided with those standing up to ...
Join the conversation
comments powered by Disqus
News updates