By Ross Jones | 26 June 2013, 10:33am | comments |
James Ashby complains he never got the chance to tell his side of the story in court, but professional investigator Ross Jones suggests that this argument looks like smoke and mirrors.

THIS JAMES ASHBY leave to appeal verdict is certainly taking its time.

While Their Honours consider their position, we too can pause to reflect.

There’s been a fair bit of noise from LNP mouthpieces that James Ashby was denied his opportunity to put forward his substantial case — that is, that he was sexually harassed.

Maybe, but it must be remembered that it was he who chose the path leastlikely to have the substance of his allegations tested.

And possibly for a very good reason.

The Originating Application, filed by Harmer’s deep into the afternoon of Friday 20 April 2012 (the Daily Telegraph story came out at 1am on Saturday 21 April 2012) alleges:

Excerpt from the Originating claim

Fine. These kind of allegations are made every day across a wide range of workplaces and they keep a lot of workers compensation investigators happily employed (if you like that kind of thing).

One of the first things any workers comp insurer wants to know is: when was the report of injury made?

If the claimant wants a successful workers comp claim, then the less time between the alleged harassment and its reporting the better. If someone makes a lunge for you at work and you don’t like it, report it straight away.

And for god’s sake don’t submit a retrospective medical certificate. The one proffered by James in evidence certified he is unfit to work from 24 April to 12 June 2012. The problem is: it is dated 16 May 2012. It just says he has "a significant medical condition": 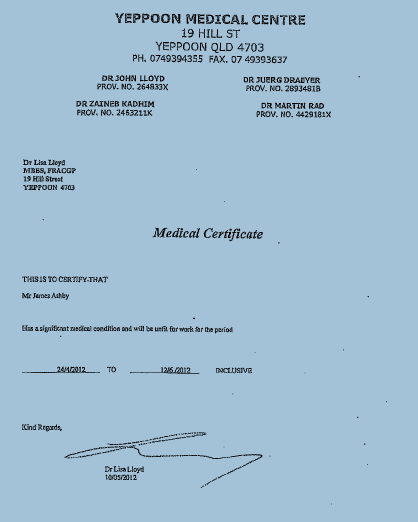 Responsible employers have written policies and procedures in place and staff are obliged to adhere to these. Depending on the nature of the allegations and the available evidence, the matter might be dealt with by a simple mediation between the supervisor and the party or parties involved, or it might be escalated to a formal complaint.

And major organisations also have established procedures to deal fairly with formal complaints.

The Commonwealth is no different; the "First Respondent" has its procedures.

‘You shall be employed as a Personal Employee under Part 111 of the members of Parliament (Staff) Act 1984.' 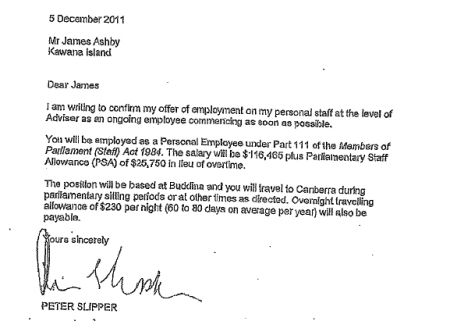 Was a good salary all of James’ motive for accepting?

We shall see. We understand one of the first things James did after accepting the offer was duck out and buy a Golf with tinted windows and 'ASHBY' number plates.

The MOP(S) literature, which I imagine James was required to read ‒ as he had accepted position which fell under the Act, and all evidence suggests James is a highly capable, intelligent man ‒ states:

‘To comply with the Commonwealth legislation, Senators and Members must provide a safe and healthy work environment, free from bullying, harassment and workplace violence, for Members Of Parliament (Staff Act) 1984 (MOP(S) Act) employees.'

'Sexual harassment is unwelcome advances, requests for sexual favours and other verbal or physical contact of a sexual nature, when submission to or rejection of this conduct explicitly or implicitly affects a person’s employment, unreasonably interferes with a person’s work, or creates an intimidating, hostile or offensive working environment.'

It then lays out a clear procedure for dealing with complaints, and pays special attention to formal complaints:

First, put it in writing.

Second, a meeting with the relevant parties with the complainant present.

If all else fails, call in the Cert IV government investigators:

‘Should the MOPS(S) Act employee making the complaint not be satisfied with the outcomes of the meeting, an investigation as set out in the Code of Practice may be undertaken.'


But James did none of this.

To hell with his obligations under the employment contract, which he accepted; it seems he took it on himself to inform a few LNP figurines, before breathlessly spilling the beans to Big Mal Brough himself who referred him to a lawyer who…

That, as they say, is not cricket.

After Rares, J. threw out Ashby’s Fair Work application in December last year, Ashby’s legal Michael Lee appealed that it was Justice Rares’ and Peter Slipper’s fault the substantive case was not heard. Rares and Slipper should have called Ashby to the stand, argued Lee. Hear the facts!

However, as we have seen here, if Ashby had picked a course most neatly designed to avoid scrutiny of the facts, he couldn't have chosen a better path.

But, then again, maybe he had a very good reason to do so...

If you would like to assist The Ashbygate Trust's dedicated Ashbygate investigation, got to ashbygate.com.au and pledge your support.