Slippery James Ashby vs Burston the bloody Beagle: The Clash of the Tits

A Minerals Council dinner at Parliament House. ScoMo is there, as are lots of extractive industry luminaries, all dressed to the nines.

Everyone is pretty relaxed by the time three courses are finished.

Except James Ashby. He’s wound up like a two bob watch.

One Nation turncoat Burston is there too and, by the time the doors opened, he’d had a great night. Very cheery.

The 71-year-old Burston, wife in tow, was about to exit via Parliament House’s impressive marble foyer when the 40-year-old James turned to his dining companion and said something like "hold my beer".

The rest is history, splashed all over the media.

The mainstream media have also been pumping the story with most of the documented Ashby disruption activities, such hurling Margaret Menzel's phone at her leg, tossing a Sunshine Coast Daily journo’s phone into the bushes, getting a good behavior bond for threatening to kill a perfectly innocent person and trying, ultimately unsuccessfully, to stick it to his ex-boss, former Speaker Peter Slipper.

Who, by the way, should be affording himself a wry smile and a quality Scotch right about now.

The media have been a little fuzzier when it comes to Burston’s past. That’s mostly because he is an opportunistic nobody.

IA, though, got a call from one of Burston’s old schoolmates — if mate is the right word.

This mate explained Burston had a brother at school – yes there were two of them – and both wore black-rimed glasses. They were known collectively as the Beagle Boys.

Apparently, in certain circles, Burston is still known as "the Beagle".

The mate reckons the boys liked to fight but IA doesn’t know this for a fact. Seems plausible.

One of the shots of the Parliament House fight, taken by, as IA understands, a photographer from The Australian, shows Beagle in a very well-balanced stance given the circumstances.

On the subject of visual evidence, the only possible conclusion to draw is that Ashby released his phone content to the media.

.@barriecassidy: "I can recall a lot of late night drinking parties in the '80s when I first went to Canberra, but I can't recall fights breaking out!"

Barrie says both James Ashby and Brian Burston have a problem on their hands #auspol pic.twitter.com/ngqtYnUwnR

Why would he do this?

I don’t know. But I can guess.

It is in his DNA.

And another thing. What happened after the fight?

Back to picture this.

The Great Hall. Ashby has thrust his phone into the face of Beagle’s poor wife. Beagle, with a few adept steps, has wrested the phone from the younger man and hurled it to the marble. Cut his hand somehow. A little shovey contretemps ensues.

Beagle, perhaps blinded with rage, or something, made his way to Hanson’s office and smeared her door with blood from his cut hand. He then pretended he hadn’t done this until he remembered he had. Or someone reminded him the place was riddled with CCTV.

Then someone else, presumably with at least St John’s first aid, bandaged his hand for the camera.

Extraordinary scenes in Canberra, as Brian Burston gets into a physical altercation with James Ashby #auspol https://t.co/lLmQ6cpoZ6 pic.twitter.com/Dz22oFYffJ

It seems James then just pissed off and got the earliest flight back to Brisbane.

Not long before the soirée, James’ boss Pauline had told the Senate one of them was a groper.

Beagle leapt to the conclusion she was referring to him and took umbrage. Anyway, he said, she once ran her hand up my spine and did other stuff. She is the sexual harasser.

He also hates Beagle — and maybe rightly so.

Beagle turned out to be a Malcolm Turnbull fan on tax and that was a step too far for James. He cut Beagle adrift where he ultimately washed up on the shore of lake Clive Palmer.

Clive and Beagle made a deal. If Beagle signed up, Palmer could get his United Australia Party accredited as a political party without the boring necessity of signing up 500 members.

In return, Clive had the bucks to fund Beagle’s looming war against Ashby.

Beagle has hated Ashby ever since Hanson’s pet denied his pre-selection on the Senate ticket in favour of that moron, Malcolm Roberts.

First the burka, now blood smeared on the door. Just what is Pauline Hanson trying to tell her tribe of follower? I expect Malcolm Roberts will be challenging Brian Burston to a duel to restore Pauline's 'honour.' #PaperDoll he calls his own. #auspol #Straya #Senateshenanigans. pic.twitter.com/GVhiwUyJBG

We are yet to see this war fully unfold — but it has definitely started.

In a bit of notable irony, back in 2013 Clive tried to enlist the then member for Fisher Peter Slipper as a PUP member for the same reason. In that case, Slipper baulked and Clive, who was on a relative roll, managed to sign up PUP’s 500th member just before the deadline.

That is unlikely this time around, what with Queensland Nickel and all, so Burston is pure gold to Clive.

Member’s staff are employed under the Members of Parliament Staff ACT known as MOP(S).

'... take reasonable care that his or her acts or omissions do not adversely affect the health and safety of other persons.'

MAPS makes it clear that

'It is expected that everyone in the workplace will behave in a professional manner, and treat each other with dignity and respect.'

'Harassment generally involves unwelcome behaviour that intimidates, offends or humiliates a person Sydney bureau chief Ross Jones is a licensed private enquiry agent the author of 'Ashbygate: The Plot to Destroy Australia's Speaker'. You can follow Ross on Twitter @RPZJones.because of a particular personal characteristic such as age, race, gender, disability, religion or sexuality.'

It is possible for a person to be bullied, harassed and discriminated against at the same time. However, unlike workplace bullying, discrimination and harassment may be single incidents and are based on some characteristic, or perceived characteristic of the affected person.

Burning question that should, and hasn't been asked by media, is why James Ashby was not summarily dismissed from public payroll. Refer 'Commonwealth Members of Parliament Staff Enterprise Agreement 2016-2019'
['s63.4 Where an employee is guilty of serious misconduct...']#auspol pic.twitter.com/tQAvNLCLsd

Ashby was in clear breach of the Act when he stuck his phone in the Burston’s faces.

"Teflon" Jim has gotten away with similar behaviours in the past but, with the exception of his good behaviour bond, being booted from Parliament House is the first time he has come unstuck..

The Senate doesn’t sit again until 2 April and then there are only seven sitting days that month.

James has a telephone is free to phone a friend to offer advice.

Not long afterwards, there will be a Federal election.

With a bit of luck, the new Labor Speaker will make the ban permanent.

Sydney bureau chief Ross Jones is a licensed private enquiry agent the author of 'Ashbygate: The Plot to Destroy Australia's Speaker'. You can follow Ross on Twitter @RPZJones. 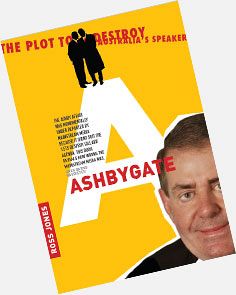 I have exercised my authority to revoke Mr James Ashby of his pass to access the building.