PHONE A FRIEND: Ashby Culleton feud throws One Nation white off the rails

When One Nation staff don't immediately jump at James Ashby's every notion, he chucks a tantrum — and sometimes more than that. Ashbygate author and Sydney bureau chief Ross Jones looks at James Ashby's phone record. 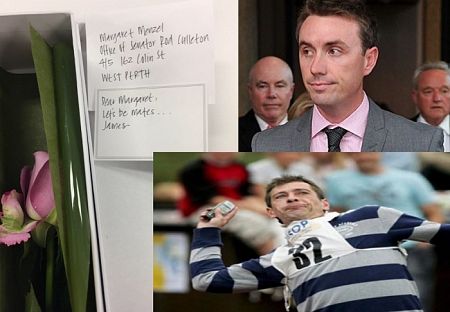 THINGS ARE a little tense inside One Nation.

You’d think a week which saw American gun-toting evangelicals a hootin’ and a hollerin’ over the elevation of a narcissistic psychopath to POTUS-elect, a week in which every two-bit Australian politician reached for a far-right sound-bite, a week in which our own little fake Aussie battler breathlessly told the POTUS-elect her "door was always open" and a week of self-righteous bragging would be a pretty good one for the Nasty Wedge party.

When you look at Bill Shorten's recent rhetoric it seems Labor is now taking its cues from Pauline Hanson's One Nation. Good to see #auspol

Stuff has, apparently, gone off the rails.

Stuff has a name and it's name is Rodney Culleton.

It is arguable, of course, that Rodney was never entirely on the rails, but there is no doubt he has now completely parted company with the broad standard gauge.

The problem is not so much that Rodney is a dill, or even barking mad, it is that James can’t control him. And James likes to control stuff.

James is used to dealing with some pretty weird people, think Christopher Pyne or Malcolm Roberts, but trying to deal with a person who wants to represent himself before the High Court wearing sheep belly fleece on his head takes things to a whole new level.

Oh Lord, Rod Culleton has kept his High Court promise - to "shear a sheep, take the fleece, stick it over my head and represent myself" pic.twitter.com/A9zWw3rP23

Both Stuff and Ashby are temperamental petals.

And therein lies the problem.

When Stuff does not get his rightful way, he reacts with childish pettiness:

"As I've had my back turned, he's jumped in my truck and grabbed the key!”

The Tamworth tow truck driver and the $7.50 key that could bring down senator Rod Culleton
It was a cool, clear... https://t.co/VqVDJUJjGE

A tantrum in other words. Nyah nyah! I’ve got your ke-e-y!

But when James feels thwarted, he reaches for a phone and throws it.

When Jacques, who had been filming on his mobile phone, started asking expense questions of Slipper, Doane manfully stepped in and ushered Slipper away, jamming a folder over the lens of a TV camera as she did so. At that moment Slipper, to his subsequent relief, had his back to Ashby.

Jacques alleges Ashby then grabbed his phone, threw it into the grass and said, ‘Go get it Owen’.

(Excerpt from Ashbygate: The Plot to Destroy Australia's Speaker)

Nyah nyah! I chucked your pho-ne!

An honour and a pleasure to be in @James_Jeffrey's Strewth column where James Ashby is described as the "Orville Wright of telephony". pic.twitter.com/8zYhLqTiyW

So, anyway, just a couple of days before the love-child of Jimmy Hannon and Benito Mussolini became POTUS-elect, Pauline and James had thrown Stuff under the High Court bus over his probable ineligibility to have a parliamentary office in the first place.

Understandably, Stuff was not happy and went all sulky and non-compliant with head office KPIs.

Not good, because right now, with that lout Bernardi out of the country rooting, One Nation was the media’s go-to source for mad people’s opinions on other mad people.

A PR bonanza, if played right.

Then along came Stuff, or, more accurately, Stuff’s able assistant Margaret Menzel, who describes herself as an "old chick". But she is dead loyal to Stuff.

It is the morning of Wednesday 7 November, only a few hours before POTUS-elect caused the #calexit hashtag to take off, the scene is Stuff’s office in Parliament House.

He is on his version of a warpath, demanding to know why Stuff is not following HO orders regarding Facebook KPIs.

Stuff is out, but warrior Margaret is in.

Ms Menzel is not as overawed by Ashby as some. She told him to put in in writing.

'According to Ms Menzel, the ensuing argument became personal and repetitive, until Mr Ashby “completely lost the plot” and threw the phone in her direction.'

Margaret immediately dobbed James into "parliamentary officials" for bullying, then someone – maybe even Stuff himself – called the media and let the cat out of the bag.

Here's your statement - thoughts??: I did accidentally bump into Owen as the ground was quite uneven, at which time he seems to have thrown his iPhone. I was surprised and said, " Go Get it Owen" then walked to the car as we were late for another appointment. In fact, as we drove away, Owen and I waved at each other. This seems to be yet another fabrication by the SCD tabloid to create something out of nothing. I have apologized to Owen for bumping into him but I did not throw his phone.

(Excerpt from Ashbygate: The Plot to Destroy Australia's Speaker)

This time it was Pauline herself who fronted the media.

She tried to laugh dismissively, while telling the nation:

He is accused of something. He was underhand throwing. It was completely blown out of proportion.

It was an underhand throw. That is the news of the day, heaven help us, how my advisor threw his phone underhanded.

How pathetic it is, if you want to talk about something else, but if this is more important to the nation, go ahead.

So Pauline would have us believe James tossed his phone underarm, sort of like boules.

But that’s not how Margaret remembers it.

You can watch here version here:

“He threw the phone directly at me and I moved, quickly. It hit very hard on the carpet just behind where I had been."

When used as a star-knife an iPhone can do a fair bit of damage to an unprotected shin and Margaret is lucky she still has her agility.

IA tried to contact Margaret and made several calls over several days to Stuff’s electorate and Parliamentary offices, but on each occasion the phones rang out.

The lid is down.

That Ashby – a man who attempted (and largely succeeded) to subvert Australian democracy, a man who abused the Federal Court, a man who caused irreparable damage to a Commonwealth official, a man who pulled off an insurance fraud against the Commonwealth – is allowed free access to Parliament House is an abomination.

He should be in gaol.

But he has protectors in high places.

This week, Ashby had a meeting with LNP former Queensland Premier Campbell Newman.

“The next [Queensland] government is going to be needing the support of One Nation to govern and my humble opinion – and I’m not going to reveal confidences – is that I think that the price for One Nation support will be power.”

But power for whom?

Campbell Newman says deal to form government between One Nation and LNP likely at next Qld election #qldpol https://t.co/MD7ZOnbShx