James Ashby has dropped his case against former Speaker Peter Slipper — but what does it all mean. The Ashbygate Trust investigates.

So off into the sunset rides James Ashby.

In a disingenuous pile of slop masquerading as a press release, James said:

‘After deep reflection and consultation with those close to me, I now have decided to seek leave to discontinue my Federal Court action against Peter Slipper. This has been an intense and emotionally draining time for me and my family, taking its toll on us all.’

The simple fact is he was on a hiding to nothing.

To prove sexual harassment against the former Speaker, Ashby’s lawyers Harmers needed to show, firstly, that the Speaker did indeed make at least one sexual advance to Ashby and, secondly, that any such advance was unwanted.

The Trust has pored over every document tendered by the prosecution, interviewed witnesses, obtained signed statements, met with Slipper, spoken with James and consulted three lots of lawyers.

We have searched long and hard, but we have found not one instance verifiable harassment. There are, however, lots of instances of verifiable lies.

'I have made this decision in light of several important considerations. Firstly, in the decision on my recent appeal, the Full Court of the Federal Court not only found in my favour by awarding my appeal, but also made significant findings in my favour regarding some of the most vital aspects of my claims. Fundamentally, that the harassment had in fact occurred.

'I am of course gratified by these new findings, which justify the action I took.'

This is complete crap.

In December 2012, Justices Rares threw the matter out as an abuse of process. 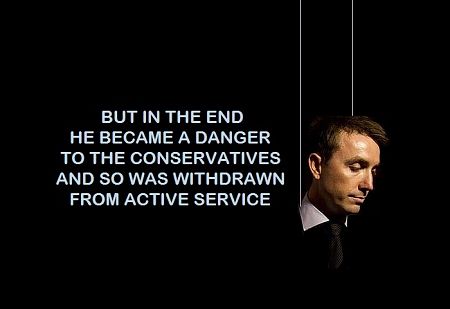 The appeal decision, handed down on 27 February 2014, was split 2:1. Justice Siopsis agreed with Rares’ decision and denied the appeal. The other two, Mansfield and Gilmour, thought Rares erred by not hearing the substantive case and testing Ashby’s allegations. Nowhere in the appeal decision is there a finding in Ashby’s favour apart from the granting of the appeal.

And now James has squibbed. No surprise there – he was always going to. Indeed, we predicted it in March.

Apart from having no case (that hasn’t stopped him before), the parade of witnesses would have been a godawful embarrassment to the LNP in all its various guises were Mal Brough, Bruce McIver, Mark McArdle, Christopher Pyne, David Russell QC, Warren Entsch et al were all to be given the chance to enlighten the court.

And Doane. The Weakest Link. She would have been fun. Sadly, for us, not to be it seems.

The omens weren’t good either. The new trial had been scheduled to commence under Justice Geoffrey Flick on 30 June 2014.

This is the same Flick who is on record as saying:

"Care should be exercised when making submissions to the Court not to make statements which were more in the nature of a 'media release' than a submission which provided genuine assistance to the Court ... and the interests of all parties protected."

'One of the key reasons I started this action was to stop Peter Slipper’s behaviour. I am confident this has been achieved.'

One of the key reasons, eh?

‘...tip the balance of power in favour of the LNP’. 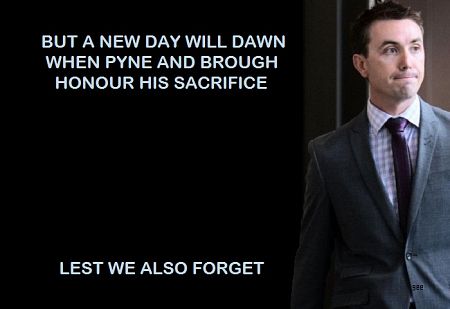 This paragraph is probably the most sick-making:

'I am also aware, through recent public reports, that Mr. Slipper has been mentally unwell. Under such circumstances, I do not wish to continue lengthy proceedings that could potentially cause him great harm.'

What can you say, apart from cry: “Oh! The hypocrisy!”

James then goes into a moan about the Commonwealth funding Slipper’s defence:

'If I succeed against Mr Slipper (as if), that win may result in another appeal which will only prolong closure for me, and increase costs. This type of ‘deep pocket’ litigation, where one side has unlimited money, from the taxpayers, makes it fundamentally unfair for an ordinary person seeking justice. Also, Peter Slipper has claimed in other legal proceedings that he has no funds. This will make it unlikely that he will pay any verdict or additional costs orders beyond his deal with the Commonwealth.'

Whoa! While the Trust agrees with James that prolonged closure can be uncomfortable, we can’t quite get our heads around James being an ‘ordinary person seeking justice’.

And the bit about Slipper not having funds? Well, that’s because he’s been bled dry.

James alleges the matter has cost Harmers’ over $1 million to date. How much over a million, he doesn’t say, but we hope it was heaps.

And spare a thought for poor old Anthony McClellan. He had Doane and Ashby signed up for $550 an hour, supposedly to be paid after they received damages. There’s a gravy train wasted. Maybe he got a bit of Harmers’ million, we hope so because it’s a tough world in PR land and a bloke needs a drink.

Is that it? All over? Move on folks, nothing more to see? Not quite.

The Trust is accelerating its efforts to see justice done. We can’t say much about this at the moment — maybe it will come to nothing?

We are also collating our material and intend to publish a comprehensive account of this sad saga. It will reveal material that never made it to the court, let alone the media.

It will fully expose the role of Mal Brough.

The working title is ‘Curiosity Killed the Rat’.