The appointment of a long-time friend to Rupert Murdoch as chair of the ACCC is dubious, given potential conflicts of interest, writes Joel Jenkins.

IT HAS BEEN a hard year for Australian workers — many have not experienced the security and good fortunes that have been bestowed on friends of the Federal Government.

In a country where press concentration is a close third to China and Egypt – where that undesirable podium finish is mostly due to the amalgamation and consolidation of media led by the dominant influence of Rupert Murdoch – Josh Frydenberg has appointed a new chair of the Australian Competition and Consumer Commission (ACCC), long-time Murdoch trust fund lawyer Gina Cass-Gottlieb.

The 2011 Egyptian uprising was not just a revolt against the dictatorship of Hosni Mubarak, but also a rebuke of the cronyism and corruption in the ruling class who had profited from its open support and exclusive access to the government.

Rami Makhlouf, the maternal cousin of President Bashar al-Assad and owner of the country’s largest telecommunications network, became a symbol of “connected capital” in the leadup to the Syrian uprising that would eventuate into one of the largest humanitarian catastrophes in recent memory.

From Riyadh to Rabat, the Arab world is more perceptive to the machinations of cronyism. Its private sector has generally been a vessel of the state, surviving and thriving within the petri-dish of a ruling class, generally despotic in nature. It seems to work a little bit differently in Australia. 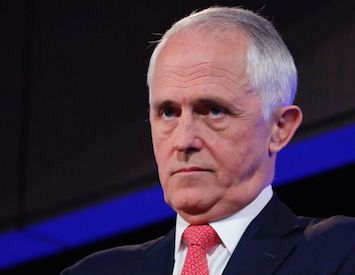 Hopes that political rorts might be curbed by a chastened PM after last year’s narrow election win have been dashed, reports Alan Austin.

Here, the government identifies with corporate leviathans, making vital political decisions that affect the entire nation at the whims of their desires and ambitions. Thus, satiating their threat to make or break our nation by offering their henchmen and enablers jobs as arbiters, chairs and commissioners over the engine rooms that drive the fundamentals of Australian life.

Allowing politically motivated appointments to stream unchecked into our regulators and institutions is leading to the sacrifice of impartiality and fairness in society, resulting in the degradation of our key institutions from within.

Gina Cass-Gottlieb, a person who for decades has managed the howling screams constrained within the labyrinth of the Murdoch family trust (a director and a 12.5 per cent stakeholder, and someone who served as Lachlan Murdoch’s personal lawyer), should not be permitted the chair of the independent consumer watchdog charged with reviewing matters pertaining to issues of consumer fairness — some of them, potential issues arising from the use of those trust funds she managed.

If there was an example of a long term strategic goal to be had in allowing a Murdoch fox into our consumer protection chook house, it was here — the Liberal National Party (LNP) sending a message that there is only one party truly committed to the Murdoch experience.

This appointment aligns with the Government/Murdoch opposition to the same issues Australians have with News Corp's unwieldy and concentrated influence — this time by social media and tech giants.

In a world where LNP electorates can be blatantly given 47 times more funding than neighbouring Labor seats, is it no surprise that the same behaviour is being carried out in Government appointments across key institutions, boards and government bodies, which regulate and ensure fairness across our society.

Among these appointees – adding to a couple of dozen employer background LNP appointees embedded into our Fair Work Commission – were our champions of the workers: former private lawyer, Sophie Mirabella and Alana Matheson, a corporate heavy and daughter of the former Liberal member for Macarthur, Russell Matheson.

Visited Ryco with Russell Matheson - invest in your business & the Turnbull Government will back you in #ausvoteshttps://t.co/kFEiVVns1N

The gig as Fair Work commissioners came with a $387,960-per-annum salary. In a year where sections of Australia are falling apart from financial duress and job insecurity, both roles were amazingly locked in for the exact amount of years until each turned 65.

In Mirabella's case that is in 2033, in Matheson’s case, 2047 (a couple of years before the dystopian setting of the Blade Runner sequel), so basically, commissioners for life. Of the five commissioners and ten of the deputy presidents of the Fair Work Commission, every single one of them was appointed just prior to, or during the period of this Morrison Government (2017-2021).

Senator Cash mentioned that the appointments to the industrial umpire were totally qualified. But, there's a former Liberal MP who since worked in government relations for Gina Rinehart (Mirabella). And the 15 years of combined job experience (Matheson) from the child of a friend of the LNP, who in her time at business management consulting firm KPMG helped 'support clients in a range of different contexts including workplace relations and enterprise bargaining strategies'. Both seem to only capture a small section of the workforce in their illustrious job histories — the employers. 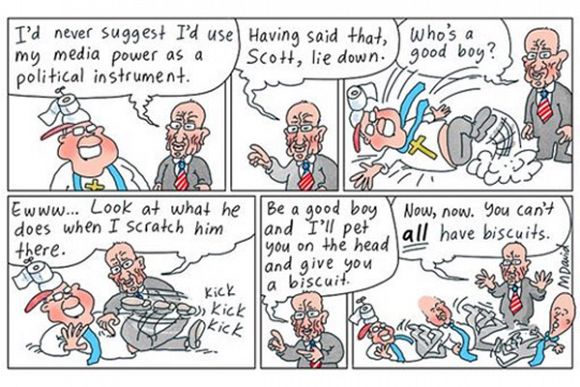 News Corp's political influence and power over the media is in need of regulation for maintaining journalistic integrity and democracy.

Where are the panels, processes and opportunities for the many highly qualified, non-political technocrats of this nation to rightfully prove their impartiality to make them more qualified for a role that lists impartiality as a key job requirement?

In all the argie-bargie and the handshakes, the “she'll-be-rights” and the “mateship”, undeniable cronyism is developing in lockstep with a corporate agenda in this great barren land.

An example of the conventional grey areas in this loosely amalgamed and increasingly ridiculed federation, exploits are available for all the governments that choose to use them, and this Government is bringing it back into vogue. The time-honoured tradition of getting your political mates high paying taxpayer-funded jobs – once only cheekily whispered – has become overt and disturbing under the Morrison Government and this iteration of the LNP.

What’s more impressive is how these appointments are happening so close to the end of an unpopular term of government, at odds with the nation across a broad range of issues, in a country still devastated from over three years of acute Murdoch misinformation and spin around the bushfires and the pandemic.

It's kind of like sowing landmines in the retreat from a murky battleground. A new government is faced with dozens of LNP-aligned commissioners, board representatives and appointees for life, strewn throughout our public institutions and regulatory bodies. This normalises the embedded over a decade of blatant “stacking”.  It takes a lot of time and money to reappoint lifetime government roles — it’s very hard to sack a public servant; we all know that old tale.

Why can politically motivated governments be allowed to reshuffle the fundamental regulatory and administrative architecture of our country to favour their political leanings? What are the major parties doing to ensure that they will not allow friends of political influence to arbitrate over the regulatory arms of our nation?

Why can't such roles be open to the best candidate, the most independent and the most detached from the political class? Surely, that would be one of the prerequisites for such vital independent roles?

We need qualified and engaged technocrats campaigning for representation in these vital roles — and governments that support them.

Australians must join them in rallying against and protesting at “jobs for mates” (the un-Australianness of it all) to ensure public scrutiny of appointments and to demand impartial and qualified people to contribute to these vital public roles that define Australia.

Any incoming government will have to deal with the consequences of nearly a decade of politically motivated appointments. How it chooses to approach this definitive situation will define the next era of Australian life.

This story was first published on Bogan Intelligentsia under the title, 'Jobs for mates for life'.