ASTONISHINGLY, Rupert Murdoch has received a prestigious Australia Day award. Well, it was prestigious until now. Henceforth, it could be an albatross of profound shame.

Fortunately, this was not one of the official Australia Day gongs announced by the Governor-General. It was given by a small London-based group which calls itself the Australia Day Foundation.

Despite being unofficial, it has generated controversy globally and requires a reasoned response. The reality is that it is hard to find a public figure anywhere whose lifetime achievements have been more destructive than Rupert Murdoch’s. That is based not on personal or political prejudice, but on the findings of courts of law, parliamentary inquiries and other established tribunals. Here are just twelve, selected from a much longer list.

The judge said that the “reporter” in question, Tucker Carlson:

‘was not stating actual facts … Given Mr Carlson’s reputation, any reasonable viewer arrive[s] with an appropriate amount of skepticism…’

In other words, nothing Carlson or Fox News says should ever be believed.

Murdoch’s Fox News was the leading outlet spreading false reports of U.S. election fraud after the November elections. But of 62 court challenges up to 6 January, 61 rejected the ridiculous fraud claims.

'in all the circumstances, a recklessly irresponsible piece of sensationalist journalism of the worst kind.'

False allegations recently run in Murdoch’s Australian newspapers included accusations in The Australian of fraud against the Bureau of Meteorology, claims in The Daily Telegraph that soldiers must not use words like “him” or “her” in case they offend and allegations in The Herald Sun that libraries were banning books.

That’s according to the Australian Press Council which found 62 per cent of all complaints upheld over the 21 months to last September were against Murdoch publications.

Britain’s media monitor, the Independent Press Standards Organisation, found last July that Murdoch’s The Times had distorted reports of a court judgment with 'serious and significant inaccuracies. This was compounded by a failure to correct the falsehoods promptly. Another adjudication found that a Sunday Times article in September falsely denigrated Black Lives Matter.

This 2011 investigation by London’s police discovered that Murdoch employees had illegally hacked the phones of hundreds of celebrities, politicians, royal family members, relatives of deceased soldiers, victims of the 2005 London bombings and murdered schoolgirl Milly Dowler.

This British judicial inquiry into Murdoch’s newspapers – called in 2011 by Prime Minister David Cameron – found a recklessness in running malicious stories, ‘almost irrespective of the harm that the stories may cause and the rights of those who would be affected’.

Rupert Murdoch himself admitted to the inquiry that News of the World had tried to cover-up the scale of the phone hacking.

A separate inquiry by the Culture, Media and Sport Select Committee of the UK House of Commons found extensive misconduct by Murdoch executives, including lying to the inquiry.

The May 2012 report found that Murdoch’s newspapers invent “news” with no factual basis and that stories which harm immigrants and asylum seekers are ‘routine in his company, not just an aberration’.

It concluded that Murdoch:

‘...exhibited wilful blindness to what was going on.’

And it found he was:

‘... not a fit person to exercise the stewardship of a major international company.’ 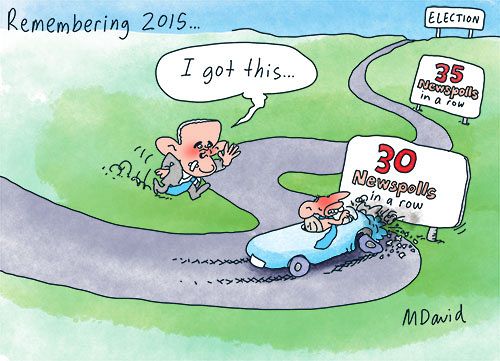 Rupert Murdoch’s News Corp propaganda machine wants Bill Shorten gone — which should tell us all we need to know about the Labor leader.

10. Finding in the Guthrie matter

‘In my view Hartigan was an unreliable witness.’

‘The explanations given by Mr Blunden in evidence do not survive scrutiny.’

In 2000, Andrew Bolt attacked Victorian Magistrate Jelena Popovic with damaging allegations which the Court found untrue. Ms Popovic, according to the Judge, 'has been the subject of a very, very serious libel'.

Murdoch’s managers appealed to the Supreme Court, where three judges confirmed 'many factual inaccuracies in the article'.

The Court held that the trial judge:

'... was clearly justified in concluding that the defence [of Andrew Bolt] had no merit.'

'Mr Bolt’s conduct in the circumstances was, at worst, dishonest and misleading and, at best, grossly careless.'

In the notorious racial discrimination case Eatock v Bolt, Murdoch’s Andrew Bolt was found to have concocted at least 19 damaging false assertions against the Indigenous people he was attacking. These multiple lies, according to Justice Bromberg, were ‘based on racial hatred or racial vilification’. The columnist was not sacked.

The above is nowhere near the full case against Rupert Murdoch.

Other concerns include the platforms Murdoch gave Donald Trump for thousands of his 30,573 lies, Fox News anchors campaigning on stage for Donald Trump with blatant falsehoods, Piers Akerman campaigning for Tony Abbott in a blue Liberal t-shirt at the 2019 election and academic findings that News Corp routinely falsifies reports on climate.

This review, however, is confined to official investigations.

The conclusion seems clear: the medal is unjustified. Those responsible should be ashamed and have this article pinned to their tawdry CVs.