Another week at Airstrip One

(1) Kieran Gilbert said Will Hodgman ‘won’ his debate with Lara Giddings — although their ‘undecided’ jury gave him 28 votes and her 62.

(2) A prime minister said he was ‘liberating’ an airline by engineering the sale of it to other governments, and called ‘insulting’ the idea that Australian engineers on good wages with ninety years’ experience who kept that airline safer than foreign engineers on cheap wages with no experience.

(3) A minister forbade a Senate investigation to go to the scene of a murder and talk to witnesses.

(4) That minister forbade those witnesses to fly south and testify to the Senate in Canberra.

(5) The minister, who knew the murderer’s name, left him in charge of the witnesses and able to threaten or even kill them.

(6) No member of Parliament asked the Minister why he was protecting a murderer, or urged the Prime Minister to sack him for doing so.

(7) No member of Parliament asked the Governor-General to sack the Minister and sends in marines, or a police contingent, to rescue the witnesses from the mortal danger they were in.

(8) The minister kept paying the murderer wages; likewise the twenty or thirty head-beaters and throat-slashers who serially, on that same night, attempted several murders.

(9) All the members of Parliament who referred to these attempted murders, and the successful murder, described them as a ‘situation’ rather than ‘crimes’.

(10) Though Nielsen showed Labor in New South Wales on 51 two-party preferred, and Newspoll, two days later, showed it on 42, no commentator remarked on the difference. No-one said News Limited, some of whose executives were on trial for crimes against many Britons, including the Royal Family, might be falsifying the information.

(11) The prime minister lied twice to Parliament, saying he and his Treasurer never disagreed, and Fiona Nash "never, ever" offered her resignation, and he was not censured, nor sin-binned, nor sacked, as convention required.

(12) The Speaker, Bronwyn Bishop, a relentlessly Orwellian figure, at one point, not untypically, said:

"All those in favour say no."

(14) After his prime minister swore there would be no less money for the disabled, the minister for employment made clear he was redefining ‘disabled’, and giving less money to all of them.

(16) After his Prime Minister said he was on a ‘unity ticket’ with Labor on Gonski, his Minister for Education abolished it.

Other things happened this week as well. A UN body listed us among Sri Lanka, North Korea and Saudi Arabia as a serial tormenter of innocent, harmless people. Our Prime Minister said ‘back off’ to the bare-chested homophobe Putin, his role model. A Speaker of the House was again accused of sexually harassing a thirty-four-year-old man, the first such charge in world history, with phone texts of the sort that are sent in millions, daily, across the English-speaking world, and in billions in other languages.

Winston Smith would feel at home in such a world, on Manus Island especially where his equivalents wake in fear at midnight, imagining torchlight, hands to the throat, manacles, beating, a steel object in the anus and sobbed prayers that bring no angel or deity to their aid. 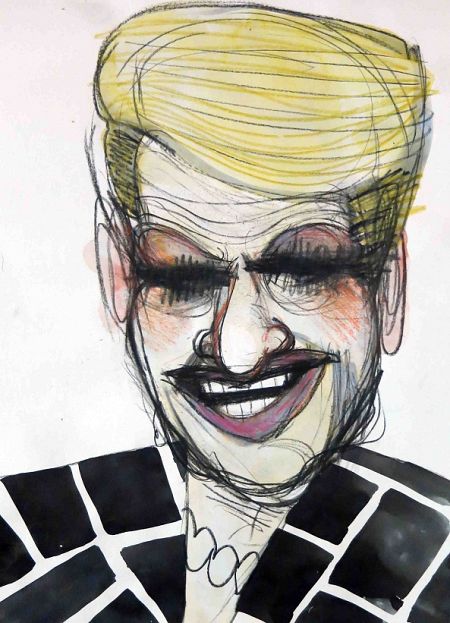