An Open Letter to Wall Street 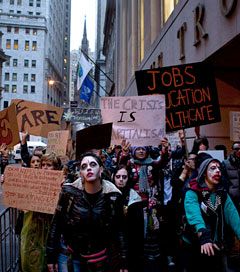 William Rivers Pitt apologises to Wall Street bankers for all the mess and inconvenience outside their offices over the last three weeks: "How is a person supposed to spend their massive, virtually untaxed bonus money on a double latte and an eight-ball with all that rabble clogging the sidewalks, right?"

Cancel my subscription
To the resurrection
Send my credentials to the
House of detention
I got some friends inside...
~ James Douglas Morrison

Before anything else, I would like to apologize for the mess outside your office. It's been three weeks since all those hippies and punk-rockers and students and union members and working mothers and single fathers and airline pilots and teachers and retail workers and military service members and foreclosure victims decided to camp out on your turf, and I'm sure it has been quite an inconvenience for you. How is a person supposed to spend their massive, virtually untaxed bonus money on a double latte and an eight-ball with all that rabble clogging the sidewalks, right?

Your friends at JP Morgan Chase just donated $4.6 million to the New York City Police Foundation, the largest donation ever given to the NYPD. You'd think that much cheese would buy a little crowd control, but no. Sure, one of the "white shirt" commanding NYPD officers on the scene hosed down some defenseless women with pepper spray the other day, and a few other protesters have been roughed up here and there, and having any kind of recording device has proven to be grounds for immediate arrest, but seriously...for $4.6 million, you'd think the cops would oblige you by bulldozing these troublemakers right into the Hudson River. Better yet, pave them over with yellow bricks, so you can walk over them every day on your way in to work.

That's what you do anyway, right? Every single day. I know it. You know it. We might as well be honest about it, and if some shiny golden bricks wind up serving as anonymous tombstones for your working-class doormats, well, that's just what they call in Wisconsin "hard cheese." You're a Master of the Universe, after all, and this recess(depress)ion hasn't touched you to any great degree. Sure, you have to shoulder your way through more homeless people these days, and damn if there aren't a lot more potholes to tax the undercarriage of your Audi R8 GT, but your money is making money at a fantastic rate, and paying taxes is for other people; I mean, come on, your accountant bursts out laughing whenever he hears the words "capital gains tax," so your egregious sense of entitlement is entirely understandable.

Now is the time to bone up on your coping skills, because three weeks is nothing. The people camped out on Wall Street are not leaving unless and until they are cleared out by force. They look all kinds of silly in their outfits, and some of their statements don't make a whole lot of sense to people like you, but they have put down roots, and you better get used to them. I'm sure the whole phenomenon is quite perplexing to you - really, why don't they just go home? Don't these people have jobs?

I hate to be the Irony Police, but that's pretty much the whole point. They can't, and they don't. Have homes and jobs, I mean. There was a guy out there a few days ago holding a sign in front of a mortgage-lending institution that read "These People Took My Parent's Home." There are all sorts of people walking around Wall Street yelling their lungs out at you because, well, they really would like the opportunity to find gainful employment, as well as a future, but that nifty shell game you and yours pulled off (on our dime) wound up immolating the economy of the common man/woman, and so the common man/woman has decided - in lieu of anything else better to do - to spend their you-created idle hours on your doorstep.

Let's face it: the mess outside your office is your doing. You and your friends bought this democracy wholesale - ah, yes, the irony of freedom is found in the way you were able to corrupt so many legislators with your money, always legally, because the legislators you bought are the ones writing the laws covering political contributions, and thus the wheel of corruption turns and turns - and now you want this democracy to do your bidding after the bill for your excess and fathomless greed has come due.

You are always taken care of - see the Citizens United decision, which unleashed you in a way not seen since the dregs of the Roman empire - but, still, there are those pesky protesters, exercising their freedom of expression in order to expose you for the brigands that you are.

They're staying put, with many more on the way - to New York as well as every major city from sea to shining sea -  and none of them are going anywhere else until people like you are taken from your citadels in handcuffs and made to pay for the ongoing rape of what was once quaintly called the American Dream...a dream that used to be something other than a dated metaphor, and can be something true and real and genuine once again, but only after we pave you under, and walk over you, on our way to a better, brighter future.


(This story was originally published in Truthout on 4 October 2011 and has been republished under a Creative Commons licence.)