All politics is global: The struggle between democracy and dictatorship

Citizens are more likely to align themselves with foreign parties that reflect their worldviews rather than their own government, writes Professor John Quiggin.

RESPONDING TO THE recent military coup in Myanmar, some commentators have suggested that U.S. President Joe Biden’s criticism of the coup is undermined by the fact that the pretext for the coup — a supposedly stolen election — was exactly the same as that raised by Donald Trump and the Republican Party in response to Biden’s 2020 Election victory.

There’s a problem in this reasoning which is easy to see, but harder to resolve. It makes intuitive sense to say that the United States should not point fingers at other countries when it has similar problems itself.

But it seems strange to say that, having just defeated an attempt to overturn a democratic election in his own country, Biden is in some way disqualified from criticising a similar attempt in Myanmar.

The answer to this question is to recognise that Biden does not speak for “the United States”, but for the Party he leads. To the extent that his party supports democracy in the U.S., it is naturally aligned with supporters of democracy everywhere, and against supporters of dictatorship, both at home and abroad.

Conversely, Trumpists in the United States are naturally aligned with dictators everywhere and opposed to democrats (with both small and capital “D”). Even though dictators and would-be dictators like Trump, Xi Jinping, Vladimir Putin and Recep Tayyip Erdoğan regularly fall out among themselves, they recognise that they are on the same side — in opposition to democracy.

The first political leader to grasp this point fully was Benjamin Netanyahu, who decided to meet with the Republican Opposition rather than the incumbent Democratic Administration under Barack Obama. Netanyahu judged – correctly, so far – that he would gain more by allying with a Party that shared his annexationist views than he would lose by undermining a bipartisan view that “the United States” should support “Israel”.

Another way to consider this is to ask whether, in a dispute with another country, most people would side with the government of their own country, or with the one closer to their own views.

It’s pretty clear in the U.S. case, that most Republicans will oppose Biden in any dispute with a right-wing dictatorship, just as most Democrats sympathised with Justin Trudeau, Emmanuel Macron and Angela Merkel in their disputes with Trump. 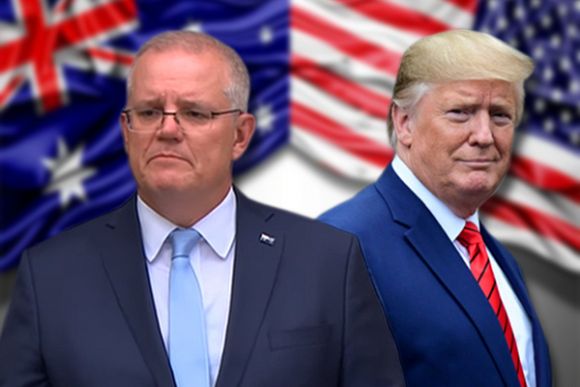 Indeed, many on the far-right have supported the coup in Myanmar precisely because the pretext is the same as that behind their own – failed, so far – insurrection.

Similarly, in Australia, climate denialists welcomed foreign criticism of carbon pricing under Kevin Rudd and Julia Gillard's Labor governments, while climate advocates are keen to see the Morrison Government brought to heel by the imposition of a carbon border tariff.

There’s nothing new in this historically. When religion was the big dividing line in Europe, Protestants and Catholics looked to co-religionists for support against rulers of the opposite creed, regardless of state boundaries. Marxists and many other socialists have long argued that “the workers have no country” .

The idea that nation-states represent natural divisions of humanity is both relatively recent and historically contingent. It’s sometimes dated to the Treaty of Westphalia in 1648 which marked the end of the Thirty Years’ War, the last great European war of religion. But the fully formed version of the idea, in which nations were defined by shared history and language didn’t emerge until the 19th Century and wasn’t reflected in national boundaries until the 20th Century.

It’s hard to know how our understanding of world politics will change in a world where political cleavages run across national boundaries rather than between them. The very name international relations presumes the opposite, and the implicit assumptions of the field reflect this.

In future, global politics may come to look like a macrocosm of federal politics in Australia. People are attached to their home state and willing to back it in a dispute with its neighbours — the re-emergence of rivalry between New South Wales and Victoria over COVID-19 policy is an example.

But everyone knows that, as far as the big issues are concerned, the states no longer count for much.

The lines have already been drawn in the global battle between dictatorship and democracy. Australians, like everyone else, will have to choose which side they are on.