Spurred on by shock jock Alan Jones and supported by PM Scott Morrison, NSW Premier Berejiklian is now facing a public backlash after directing that the Opera House be defaced by gambling advertising. 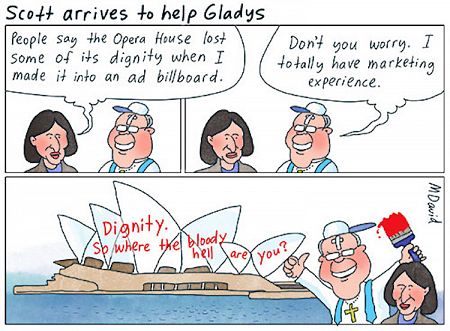 When the artist by the name of Banksy organised for his own artwork to self-shred, it was his right. It was (and is) his own artwork and he wanted to make a statement about his work being sold at an auction.

But when NSW Premier Gladys Berejiklian demanded that Opera House CEO Louise Herron allow Jørn Utzon's iconic sails to be defaced by advertising for a horse race, she was in the wrong in more ways than one.

Caving in to radio shock-jock Alan Jones' disgraceful bullying on behalf of Racing NSW, the Premier used her executive powers (via Arts Minister Don Harwin) to override Herron. It isn't what those powers were designed for and, judging by the overwhelmingly negative reaction, it won't do her any favours at next year's poll.

Dear @DiageoAustralia as owners of Pimms a sponsor of the Everest Event we call on you to condemn the bullying & disrespect by Alan Jones in the quest to secure the Opera House.

Prime Minister Scott Morrison – who seems to think it is his role to comment on everything – voiced his support, too. One wonders if he would be as forthcoming with it if the NSW Premier was of the Labor kind. That said, both NSW Labor Leader Luke Foley and Federal Labor MP Anthony Albanese thought it a great idea to promote the races in this way. Are they all in the pocket of Racing NSW and/or too afraid to stand up to Alan Jones?

Alan Jones is an angry man — one can only guess at where that anger comes from. (For more on that, read Chris Master's book, Jonestown.) One can also only wonder at how he is able to wield such influence. Business leaders, politicians, bishops, sports stars, premiers and prime ministers all take his calls. Morrison didn't even wait for the call after his ascension — apparently, his office contacted 2GB to organise an interview.

Former Prime Minister Malcolm Turnbull famously told Alan Jones that he wouldn't take orders from him. Alan Jones later called for his head — and got it.

Alan Jones has influence and he knows how to use it. For better and for worse.

When Jones is found to be so unequivocally in the wrong, as in the Wagner case – where he was adjudged to having wilfully and repeatedly lied, against the very public evidence of the Grantham Flood Inquiry – there were no consequences. His employer stands by him and, no doubt, it will foot the defamation bill. Jones has been found guilty of defamation many times before and he will again. It's all part of the product.

Ah the old fauxpology - “I’m sorry if you were offended’.

As opposed to an actual apology which should have gone ‘I’m sorry I was such a rude belligerent bully’ https://t.co/fSe64yBcaq

And it is a product that sells. His anger sells, bullying sells, the loudest voice sells. His breakfast radio show attracts one in five Sydney listeners, helping to make his station, 2GB, the highest ranking in the Sydney market by a considerable margin.

Alan Jones sells and politicians sell out to him. It's the way it has been for decades.

One of the few that have dared to write critically about Alan Jones was then Fairfax' Good Weekend journalist David Leser 20 years ago. And it appears not much has changed. At the time, Jones was furious at how Leser outed his many failed attempts at winning political office and even more so at the many disgruntled ex-employees who had been belittled, demeaned and bullied by the angry man in pink. (Jones sued Leser and Fairfax unsuccessfully.)

In Jones' own words:

And what he is about is to wield his influence wherever and whenever he can. But it is influence made possible by those who take his calls, by those who let themselves be bullied, by those too afraid to stand up to him. By those afraid that the next day Jones' ire will fill the airwaves, ruining careers or diminishing re-election chances. One can only assume that Berejiklian thought that was a lesser risk than the voter backlash she is now facing.

The success of Jones' bullying is only made possible by the cowardice of those that allow it and, in particular, our elected leaders. Stop taking his calls, stop appearing on his program, call him out for what he is — a loudmouth with an audience.

Or, to quote Chris Masters, there is

"... little that is honourable in the way that Alan Jones … exercises influence. What I came to see was politicians and corporations courting Jones because of his lack of scruples and his audience for its vulnerability to propaganda."

.@ScottMorrisonMP on using the Opera House to advertise horse racing: I would put an advertisement for the Bathurst 1000 on the Harbour Bridge if I thought it would get people there.

Kim Wingerei is a former businessman turned writer and commentator. You can follow him on Twitter @kwingerei.

Can we project pictures of the cruelty we inflict on refugees and children on Nauru on the Happy Clapper’s church? #auspol

Banking Royal Commission: The work has only just begun