IT APPEARS foreign-owned mining giant Adani lied to ensure federal and state government approval for its Carmichael Mine.

It likely lied about the mine’s veritable plethora of jobs – which now appear to be non-existent – even while planning to hire artificial intelligence.

It probably lied about the level of 'disturbance already undertaken at the mine' to the Queensland Government, while continuing the “disturbance”, unperturbed by pesky scientific details or legal requirements.

And it seems the Indian mining conglomerate was also prepared to apply pressure, “intimidate and harass” individual journalists, and the national broadcaster, to ensure unflattering information was kept from the public, on at least one occasion.

Yes, Adani seems prepared to bully governments, journalists, scientists and anyone else who might stand in its way.

For those who have been following the single-minded determination of this environmental vandal, this news is hardly earth-shattering.

What is surprising, however, is that the Queensland Government is only now prosecuting Adani for providing “misleading information”. A move that may have been handy prior to the Federal Election.

It may also be rather surprising, if not downright alarming, to discover that the Deputy Prime Minister Michael McCormack would consider that any corporation – let alone a foreign-owned one – had the right to demand anything but, particularly, personal information about government employees.

McCormack told the ABC he understood:

"... the frustration of the proponents of the Carmichael mine.”

This was ostensibly done, according to Adani, to receive

'... assurance that individuals involved in any review processes were independent.'

Does it sound as though the Deputy PM’s views are “independent”?

Earlier this year, in an outrageous betrayal of its employees, the Federal Government agreed to Adani’s request, and provided the names of five CSIRO and Geoscience staff.

Just like CSIRO Staff Association Secretary Sam Popovski, we should all be

“... shocked and alarmed that Adani was looking into the lives of CSIRO scientists.”

Emails obtained under freedom of information reveal #Adani demanded the names of all federal agency scientists reviewing its contentious groundwater plans so it could check if they were "anti-coal" activists.https://t.co/nT300inJzf pic.twitter.com/TS5yqNlEVM

And yet Adani did just that. And the Deputy PM has no problem at all with it.

According to Adani, who is aghast that anyone would have a problem with such a request, they requested the information following

“concerning reports at the time that the state environmental regulator had commissioned a review which constituted individuals who had expressed anti-coal, anti-mining sentiments.”

And, of course, Adani had a contingency plan. It hired a law firm that proposed to

‘... act as the company’s “trained attack dog” and use the legal system to pressure decision-makers.’ 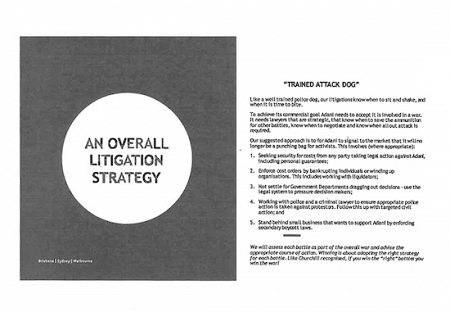 Where is the Government's outrage that a corporation should seek to bully its employees? Instead, while Adani (obviously) the PM and many Coalition Government ministers are overtly and proudly pro-coal, scientists charged with assessing the level (not the likelihood) of environmental devastation of a coal mine, are apparently expected to be “independent” — read, “compliant”.

Where does such warped logic come from?

TOO LITTLE TOO LATE

Of course, the CSIRO’s findings concerning the project must have been “independent” in the traditional sense of the word, since they indicated serious flaws with the project. But they were ignored by the Federal Government, which granted approval anyway.

And now, almost two months after the Federal Election, the Queensland Environment Department is prosecuting the mining company for allegedly providing 'false and misleading information about the disturbance already undertaken' at the Carmichael Mine.

Let’s not get too carried away about this latest development, though, as the Department also stated:

'These proceedings do not affect work currently underway at the mine site and do not relate to the recent approval of the mine.'

Why even bother with the formality of environmental reports or any semblance of authority?

In this case, it seems Adani Mining is in charge.

This is only half the story! The other part of this editorial may be read in the IA members-only area. It takes less a minute to subscribe to IA and costs as little as $5 a month, or $50 a year — a small sum for superb journalism and lots of extras.

Check out Michelle Pini on The Wire: 'What climate action currently looks like in the media landscape' https://t.co/gyturF06cc #thewire