Abbott's overreach on ABC could lose him votes

Abbott’s blatant overreach in issuing an ultimatum that Q&A come under control of ABC news is having repercussions even from blue ribbon liberal supporters. It has also provided an unexpected platform for the Friends of the ABC, reports Michelle Pini.

IT IS NOW over three weeks since the brouhaha over former terrorism suspect Zaky Mallah’s appearance on the Q&A program.

Prime Minister Abbott shows no sign of moving on with his latest ultimatum that no minister appear again on Q&A unless it is ‘moved to news and current affairs’.

This has provided an unexpected platform for the voluntary support organisation, Friends of the ABC (FABC) on which to highlight ongoing challenges imposed on the ABC by the federal government.

This is the extraordinary letter sent from the Prime Minister to ABC's chairman, Jim Spigelman: 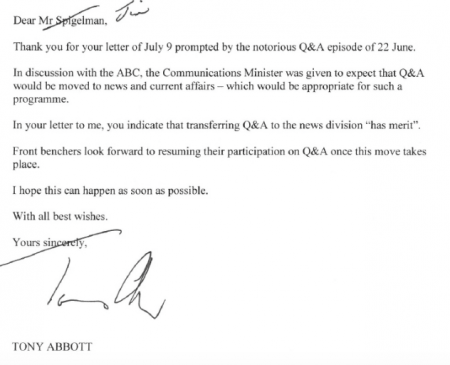 The FABC, had, coincidentally, scheduled an extraordinary national meeting in Adelaide for the day following the Q&A episode, to discuss the effects of recent budget cuts, and how these were to be addressed.

According to the FABC press release, budget cuts, ‘in breach of a pre-election promise by [PM] Mr Abbott’, amounted to 400 job cuts, the closure of regional facilities and a decline in programming and services. Further, SA president, Jessica Knight, was concerned that

‘the ABC is being seriously undermined because powerful forces are at work to destroy Australian public broadcasting.'

But the Adelaide summit turned instead into an explosion of media attention with the latest attack by the government centred on Q&A's controversial screening of Mallah’s appearance, taking precedence over any public relations strategy of the FABC.

The reaction by Abbott was not only an ironic declaration (delivered whilst discussing the terrorist threat of ISIS) that “heads would roll”, but an unprecedented set of impositions on the public broadcaster including banning coalition ministers from appearing on Q&A and ordering a government inquiry into the ABC — to which the PM referred as a “lefty lynch mob”. And the latest ultimatum from the PM – an unabashed attempt at managerial control of the broadcaster – that the producers should move the Q&A program to the news division.

FABC’s Queensland president, Ross McDowell, told the writer that the organisation suffers from a lack of support from mainstream media, but a positive effect of an “incredible” event such as the Q&A controversy is that it created “a platform to be heard”. As he explained to IA:

“It was incredibly inflammatory rhetoric from the PM: ‘whose side are you on; heads have to roll; ISIS is coming to get us’ …. and the parameters of the government inquiry have been difficult to pin down — what will they be hoping to find?”

Minister for communications, Malcolm Turnbull, who, according to McDowell, “has been the strongest ABC advocate in the Liberal government”, also jumped to Abbott’s defense on the ABC’s Insiders program, creating greater uncertainty about the government’s plans for the future of the ABC.

The likely reason Abbott would want #Qanda moved to the ABC News division is because he has some well-placed Liberal Party moles in there.

Many have criticised this approach, with the Courier Mail’s Dennis Atkins pronouncing Turnbull as

‘writing himself into history as the first minister to interfere in the editorial management of the ABC’.

Other commentators and government critics, including Greens Senator Scott Ludlam, echo this view.

‘The discussion about the editorial decisions made by the ABC is now being wound up to hysterical levels of stridency by the Abbott Government.’

ABC managing director Mark Scott’s response to the PM’s attack “deserves high praise” according to FABC members. In a speech defending the independence of the ABC, Scott said:

“The ABC is clearly Australian, it’s on the side of Australia … I hope no one seriously wants the ABC to be a state broadcaster.”

The managing director also posted a supportive tweet prior to the following week’s Q&A program:

Good luck to the #qanda team tonight - after a week of enormous pressure and scrutiny. 9.35pm. Streaming on #iview http://t.co/D7SwZM9TR1

“the ABC is independent, was set up to be independent, and the majority of Australians who value diversity and free speech want it to remain independent. Mark Scott is right. The ABC is on Australia’s side.”

This view is echoed in the blue ribbon liberal seats of Turnbull, Pyne and Hockey according to a recent ReachTEL poll.  The Australia Institute’s chief economist, Dr Richard Denniss, summed it up in The Sydney Morning Herald :

Attacking the ABC might appeal to ideological hardliners in the Liberal Party but this polling shows that, even in blue ribbons seats, cutting ABC funding and interfering with its independence are deeply unpopular.

Voters in these Liberal seats are pretty clear whose side they're on: the ABC's.

Well, this is awkward. Most voters in Pyne's, Hockey's and Turnbull's electorates oppose the $254 million funding... http://t.co/QUYURwcAPC

Bizarrely, while Abbott continues to lament what he considers to be a lack of balance in ABC reporting, he may also be contributing to any such bias.

“Let’s consider the scenario which unfolded: the PM criticises Q&A for being too left wing; then tells his ministers not to appear, thereby taking away the right wing commentary; and then says, ‘See, I told you it’s too left wing!’ ”

Abbott’s reaction has also managed to impart to the Q&A episode, which he claims has been over-exposed, even more publicity.

Victorian FABC president, Graeme Connelly, explained to IA that in a planned national “call for action” the group intends to establish a “fighting fund” to defend the national broadcaster from further budget attacks and government intervention, and

“ensure it maintain[s] an independent voice that continues to reflect Australia’s cultural identity."

"Without immediate action to stop the attacks on the ABC, Australia will lose the skills and leadership of its very highly respected national broadcaster.”

In what may further exacerbate the PM’s problems, the FABC is intending to maximise current media attention and rally public support for the national broadcaster via its Facebook page: 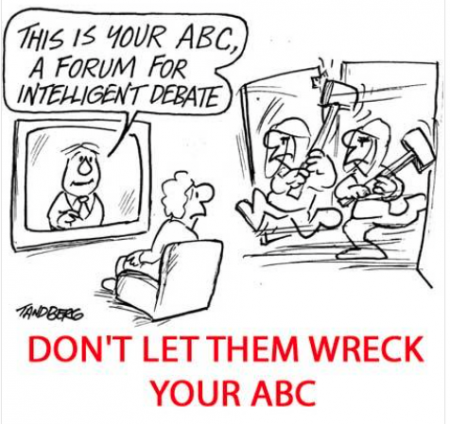 FABC's message is sure to appeal to voters of all stripes:

'Don’t let them wreck your ABC. The ABC is under attack like never before. We need your help NOW. Visit www.abcfriends.org.au to support the fight before more damage is done.'

Spokesperson, Margaret Reynolds, issued a warning on behalf of the public to any politician foolish enough to meddle with the ABC's independence, telling IA

“We’re all united and our prime focus is protecting our national broadcaster. We need to mount a strong national campaign so that any government or aspiring government can see how important the ABC is to the Australian public.”

“In view of an impending federal election, we want to call politicians to account about whether they support public broadcasting and the ABC in particular.”

EDITORIAL: Andrew Thorburn, Matthew Guy and the politics of prosperity and hate

29 September 2022, 8:00am It is only fitting that the Royal Commission into the Robodebt disaster will likely ...
Join the conversation
comments powered by Disqus
News updates