Dumped Prime Minister Tony Abbott has announced he will be touring marginal seats during the election campaign. David Tyler is delighted. 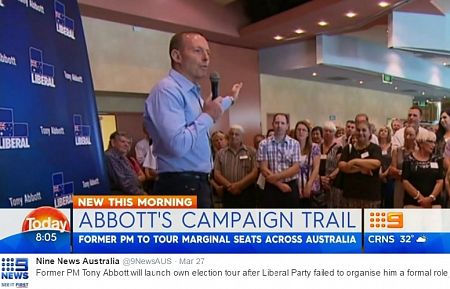 Since losing the prime ministership, Tony Abbott, an MP since 1994, declared that he would like to continue to

"... make a contribution to our public life."

Or so he says. Do we have it in writing?

A born team player, Tony's organising Tony Abbott Unplugged! The Tour, his own mobile "protect my legacy" election campaign in marginal seats, because no-one officially invited him to take part. Would any sane Liberal apparatchik want him anywhere near a voter? Stop the votes!

Someone should tell Tony that if you can't make a contribution in 22 years, you are wasting your time. And other people's. But let's be fair, it's not as if he has contributed nothing. By most people's reckoning, Abbott made a negative contribution — a leadership deficit his party is still paying for. The country has yet to recover. Tell him he will go down as a footnote of political history; a human wrecking-ball.

But nobody ever could tell Tony Abbott anything he doesn't want to hear. And just because he walks on two legs, it doesn't make him human. Ask Erich Abetz. The android Liberal spear-carrier's mission is to flatter Abbott by incessantly demanding his hero be returned to cabinet. Reinforce his delusion of a return to power.

This week, Abetz is detailed to help Abbott "make a contribution" by bagging Turnbull. He dredges up Godwin Grech to remind Fairfax readers that unlike his hero, Turnbull is not just Machiavellian, he lacks both judgement and character.

Eric Abetz angry about workplace flexibility in his own workplace https://t.co/slHHooGQgx Alleges he was unfairly dismissed to backbench.

Voters will make up their own minds. A ReachTel poll last December found that most of voters in Abbott's safe Liberal seat of Warringah want him to retire.

Abbott's response was a counter claim, on SkyNews:

"I've had literally thousands and thousands of messages of support and encouragement since mid-September."

He's not mentioning the hate mail. The death stares. Those folk, peerless IA columnist Bob Ellis says who 'vomit at the sight of him'. The list is growing. Abbott's incessant war of words on his nemesis, the oleaginous spiv now in power, have not endeared him to former supporters. Former Liberal leaders, advisors and political experts insist Abbott call it quits.

Liberals want to protect a conflicted, divided, party in trouble with ICAC in NSW for concealing the identity of donors, a shifty move which could cost it $4 million in campaign funds unless it dobs in its sponsors. Luck with that. They fail to see Abbott's prime ministership as a symptom of their mess. What they do see, however, is that Abbott's hanging around only to white-ant the current leader and whinge that he should take his place.

Liberals know the damage Tony did last time he tried to be leader. Journalist and Liberal Party insider Niki Savva records in The Road to Ruin how Abbott retreated into the PM's Office, giving extraordinary power to his assistant Peta Credlin, overwhelming her. Credlin coped by obsessing over small details when she could not manage the large.

Part of Abbott's legacy, his "contribution" is his unconditional support for a woman who enjoyed abusing her power and her staff next to poring over renovations for The Lodge, whose budget blew out to $11.61 million dollars, five times the initial estimate, causing Malcolm Turnbull to call in the auditors.

Despite the mud-slinging from pro-Abbott quarters and Peta Credlin, Savva's account is not invention, or unsubstantiated rumour, or Turnbull's revenge, but testimony from credible sources who suffered the Credlin captivity of the PMO.

How a picture of Tony Abbott led to Peta Credlin's legendary blow up https://t.co/hn8jrnwYni via @MailOnline

Not only did Abbott and Credlin collude to strangle vital communications with MPs, they helped cause policy and management paralysis with their apparent obsession for centralised control and total lack of trust. They also allegedly conspired to wreck people's lives. Savva records many who were bullied off the job.

“... the dysfunction was hidden in the early days, spoken about in whispers, intimated. But it didn’t take long for the initial courtesies to be done away with and for the dysfunction to surface."

MacMillan said the working environment was like a hostage setting:

“The office was regularly held hostage to Peta’s moods. She would disappear, be uncontactable — or, worse — be present to single people out in group settings, and bully them.’’

Fellow staffers Shane Evans and Fiona Telford also testified to Credlin's volatility and lack of respect. Tony Abbott aided and abetted such abuses of power by endlessly appeasing Credlin, expecting her to do his job for him. The prime ministership was a another job he couldn't do.

Abbott got into politics after being not that good at anything else. Even a nation largely indifferent to politics could see he wasn't cut out for PM after his first budget, where he broke all his promises. Someone needs to tell him to go.

But what good what that do? Clearly Abbott believes he has made a contribution, and not just his gifts to our language such as the three word slogan, his suppository of all wisdom or his two kinds of promises. Those you hear from his lips and those which are true because he's put them in writing.

It's casuistry worthy of a Jesuit if only it were worth anything at all. Most of Tony's words are like that. But that's not how he sees himself.

You only have to read the narcissist's latest Quadrant essay modestly entitled 'Why I was Right about National Security' to see that in his mind he was an enormously successful prime minister at home and on the international stage, with a government whose every action was calculated not for show but to make a difference.

In other words, Abbott is a seriously, irredeemably, dangerously self-deluded egomaniac. Or simply full of it. Or both.

Does Australia need further public displays of brown onion-eating? Do Australian Muslims need another dog whistling politician out to whip up a bit of hatred to serve his own ends? Do we need another protector of privilege who will subsidise big business but wage war on the poor? Do we need the architect of disadvantage to crow over how he defunded hospitals and schools to the tune of 80 billion?

Perhaps we do. Perhaps Abbott's "contribution" is the best thing that could happen to a Turnbull government. After all, it still follows most of Abbott's wretchedly ill-devised "reforms." It continues his hostility to climate or any other science. It reeks of his homophobic mistrust of social progress over marriage equality and his wholesale embrace of an IPA agenda, because neither he nor his successor have any worthwhile ideas of their own.

If you need any help with fuel for you campaign bus, Tony, I am sure we could organise a quick whip-round.

Abbott stopping the votes on the hustings in the marginals? Abbott reminding everyone that Turnbull's Government is the same python with a different head? Abbott helping the Liberals to a thoroughly well-earned break from power?

Tone Abbott kicks off his One Man Band tour of Australia
Check your local guides for date/venue detailshttps://t.co/R4FPWswLdq via @youtube