The IPA, Friedrich Hayek and the 'socialist conservative' — Tony Abbott

In the wacky and dangerous world of the IPA and its backers, Austrian economist Friedrich Hayek rules and people like Tony Abbott are regarded as socialists, writes Ross Jones.

On a recent balmy Sydney evening, I was comfortably set up in a pub down near the Quay — about 6pm, the heat gone from the day, the beer cold.

Better, I was with a few old friends. Better still, one was still employed by a bank and we were drinking on its tab. What could go wrong?

Well, one chap, a man I’ve known for a long time and whose professional intellect I have always respected, informed me he was a paid-up member of the Institute of Public Affairs — the IPA. Apart from spurting beer, I handled it pretty well.

It was a tough night. In some pubs you can converse at normal conversational volume, but not CBD pubs in summer. You try arguing Hayek over classic rock played loud and proud.

The writings of Austrian-born economist and Anglophile (read suck), Friedrich August von Hayek, are the intellectual spine of the IPA. FA shuffled off the mortal coil back in 1992 but, in his 93 years of life, he left an intellectual legacy rubbery enough to be abused and misused by every opportunist who cared to do so.

Margaret Thatcher was fond of silencing her opponents with pithy Hayek quote.

But there are precious few of these. Das Kapital reads like manga comic in comparison to anything written by Hayek. Have a read and I defy you to stay awake for more than five minutes.

It’s not that he was a dill — far from it; out there flawed genius is more like it. Friedrich was awarded the 1974 Nobel prize for economics.

FA’s world view was formed through the depression and WWII tough times. Forget left and right, Hayek goes way outside the box and argues planning sucks and untrammelled spontaneity rules.

In the way of all economists, Hayek created a jargonised universe which, on first reading (zzzZZZ) sort of makes sense. But when you wake up, it’s a bad dream.

Fred’s seminal (?) work, ironically-titled, The Road to Serfdom, published in 1934, really just recorded what was already happening — which, in the early 1930s, was not good.

In this regard, Hayek can be considered more perspicacious than Keynes or Friedman. But Thomas Piketty? I think not.

In much the same way, the tiresome Hayek, who was essentially a grasping parvenu happy to justify the avarice of his admired mates, simply recorded power as he saw it, Picketty records the simple fact that economic power is accreting to a few serious families at an accelerating rate. Thomas is a best seller, FA was not.

But despite his desultory sales, limited to economics-porn bookshops, the IPA brought FA to Australia in 1976, just in time to put the heat on Fraser.

In a commentary on the great man’s visit, the IPA noted:

Back to the pub.

Over free beer and rock’n’roll, my drinking-buddy said of the IPA, and I paraphrase:

Our political Venn diagram and the Prime Minister's only have a small area of overlap. He is a socialist conservative and we are not.

So there you go. The IPA consider Abbott a socialist conservative. I believe the online jargon response is FMD.

I am betting none of the IPA backers – the movers and shakers – have ever really read Hayek. That sludge-like task is best left to the troops who have the time. But they love the idea of the ideas conveyed to them by these loyals.

So, when you see Abbott smooching up to Gina, or his right arm hovering over Rupert’s buttocks, you now know both are thinking:

Socialist Conservative! Get off me! But, okay, right now you are handy.

Economics 101, with its indifference curves, optimisation and efficient resource allocation, was never more than a charming fantasy — so much so that introductory students’ first model is often Man Friday and its attending parable of labour specialisation and serfdom.

Hayek would have it Man Friday’s inability to understand the words "Get coconut" seriously impaired Robinson’s ability to harvest every coconut on the island and flog them to every pirate ship that happened by. What else can you do with people like this? Point out every coconut? They deserve a life on the beach, left only to aspire to Robbo’s pirate-built condo high on the bluff.

Robbo’s big problem was that there are seven days in the week and he only had Friday — labour shortage looming. 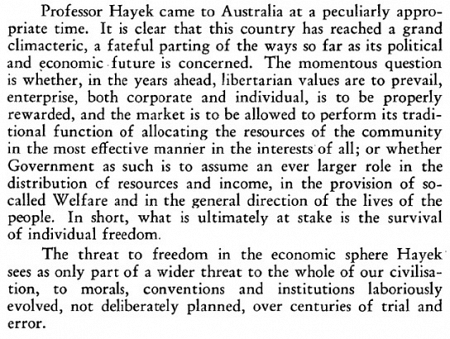 Apart from the ‘grand climacteric’, the existential threats to our freedom, and ‘the wider threat whole of our civilisation’ are real.

In Australia, it is called the IPA.