'On Sunday, on the smallest continent on earth, occurred the biggest mass demonstrations for thirty years.'

Utopia claimed that 'a solid alliance of resistance across all strata of the population' had mobilised to protest 'the deliberate destruction of society by the Australian government'.

'...seeking asylum in Australia to escape the torture, rape and violence they suffer at the hands of the local army.'

Headlines around the world have condemned this, the latest of the Abbott government’s anti-refugee tactics. In damning terms. 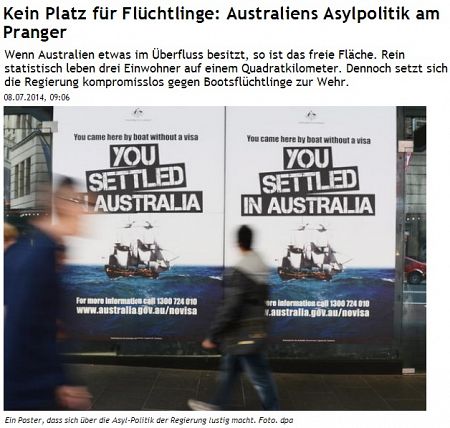 She noted with dismay that the most sparsely populated continent on the planet has nowhere near the problems with new arrivals of other developed countries.

Headline in The Metro Journal in France:

'This was the first time that the government of prime minister Tony Abbott forced asylum seekers to return directly to their country of origin.'

'High Court of Australia prevented Sri Lankan refugee deportation due to threats to their security'.

The Sri Lankan refugees are providing the seventh topic for extensive damaging reports on Australia just this year.

The first was Abbott’s embarrassing trip to Davos in January, during which the few mentions in the international press were all negative.

The second was the May budget which astonished the world with its callous attacks on the poor during a period of conspicuous economic success.

Analysis by London-based The Economist was headlined, ‘Slashing and burning’.

‘It's a bit rich for Tony Abbott to lecture the US on fair taxation’.

‘An Uproar in Australia Over Proposal to Deregulate Tuition’.

‘How Australia’s winking Tony Abbott became one of the world’s most unpopular prime ministers’. 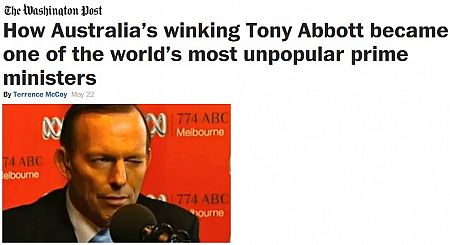 '... quickly becoming one of the world’s most hated prime ministers.'

Le Figaro reported both Abbott’s failed May budget and his notorious sleazy wink – 'clin d'oeil maladroit' – during a radio interview. It added that Abbott is 'réputé pour ses gaffes' (famous for his blunders).

The third generator of global gobsmacks this year was Abbott’s ill-fated visit to Indonesia, France, Canada and the US last month.

The French Courrier International asked in alarm of Abbott: 'vit-il dans le passé (does he live in the past)?

New York- based International Business Times titled its report on Abbott in Canada:

As far away as Argentina, the media ran a piece:

Press in Canada was plainly humiliating.

‘Stephen Harper and Tony Abbott deserve each other'.

Author Christopher Hume described the pair as 'Gollum and Mr. Potato Head' and a 'matched pair of fossils' who

'... in their short-sighted neglect of global warming ... let cash rule everything around them.'

The fourth cause of international embarrassment was John Oliver’s viral American TV video lampooning Abbott by simply stringing together about ten of his more excruciating public moments.

It has generated a remarkably amount of commentary around the globe.

‘Between the malaprops and other bumbling, this might just make you feel better about your leader, wherever you live.’

‘The most grotesque spectacle in recent years has been that of an Australian prime minister on tour in the United States.’

‘You'd think that being the leader of a country in the free world would mean that you're a well-rounded and media savvy individual. Think again.’

‘Neatly sums up just how appalling Tony Abbott Is.’

‘Australia is led by a narcissistic clown.'

Sixth was Abbott’s profound insult to Indigenous people last Thursday, when he claimed Australia before the British arrived was

Russia’s news service Bigmir.net titled its story on this

'In addition, they are simply wrong. Peris added that this statement negates all efforts to consolidate the status of Aboriginal people in the constitution.'

So it seems another Australian prime minister has captivated most of the world’s media. Much as happened almost two years ago with a certain famous misogyny speech aimed at a certain misogynist. 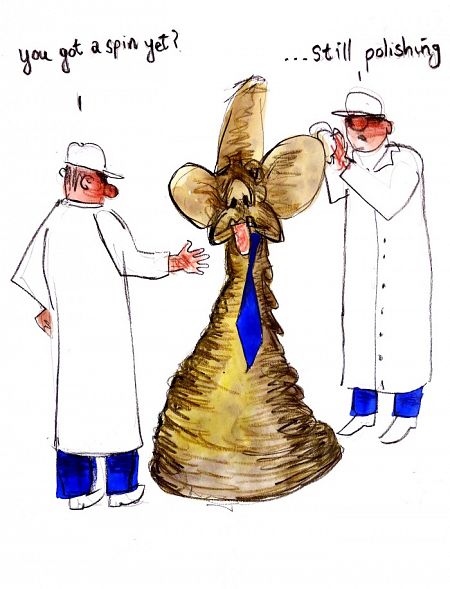