TONY ABBOTT AND JOE HOCKEY have just received three pieces of strategic advice from one of the sharpest tools in the global economics shed. For free.

Professor Joseph Stiglitz from New York City's Columbia University is in Australia. Stiglitz’s razor edge in global economics was honed teaching at Yale, Princeton and Oxford, and then as chief economist and vice-president of the World Bank in the late 1990s.

He won the 2001 Nobel Prize in economics for researching how markets are distorted by bad information. He shared the 2007 Nobel Peace Prize for his work on climate change.

Messages Stiglitz delivered forcefully this week on ABC Lateline and PM, as well as elsewhere, include:

His timing is fortuitous, with the new Senate about to convene, and several Budget bills up for debate.

On Australia’s progress through the global financial crisis (GFC), Stiglitz was emphatic:

“You have actually had until now remarkably good economic performance. I think Australians may not fully appreciate that you are one of the economies that have actually delivered — that most citizens’ incomes have increased year after year. You have a minimum wage that is twice that of the United States.”

In Opposition, Abbott and Hockey hailed their plans to increase the nation’s assets for future prosperity:

“We will build the roads of the 21st century because I hope to be an infrastructure prime minister who puts bulldozers on the ground and cranes into our skies,” Abbott told the 2013 Federal Coalition campaign launch last August.

Now in office, however, Abbott wants to flog off – that is, privatise, or what they now call the Orwellian sounding "asset recycling" – enterprises and infrastructure built by previous generations — assets which, before the election, he claimed

“... determine our quality of life as well as our country’s productivity and prosperity.”

“If you were a firm and you could borrow at very low interest rates – and Australia, the United States are currently able to borrow at a negative real interest rate – you know, taking into account inflation. And you could take that money and you could invest it in high-return investments in infrastructure, technology, education, in people, in making sure that all of your citizens are able to live up to their potential, then these investments more than pay back.

“We've done studies in the United States where we looked at the return on these public investments across the board and they yield a far higher return than the cost of capital.”

The claim that the private sector operates with less waste than government is, according to Stiglitz, false:

“The private sector wastes a lot. And in fact, no government has ever wasted money on the scale of America's private financial system, which has cost us trillions of dollars. But if you don't make these investments, you're wasting resources.”

Ultimately, the validity of the decision to build or sell assets will be shown in the future. Most of those making these far-reaching decisions will not live to see either their success or their folly.

So can we learn from the recent past?

As the Independent Australia Ranking on Economic Management (IAREM) has shown here at IA, the world’s economies fared vastly differently through the GFC. Some rose dramatically, some slightly. Some fell marginally, while others tumbled disastrously.

Analysis in March showed that the top eight economies at the end of the GFC were all countries with a strong commitment to maintaining government-run enterprises.

An alternative approach is to look at the success or otherwise of countries which have privatised most in recent decades.

If Hockey and Abbott are right, those economies will have done better than most. If Stiglitz is right, they will have performed worse.

There is no ready-made table of nations by private ownership, unfortunately, but considerable data is available online here, here and here.

The Netherlands has partly privatised railways and hospitals. It has completely privatised the post office, telecoms, prescriptions, oil and gas, the energy utilities and airports. Only the water supply remains public.

Ireland has partly privatised hospitals, energy, water and airports. It has completely privatised telecoms, prescriptions and oil and gas. The post office and railways remain public.

Italy only owns its post office. It has completely or partially privatised all other services.

Russia has probably seen the most extensive privatisation in recent decades. Only the postal service and the railways remain government-owned.

So what happened to these five economies through the GFC? Did they all zoom ahead, leaving the sluggish nations weighed down by government inefficiency in their wake?

Well, actually, no. They didn't. The opposite is, in fact, the case.

All five fell in their raw scores on economic wellbeing overall — as measured by the eight key variables which make up the IAREM scores. And all five tumbled in the rankings.

Ireland fell from a comfortable 14th place down to 32nd. The Netherlands fell from an even better 12th place to 20th. Great Britain fell from 21st to 27th. Italy and Russia fell more marginally.

This seems further prima facie evidence that Joe Stiglitz is right and Joe Hockey and Tony Abbott are wrong.

Fortunately for Australia, some new Senators have signalled opposition to the asset sales — so we shall see how the debate proceeds.

Will they heed Stiglitz’s advice and thus demonstrate their cutting edge? Or will they prove spanners in the works like Hockey and Abbott?

Only time will tell.

You know it's a "budget crisis" when the muppets get involved! #auspol #BudgetCrisis #hockeynomics pic.twitter.com/khtTfgiyOD 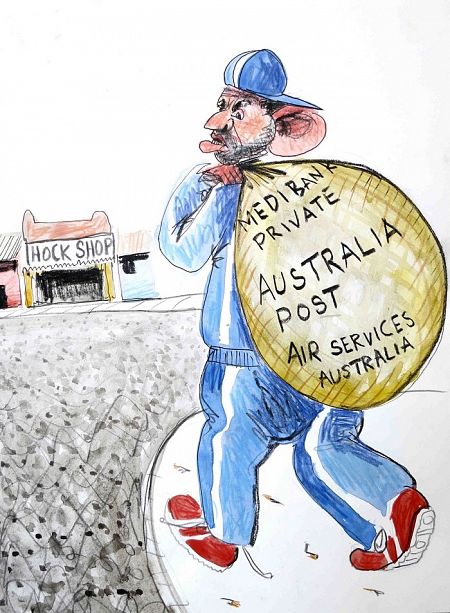 29 November 2021, 7:00am Recent economic data brings the tally of failures in economic management by Prime ...

15 November 2021, 7:00am Households are getting a lower share of the nation’s income than ever before ...
Join the conversation
comments powered by Disqus
News updates