A potato of integrity? It's a fair cop

It seems strange to think, but only a few short weeks ago, Home Affairs Minister Peter Dutton came within three votes of becoming Australia’s prime minister.

A week is a long time in politics, because now Dutton finds himself besieged on all sides. Under fire from females in his own Party over bullying claims from his supporters, threatened with expulsion from the Parliament over a s44 Constitutional issue from to his investments in childcare centres receiving payments from the Commonwealth, and engulfed in a “visa for mates” corruption scandal, in which he seems to have misled Parliament.

On top of all that, he is also enmired in a messy feud with a former friend and colleague in the Queensland Police Service — one he picked out to become his very first Border Force Commissioner. Yesterday in Question Time, Dutton accused this man, Roman Quaedvlieg, of losing his job after “grooming a young woman 30 years his junior”. He had previously further smeared the same man, saying he was suffering from a “mental illness”. Dutton was also seen in Parliament yesterday carrying two large ring binders labelled with the names of former Labor immigration ministers Chris Bowen and Tony Burke. The idea that the minister in charge of the AFP and ASIO was threateningly carrying around large dirt files on his political opponents has been a chilling sight for some, invoking comparisons to notorious former FBI boss J. Edgar Hoover.

Is potato head get his staff to print off those names & stick them on some random folders as some form of intimidation?

It was only a few weeks ago Dutton was talking about how he wanted us all to see his happy, smiley side. That side was not in evidence yesterday, as a scowling Dutton lashed out and revealed the devil lurking within. That this deeply damaged and flawed individual should resign from the ministry and probably the Parliament is obvious. But he won’t. Because belligerent, pugnacious, obstinate Dutton sees himself as a “person of integrity”, with a “distinguished background as a police officer in Queensland” and that’s all that matters.

But how true is that statement?

A PERSON OF INTEGRITY?

Many people would take umbrage at Dutton’s self-description as a “person of integrity”. If integrity is defined as having strong moral principles, it is highly doubtful a bully with a total absence of compassion would qualify — and Peter Dutton is, indeed, a pitiless tyrant. As Minister for Immigration, for years he ran Australia’s system of offshore torture camps, thereby causing untold pain and devastation to thousands of innocent people. This includes causing a large number of suicides and deaths through lack of proper medical care. Recent reports indicate children, in particular, have been so traumatised by the experience many will probably never fully recover. Also indicative of his lack of compassion was when, in 2015, when he was caught joking about “water lapping at the doors” of Pacific Islanders suffering the catastrophic effects of climate change.

It is also doubtful a racist and a bigot could truly qualify as a “person of integrity” — and Peter Dutton is a bigot and a racist. Racist towards Indigenous people: he walked out on Kevin Rudd’s 2007 Apology to the Stolen Generations. Racist towards Lebanese people: saying there were too many in the country and that they were terrorists. Racist against Africans, whom he said earlier this year were terrorising Melburnians who were too afraid to go out to restaurants — a complete fabrication. And bigoted towards refugees in general, such as in 2016 when he described them as being illiterate and innumerate, “even in their own languages”. Except for White South African farmers, who he felt should be fast-tracked into the country. Dutton also, of course, opposed same-sex marriage. And there are numerous other examples.

But it is the other part of Dutton’s statement, about his self-professed “distinguished background as a police officer in Queensland” that is truly intriguing. The truth is, there is little on the public record about Peter Dutton’s career in policing.

Here’s what we do know.

He resigned from Queensland Police in 1999 — just months before he would have become eligible for a lucrative service pension.

Dutton said he quit because "I'd decided that I was going to run at the next [2001] Federal election.”

He did run in that election, against Cheryl Kernot in the seat of Dickson. During the campaign, Kernot told journalists they should question why Dutton quit the police force when he did. Dutton responded angrily, calling the statement "offensive and preposterous", before producing some positive references from the National Crime Authority.

IA does not know the circumstances of Dutton leaving the Police Service, however, it does seem reasonable – and not “preposterous” – under the circumstances, to question whether it was entirely voluntary. Why did he not wait a few more months before resigning so as to receive a generous stipend for life?

Independent Australia makes no claim that Peter Dutton has in anything other than the distinguished record as a police officer he claims. It would, however, be good for him to table his full Service record to clear up any unfortunate misconceptions that might arise.

Peter Dutton has been embroiled in controversy after intervening to grant a visa to the au pair of former Queensland Police colleague Russell Keag. Dutton had told Parliament in March he had “no personal connection or any type of relationship” with any of the people for which he had intervened to secure visas, which was clearly an outright lie when it came to Keag. Lying is probably not the sort of thing a “person of integrity” would do.

But it is the tone of the email Keag sent Dutton IA found most interesting:

I need advice on a matter that occurred today. An Italian student, Michelle Marchisio, is being held after her visa has been cancelled. She was due to stay with my family. There was a mixup in the visa details. She is currently being held in the detention centre.

Give me a call please for advice re this matter. 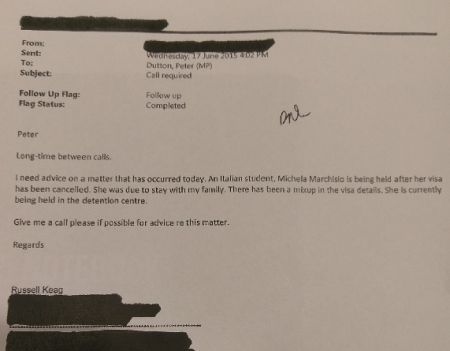 Maybe it is just us, but the cursory tone of the email strikes an odd note.

It is not the tone of someone who is barely known to the other and has not been in touch for 20 years. There were no niceties, or pleading, as one might expect under the circumstances, just a rather businesslike and perfunctory request.

It is almost as if it was routine or commonplace. Like a superior, someone with the whip hand, who knows the request must be granted, making a request of a junior. A mere formality. As if Keag had some sort of leverage over Dutton — maybe some information that would be very awkward if it found its way into the public domain.

Or maybe not. But until Dutton releases his full Service history, there may be speculation…

This is only half this story! The rest of this editorial was originally published in our weekly subscriber only newsletter and may be read in the IA members only area HERE.

Access the members only area by subscribing to Independent Australia HERE.