Usman Khawaja managed to save the test in Sharjah, but is it enough to save Australian cricket? John Coop reports. 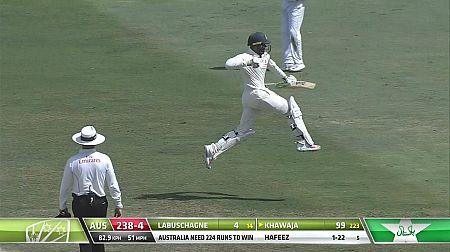 WELL, THAT was a surprise! Against all the odds. Australia’s men’s cricket team defied filthy heat and humidity (37°C and 50%), no crowd to speak of cheering them on, a spinner’s paradise of a pitch and not least the saga of Cricket Australia over the last two years, to salvage a draw in the first test of a new series with Pakistan, held in the United Arab Emirates. Usman Khawaja collecting 85 in the first innings and a remarkably stoic 141 off 302 balls. Remarkable in that he had very little support from the "big name" players (looking at you, Mitchell Starc and the Marshes) in his nearly nine hours at the crease in his match saving innings. Support came from new cap Travis Head (72)  and newly installed captain Tim Paine (61*). In the end, a true nail-biter with play finishing with two wickets left and the resolute Aussies still short of the total by an even 100.

But how did we get to this situation when a draw with the seventh ranked side was worthy of killing the fatted calf, by the looks of celebration on the players balcony at the Dubai International Cricket Stadium?

#GoldCoast #WebDesign Fans hit out at ‘crass’ podium for Ashes trophy presentation for Australia’s 4-0 win: OUTRAGED fans have taken aim at Cricket Australia for their stage design for the Ashes trophy celebration ... But rather than praise Smith and his… https://t.co/rnTWjAB3Wu pic.twitter.com/24gUBwJRyU

Last summer (17/18), cricket across the country was seen to be in rude health, even after the bitter pay dispute, the players being strangely well-led by Australian Cricketers Association rep, Shane Watson. The much awaited new media rights deal injected $1.2bn over six years, while the Big Bash League (BBL) 17/18 attracted over 1 million through the gates. The Australian Women’s team continued its rise in search of world domination with salaries increasing across the board for contracted players to over $70,000 per annum. The Ashes returned (metaphorically if not physically), the captain was unstoppable, we had three fast bowlers and a spinner who all took wickets. (Smith 687 @137.40, Starc 22 @23.54, Cummins 23 @24.65, Hazlewood 21 @25.90, Lyon 21 @29.23) Cricket Australia employed some classic "Where The Bloody Hell Are Ya" marketing, with the sadly characteristic crass manner it mocked the losing tourists in a 4-0 finger gesture that raised ire on social media as well as the actual media.

Very happy to win 4-0 but very embarrassed with the tacky presentation set. I was taught to be humble in victory. Terrible. #Ashes #Ashes17 pic.twitter.com/qXMuEpAkv9

Then, boom! ODI demolition by England (4-1), the South Africa debacle, and 3-1 defeat, captain and VC sent home in disgrace, the "C" word, the coach walks and then, finally, Sutherland resigns.

To be fair, the sides, across all formats, haven’t really dominated, despite the rhetoric of Cricket Australia (CA).

Australia cleaned up against Pakistan with a 3-0 series win followed by a 4-1 victory in the ODI series. However, after that there was little to get excited about. Sri Lanka went the long handle to win a T20 tour 2-1. The Chappell-Hadley was then won, over the ditch 2-0 (out of 3) by the Black Caps. India were next for 4 tests, Australia winning the first, then losing two and drawing one of the next three; Border-Gavaskar trophy gone. The ICC trophy in England, after the gap for the IPL, recorded: played 3, won 0, lost 1, the vagaries of a British summer dealing the cards for two no-results. So, at the end of this six month period, the record was less than inspiring. A drawn series in Bangladesh, after players threatened to walk out , then back to India to get demolished in an ODI series 4-1. Then The Ashes, whilst the 4-0 scoreline looked good on paper, all tests went to five days and England would consider themselves unfortunate that all three of the Australian quicks were inexplicably fit.

After the South Africa calamity, the air was thick with schadenfreude, as the English press relished the opportunity to stick the broken stump, bails deep into the Aussies.

In their first Test match since the ball-tampering scandal, Australia produced a gutsy effort against Pakistan https://t.co/ZpgfOCYTRh pic.twitter.com/ZYBpzFf8dk

As Australia looked to the CA leadership, it came up wanting.

With Lehman leaving, a new approach might have been sought, but again Sutherland and the gang flattered to deceive with another "in-house" appointment from the golden years of recent Australian cricket. All this after CA had rejigged the structure, whilst not really addressing some interesting links between management, potential conflicts of interests and cosying up to broadcasters.

As for the new coach:

“We want to see them being good blokes."

Really Justin? So as long as behaviour passes the pub test it’s okay? Six years as head coach of the WACA, 2 one day cups a BBL trophy and rave reviews from the usual suspects has seen Langer installed as the saviour. A lack of success in long form cricket should have been flagged by the selection panel, but it appears it’s more about how mentally tough your blokes are, and having a “no asshole rule”. A national body looking for a change in culture might have thought about someone from outside of the tent? (Perth is a long way from the MCG, but it’s still in Australia) Jason Gillespie was the obvious choice for me, maybe too vegan though. It could easily have been Paul Collingwood who has got the cricket smarts, people skills and experience outside of the pissing competition CricAusInc™️ has become. Shaun Pollock (currently on the ICC committee), Waqar Younis (twice former head coach of PCB), Anil Kumble, or even an unproven V.V.S. Laxman (on the Cricket Advisory Committee of BCCI) could have made a difference to the cricket, but again, mainly, the culture.

NOW AND INTO THE FUTURE

The JLT domestic One Day Cup has finished and Victoria have won apparently. Pakistan have just batted for nearly two days and Australia batted out 140 overs to save the test in Dubai. There were three new Baggy Greens presented and who knew?

Where does CA see itself in three to five years? Maybe a 20 team BBL? Tests against England and India only?

The perceived desire to generate any interest over the coming Test summer has been woefully inadequate. The hiving off of international one day international and T20 to Fox Sports might be financially astute now, but what will be the impact down the track.

It seems clear the BBL is the goose that is full of golden eggs and all areas of cricket are now intrinsically linked to this ever widening window of corporate opportunity. What about the fans? Does CA care? I’m not sure anymore but let’s face it, it appears that professional sport is just gaps in the adverts.

New Australian coach, Justin Langer has hailed the fighting spirit of his inexperienced team, after their marathon effort to force a draw in the First Test against Pakistan. #7News pic.twitter.com/KfkzLQzawH

14 October 2018, 11:00am Usman Khawaja managed to save the test in Sharjah, but is it enough to save Aust ...
Join the conversation
comments powered by Disqus
News updates